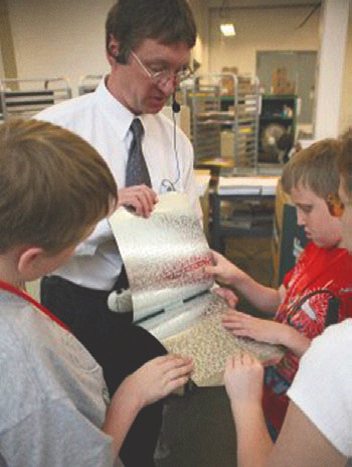 In celebration of 160 years in business, American Printing House for the Blind invited the community to its anniversary Open House.

Louisville is known for manufacturing many products, but even before the Louisville Slugger® bat was created, and bourbon was first bottled, the American Printing House for the Blind (APH) was founded in Louisville to develop and produce educational materials and provide services for people who are blind and visually impaired. Since 1858, APH has been evolving to support people with vision loss as they navigate the world. As a vital part of the Louisville community, APH employs 300 people and offers over 1,000 products online and by catalog, including materials in braille, large print, audio recordings, and accessible technology. APH is now the world’s largest company committed to providing educational and daily living tools for people who are blind and visually impaired.

In celebration of 160 years in business, APH invited the community to its anniversary Open House on Tuesday, January 23, 2018. Headquartered at 1839 Frankfort Avenue, the public can tour the facility and see product demonstrations and exhibits about the variety of educational and learning materials produced at APH. This includes textbooks, restaurant menus, accessible technology, and computer software such as Visual Brailler, an app that works with iPad®, and the “Indoor Explorer” personal navigation app recently launched at the Louisville airport.

“As we look to the future we are aware the world is undergoing rapid change through technology but there are still too many instances where the population which experiences vision loss is being forgotten,” said Craig Meador, president of APH. “It is our goal that by partnering with many we can have an impact on the world so that  accessibility for all will be a norm and not an afterthought.”

A special presentation will take place at 11:00 a.m. with speakers from APH, elected officials, and guests. A National Writing Contest will be announced during the festivities for visually impaired students and adults, as well as professionals who work with them. The deadline to submit work for this national contest is June 1, 2018. The  winning entries in each age group will be announced at APH’s 160th anniversary banquet to be held in Louisville in October 2018. Cash prizes will be awarded for first, second, and third place winners in each category.

The American Printing House for the Blind, a 501(c)(3) nonprofit organization, is a worldwide leader in designing innovative lifelong learning solutions for children and adults who are blind or visually impaired. For more information, please visit www.aph.org •