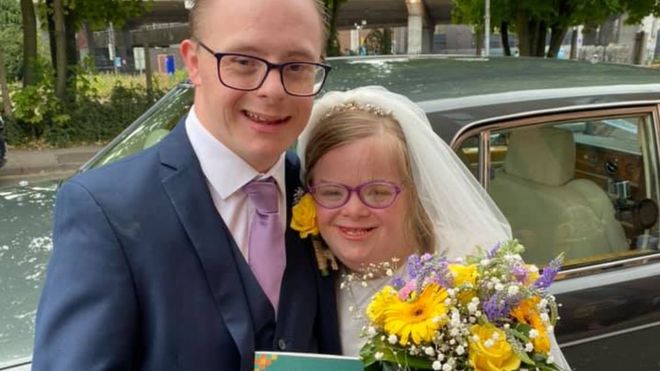 The 25-year-old was able to marry partner James Carter, 26, at Hillfields Church, Coventry, on their original date as restrictions were eased.

They had to cut their 220 guests to 30 and were not allowed to sing hymns, but said they had a “perfect” day.

“A big party” is planned for next year to celebrate with others, they said.

Before the wedding on Saturday, Heidi and James had not seen each other since March, with James at his family home in Weymouth while Heidi was in Coventry.

“It was really upsetting that we hadn’t seen each other,” Heidi said. “It was like being in prison.”

James has now relocated to Coventry, “to spend my life with Heidi” and the newlyweds are enjoying a “staycation honeymoon” in the city.

About 73,600 weddings and same-sex civil partnership ceremonies were postponed during the first three months of lockdown, according to the Office for National Statistics, and Saturday marked the first day that weddings of up to 30 people were able to take place in England.

Heidi said she felt “panicked” that their wedding may be cancelled, but the couple continued with planning.

On the day, new regulations meant the couple, who love to sing, had to make do without hymns, while a reception was swapped for a meal at a local pub.

They live-streamed the ceremony to overcome the limit on the number of guests, with more than 1,000 people joining them online.

“We are very popular,” Heidi joked.