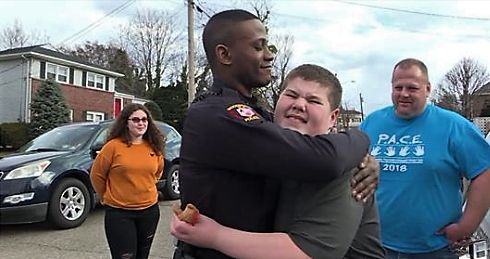 Although law enforcement is tasked with keeping the public safe, interactions between first responders and those with autism spectrum disorder (ASD) or other psychiatric conditions can be contentious—and in some cases, deadly.

A 2012 study conducted by researchers at Drexel University measured how common it was for youth with ASD to be stopped and questioned by police or arrested. They found that by age 21, 20 percent of youth with ASD had been stopped by police, and almost 5 percent had been arrested.

Although the Drexel study focused on those in the U.S., similar findings have been reported from other countries. For example, a study from Swedish researchers found that people on the autism spectrum were at a 31 percent higher risk of having a criminal conviction compared to those without ASD. More broadly, in a study of all civilian deaths during interactions with law enforcement in 2015, researchers found that individuals with a mental illness were over 7 times more likely to be killed by law enforcement compared to those without.

Why Are Encounters with Police Dangerous for Those with ASD?

When considering why encounters with police may be more dangerous for those with ASD compared to the general population, experts point to multiple factors. One factor is features of ASD can look similar to what individuals in law enforcement would consider “suspicious behavior” (e.g. lack of eye contact, reduced or repetitive speech, or repetitive motor movements).

Researchers and other organizations are increasingly recognizing the need for individuals with ASD and their families to learn specific strategies for how to interact with law enforcement. The National Autism Association has a free downloadable toolkit called, “Meet the Police,” which is designed for individuals with ASD and their caregivers. Similarly, researchers at Children’s Hospital Philadelphia presented initial findings in 2019 from a study using virtual reality to help adolescents and adults with ASD interact with the police.

Some families report taking an individualized approach. Gary Weitzen is the executive director of Parents of Autistic Children, a nonprofit based in New Jersey. Gary’s son Christopher has ASD, and he told the New York Times that when his son was young, he would always introduce Christopher to police officers to make sure Christopher felt comfortable and so that the officers knew him. Police in Gary’s neighborhood are familiar with Christopher and things that he likes to talk about. Gary’s nonprofit organization provides training for parents and teachers about how to help children with ASD to appropriately respond to people in uniform, as well as workshops and training for first responders.

Another reason why encounters with law enforcement can be dangerous for those on the spectrum is lack of autism-specific training. In 2008, New Jersey passed a statute requiring training for first responders in how to interact with those with disabilities. Unfortunately, a 2017 study of first responders in New Jersey found that 23 percent of first responders said their agency had not provided training in how to recognize and interact with individuals with ASD. Of respondents who did receive training, almost half (46 percent) felt that the training was either only “somewhat effective” or “not effective.”

Taken together, these results paint a troubling picture, as they suggest that even in a state which requires this type of training for first responders, 23 percent are not receiving this training at all, and almost half of those who do receive training do not experience it as being effective. Similarly troubling is that in the U.S. as of 2018, only 27 states and the district of Columbia have passed laws requiring that police be trained on how to respond to individuals with mental health, substance use, or other behavioral health conditions. Although It is encouraging that some states have passed such laws, it is highly problematic that the laws are not present in all 50 states.

How to Move Forward: A Two-Pronged Approach

Similarly, parents of children with ASD and other mental health conditions should freely receive information about how to help their children interact with the police. These types of policy changes will likely require both funds and time—but they are critical in order to save lives.