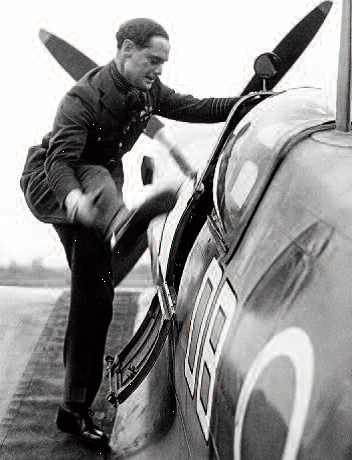 His most memorable maxim, “A disabled person who fights back is not disabled…but inspired,” became the driving force behind the creation in 1982 of The Douglas Bader Foundation.

It was a dark and stormy night. Oh crap, that’s already been used. In fact it was described by Writer’s Digest as “the literary poster child for bad story starters.” Alternatively the American Book Review ranked it as #22 on its “Best first lines from novels list.” Despite the fact that it was written by the English novelist Edward Bulwer-Lytton, to most people it was how Snoopy, (from the comic strip Peanuts), in his imagined persona as the World Famous Author, always began his novels.

How about, “it was a blustery Sunday morning”? Okay now we’re officially into this novelette. It was a blustery Sunday morning and I cranked over the Morgan. The Morgan is my cherished 1967 British Sports Car that I have owned for over 40 years. It’s very traditional, handmade in the same factory since 1910. We use the term “traditional” to mean primitive, Spartan and archaic. The steering wheel is on the right side (the proper side for an English roadster); the windshield folds down, the body frame is made out of wood and it sports a big leather strap to keep the bonnet (hood to us Americans) from popping up going down the road on its Conestoga wagonbased suspension. But it’s transformative. When you slide behind the wheel you are transported to Headquarters, Royal Air Force (RAF) Squadron 19 at Duxford Aerodrome near Cambridge. Last Sunday it was blustery and so it was de rigueur that I wore a scarf, adding to my Walter Mittyesque belief that I was behind the controls of a Spitfire in the Battle of Britain. My feeling, like a flying ace, was also an illusion shared by Snoopy as he sat atop his dog house looking for the Red Baron. The Morgan performed flawlessly and provided me with the sensory excursion that it has always furnished. The smell of the leather seats, the sound of the throaty exhaust, the feel of the obeche wood steering wheel and the slap of the wind against my goggles (you don’t think RAF pilots take to the skies without their leather goggles do you?). It was indeed a blustery Sunday morning and my Morgan…wait, did I say Morgan? I meant, my Vickers Supermarine Spitfire, with its elliptical wing and 2340 horsepower Rolls Royce V12 Merlin engine, performed flawlessly.

Ten minutes into my flight, a red traffic light brought me back to reality. The reality is that RAF pilots were the real deal; not “posers,” “also rans,” or “wanna bees.” They were, as Churchill said, “The best of Britain.”

One of “Britain’s best” was Douglas Bader. To be exact, Group Captain Sir Douglas Robert Steuart Bader, CBE, DSO & Bar, DFC & Bar, FRAeS, DL (yes he had more initials than the Chair of the Dept. of Medicine at Hopkins). He was a genuine flying ace, credited with 20 aerial victories, four shared victories, six probables, one shared probable and 11 enemy aircraft damaged. Undoubtedly, he was one of “Britain’s best.”

A true hero for sure, but where and when are we getting at in an article in the leading publication about disabilities? Bader didn’t have legs.

Bader joined the RAF in 1928 and was commissioned in 1930. In December 1931 he was performing stunts at an airshow and on a dare tried some taboo stunts he crashed and lost both his legs. In his log book he made the laconic entry, “Crashed slow – rolling near ground. Bad show.”

After a long convalescence, he was fitted with a new pair of artificial legs. With determined effort he was able to drive a car, play golf and even dance. Despite demonstrating that he could still fly, the RAF brass terminated his flying status and drummed him out of the service. They said their decision was based on the grounds that his situation was not covered by King’s Regulations. Bader took a job with Shell Oil Company. When the “hostilities” started to mount and it was evident that Britain was going to war against the German plan for world domination (and the invasion of England), Bader petitioned the RAF to be returned to his pilot status. The Air Ministry needed pilots and they  eventually returned him to full flying combat service. This proved to be one of the RAF’s best decisions.

Bader distinguished himself as an aggressive and courageous combat pilot in the Battle of France (Dunkirk) and in the Battle of Britain. According to the Douglas Bader Foundation, “It was thought that Bader’s success as a fighter pilot was partly because of his having no legs; pilots pulling high “gforces” in combat turns often “blacked out” as the flow of blood from the brain drained to other parts of the body, usually the legs. As Bader had no legs he could remain conscious longer, and thus had an advantage over more able-bodied opponents.”

On a run over German-occupied France, Bader’s plane was hit and he bailed out and was captured. Despite his disability Bader made a number of escape attempts and was eventually sent to the prisoner of war camp at the impenetrable Colditz Castle. He remained there until April 1945, when the camp was liberated by the First United States Army. When he bailed out, his right prosthetic leg became trapped in the plane and he was only able to escape when the leg’s leather straps snapped after he pulled the ripcord on his parachute. He was so respected by the German pilots that they made a special arrangement with the British to have a new prosthetic leg dropped by parachute over their base to be fitted to Bader. The arrangements were made by Churchill. After the leg was dropped by the British bomber, it proceeded to continue to bomb German power stations.

After the war, Bader became “an inspiration to disabled and able-bodied alike by demonstrating the ability to get on with your life. Post war found him working for Shell, getting his golf handicap down to an extraordinary two and fund raising on behalf of many disability groups and charities.” His most memorable maxim, “A disabled person who fights back is not disabled…but inspired,” became the driving force behind the creation in 1982 (following his death) of The Douglas Bader Foundation. The foundation was formed by family and friends, many of whom had flown side by side with Douglas during World War II.

When it comes to sheer courage, bravery and determination, I’m afraid the only thing Group Captain Bader and I share are the last four letters of our last names.•