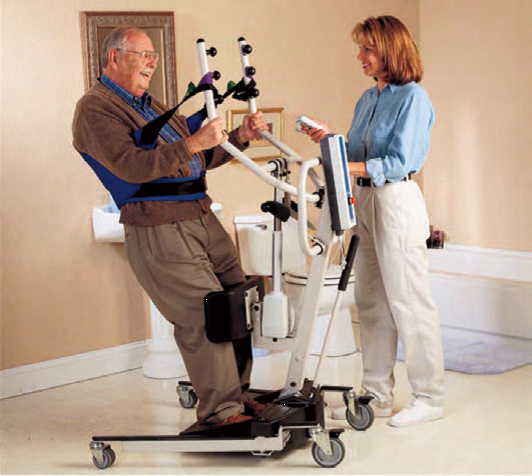 My GP diagnosed the problem as a pinched nerve, likely caused by use of the STS machine that had forced my spinal column and vertebrae into a position they had not been in in years.

The title of this column is taken from a line in Robert Burns’ 1786 poem “To a Mouse” that reads “The best laid schemes of mice and men often go awry.” Truer words were never spoken when describing my experience using the Sit-to-Stand (STS) machine featured in March’s non-Pulitzer-prize-winning column “My Physical Therapist and the ‘Iron Maiden.’”

As I explained in my March column, the STS machine uses hydraulics to allow a disabled individual who cannot walk to stand nearly upright. A strap-like sling is affixed to the user’s lower back and another sling is placed beneath the user’s buttocks. Eyelets at the end of both slings are then attached to one of three bolt-like appendages connected to each arm of the machine. The user’s feet are placed in specific areas on the bottom plate of the device, and his or her knees are placed in contoured plastic guards that face the user’s legs as he or she prepares to stand. The hydraulic motor then slowly lifts the user into an upright position, and the slings and knee guards work to force him or her to stand and support their full weight. As the user slowly stands, the eyelets on the ends of the slings are placed on other bolt-like appendages, forcing the user to stand more and more erect. Photos of the gizmo appear in last month’s column.

WHAT COULD GO WRONG?

I used the STS machine twice a week, sometimes more, for a couple of months, figuring it could be my salvation. Although uncomfortable to the point of being painful, it forced me to use muscles I hadn’t used for 25 years. I was also told the machine was good for my leg bone density, which surely must have suffered from sitting in a wheelchair for so many years.

USE OF STS RESULTS IN PINCHED NERVE

About two weeks ago, I awoke with a terrible pain in my left hand. Because of the pain, I couldn’t use the hand to grasp anything. At first I thought it might be caused by my MS which, in the past, had caused many different and sometime bizarre types of aches and pains in my body. But my neurologist said it didn’t sound like MS to him chiefly because the pain was intermittent and would dissipate after about 10 minutes, only to recur more intensely a few minutes later. The neurologist recommended I see my general practitioner.

My GP diagnosed the problem as a pinched nerve, likely caused by use of the STS machine that had forced my spinal column and vertebrae into a position they had not been in in years.

FUTURE USE OF THE STS MACHINE

The doctors tell me the effects of the pinched nerve can be eliminated through physical therapy. He also tells me that I shouldn’t abandon my use of the STS machine.•

LIVING WITH A DISABILITY
This column has a simple purpose, but a difficult goal: discuss issues that affect the lives, well being and state of mind of those who must live and cope with a disability and do so in a humorous way whenever possible. This isn’t an easy thing to do, since there’s certainly nothing funny or humorous about being disabled, or in the difficulties and obstacles that those with chronic disabilities  encounter daily. However, I’ve personally found that humor has to a great extent helped me cope with my disability (I’ve had Multiple Sclerosis for 45 years and use a wheelchair), and I hope this column helps others in the disability community do so as well.