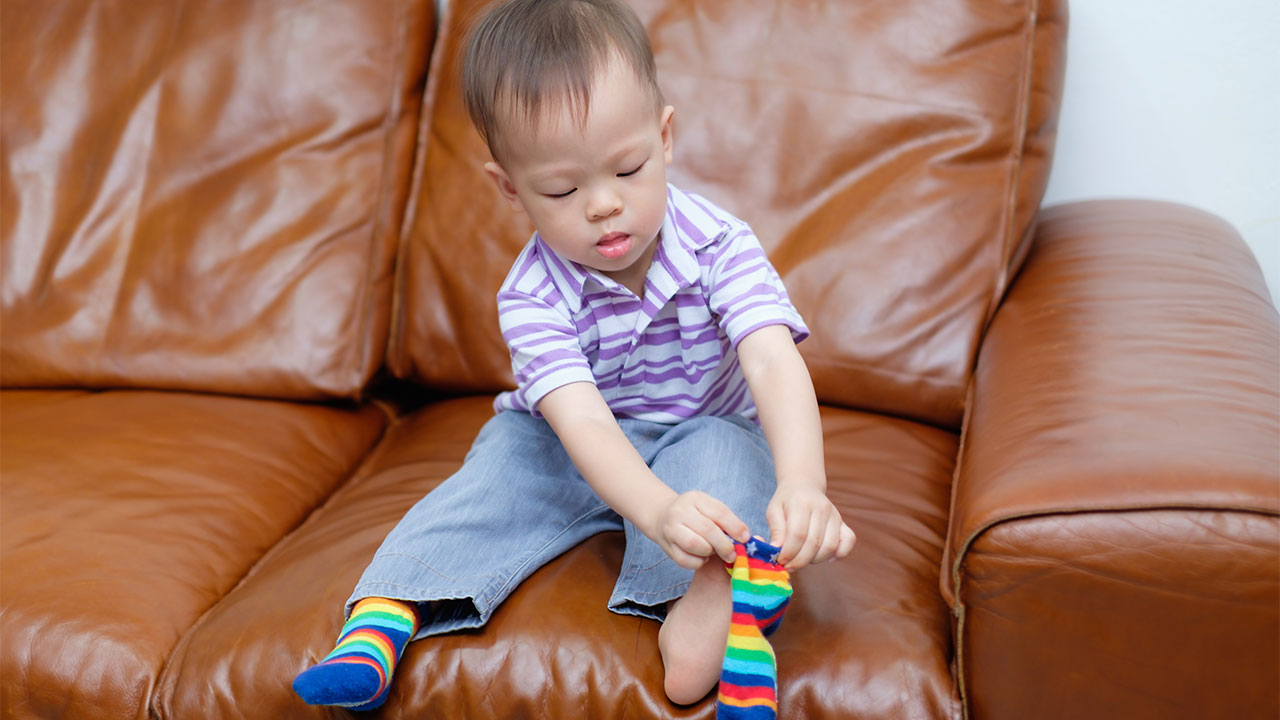 Approximately one in 700 babies is born with Down syndrome, making it the most common chromosomal condition in the United States. “People with Down syndrome have an extra copy of chromosome 21,” says Amy Houtrow, M.D., Ph.D., medical director of Children’s Hospital of Pittsburgh of UPMC’s Rehabilitation Institute and member of the American Academy of Pediatrics’ (AAP) Council on Children with Disabilities.

This additional genetic material disrupts typical mental and physical development, and it may also cause lifelong health complications. Keep reading to learn about common Down syndrome symptoms in babies and children.

Physical Signs of Down Syndrome

People with Down syndrome tend to have recognizable physical characteristics, while also looking like their own family members, says Emily Jean Davidson, M.D., clinical director of the Down syndrome program at Boston Children’s Hospital. Physical traits vary between individuals, but here are some common Down syndrome features.

Overall, you can expect your baby to reach the same milestones as their peers—rolling over, walking, and talking—but at a delayed pace due to the lack of muscle tone. That’s why it’s more important to pay attention to the sequence in which your baby reaches milestones (for instance, progressing from sitting unattended to crawling, standing, and then walking) and not their age at the time the milestone is reached.

Down syndrome affects kids’ ability to learn in different ways. Most children have mild to moderate intellectual impairment, and they tend to acquire new skills slowly, explains Kenneth Rosenbaum, M.D., founder of the division of genetics and metabolism and co-director of the Down Syndrome Clinic at Children’s National Medical Center in Washington, D.C. Speech and language skills may take longer than normal to form. Developmental delays could also cause impulsive behavior, a short attention span, stubbornness, and poor judgement.

Because the first years of life are so critical for a child’s future development, all babies born with Down syndrome are eligible for free early intervention services via the federally mandated Individuals with Disabilities Education Act (IDEA). These include physical therapy (to bolster motor skills and improve muscle tone); speech-language therapy (to heighten listening and speaking skills, as well as help with swallowing problems); and occupational therapy (to help children master life skills such as feeding and dressing oneself, opening doors, and holding crayons and pencils).

Dr. Rosenbaum adds that some children with Down syndrome enroll in special education classes—but others thrive in mainstream classrooms. Your child will keep learning throughout their life with proper support and education.

Down Syndrome Risks and Complications

Infants with Down syndrome are at risk for other health problems, which can add to the complexity of newborn care. Here are some common Down syndrome complications and what to do about them.

Heart Defects. Approximately 50 percent of infants with Down syndrome have a heart defect. Some heart conditions are identified prenatally during ultrasounds, and most of them can be corrected with surgery after birth.

Obstructive Sleep Apnea. Children with Down syndrome often have an enlarged tongue with poor muscle tone. When they sleep, the tongue may fall into the back of the throat. This can lead to obstructive sleep apnea, a condition that causes someone to stop breathing for very short periods of time. Nearly 45 percent of children with Down syndrome suffer from obstructive sleep apnea (enlarged tonsils and adenoids also are to blame). Sleep apnea isn’t typically a problem for infants, but watch for signs of it as your child grows; these include snoring, restless sleep, gasping noises, frequent night awakenings, and daytime drowsiness. Because of the high risk for apnea, the American Academy of Pediatrics (AAP) recommends that all children with Down syndrome have a baseline sleep study by age 4.

Hearing Loss. Your baby may have narrow ear canals and be prone to ear infections. To ensure that your baby’s hearing isn’t impaired, the AAP recommends hearing screenings every six months starting at birth and continuing to age 3 or 4 (after which testing should be done annually).

Vision Problems. More than half of people with Down syndrome have some type of eye problem. In infants, the problems can range from mild (blocked tear ducts) to serious (cataracts). Even children with no known vision problems should see a pediatric ophthalmologist every one to two years.

Malfunctioning Thyroid. The thyroid gland doesn’t function properly in about 10 percent of children with Down syndrome. Your baby will be screened for hypothyroidism at birth and at least every two years. If their thyroid is malfunctioning, medication can help.

People with Down syndrome are also more prone to immune disorders, infections, dementia, leukemia, obesity, and blood conditions, among other things.

Although these health issues sound scary, all are treatable. A baby born now with Down syndrome can expect to lead a full and healthy life. In fact, the life expectancy for people with Down syndrome has increased dramatically in recent decades: from 25 years in 1983 to 60 years today.