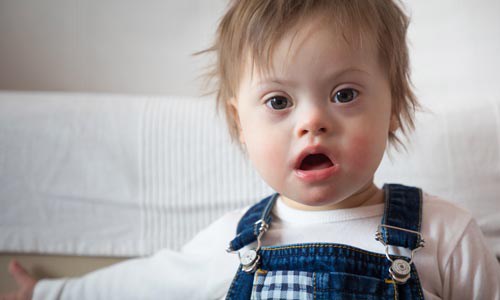 You’ve most likely met people with Down syndrome, but you might not know much about the chromosomal condition that affects one in 700 individuals. In honor of Down Syndrome Awareness Month, which takes place every October, we’ve rounded up some Down syndrome facts that every parent should know. Keep reading to learn more about the causes, risk factors, symptoms, treatment options, and more.

Down syndrome is named after John Langdon Down.

The British physician first described Down syndrome in 1866, but he didn’t know what caused the telltale symptoms. Indeed, experts didn’t understand the chromosomal basis until French physician Jérôme Lejeune discovered it in 1959.

Down syndrome is caused by an extra chromosome.

Most babies are born with 46 chromosomes in every cell—23 from the mother and 23 from the father. Babies with Down syndrome have an extra copy of chromosome 21, which causes distinct physical and intellectual symptoms, says Amy Houtrow, M.D., Ph.D., medical director of Children’s Hospital of Pittsburgh of UPMC’s Rehabilitation Institute and member of the American Academy of Pediatrics’ (AAP) Council on Children with Disabilities.

Experts are still trying to figure out why some babies inherit an extra copy of chromosome 21 and others don’t. Genetics possibly plays a role in less than 1 percent of Down syndrome cases, according to the National Down Syndrome Society. A baby’s chances also seem to increase with advanced maternal age, but the link isn’t fully understood, adds Kenneth Rosenbaum, M.D., founder of the division of genetics and metabolism and co-director of the Down Syndrome Clinic at Children’s National Medical Center in Washington, D.C. Down syndrome tends to happen unpredictably, and there’s nothing parents can do to prevent it.

Down syndrome is the most common chromosomal condition.

There are three types of Down syndrome.

While each individual with Down syndrome displays different symptoms, certain physical characteristics are common. They include flattened face; short stature; slanted almond-shaped eyes; low muscle tone; a crease across the palm of the hand; small hands and feet; tiny ears; short neck; white spots on the irises of the eye; protruding tongue; and small pinky fingers that might curve.

The intellectual symptoms of Down syndrome vary greatly.

Down syndrome often causes learning disabilities, speech and language delays, and other intellectual symptoms—but the severity differs for everyone. Some children with Down syndrome enroll in special education classes, while others perform well in mainstream classrooms, explains Dr. Rosenbaum. Most people have mild to moderate intellectual impairments.

Down syndrome is associated with certain health complications.

People with Down syndrome have a greater risk of certain health conditions. One of the most common is congenital heart defects; they affect about half of children with Down syndrome, but they can often be corrected through surgery. Other common complications include obstructive sleep apnea, vision impairment, hearing loss, immune disorders, gastrointestinal problems, and thyroid problems.

Down syndrome can be diagnosed before birth.

First and second trimester screenings, which usually involve a blood test and an ultrasound, give a probability that your child will have Down syndrome—but they aren’t completely accurate. Prenatal diagnostic tests like chorionic villus sampling (CVS) and amniocentesis can predict Down syndrome with greater precision. The downside, though, is that diagnostic tests come with a slight risk of miscarriage.

There isn’t a treatment for Down syndrome.

Down syndrome is a lifelong condition that can’t be treated. But your child can live a fulfilling life with proper assistance, whether it’s in the form of speciality doctors, early intervention services, occupational therapy, speech therapy, physical therapy, or special needs classes.

Life expectancy is on the rise.

According to Dr. Rosenbaum, Down syndrome previously had a 10 percent mortality rate in the baby’s first year. But thanks to medical advancements and a better understanding of the condition, many people with Down syndrome can expect to live at least 60 years nowadays.

October is Down Syndrome Awareness Month.

This observation celebrates Down syndrome and raises awareness for the genetic disorder. To learn about ways to advocate, visit the information center on the National Down Syndrome Society website.