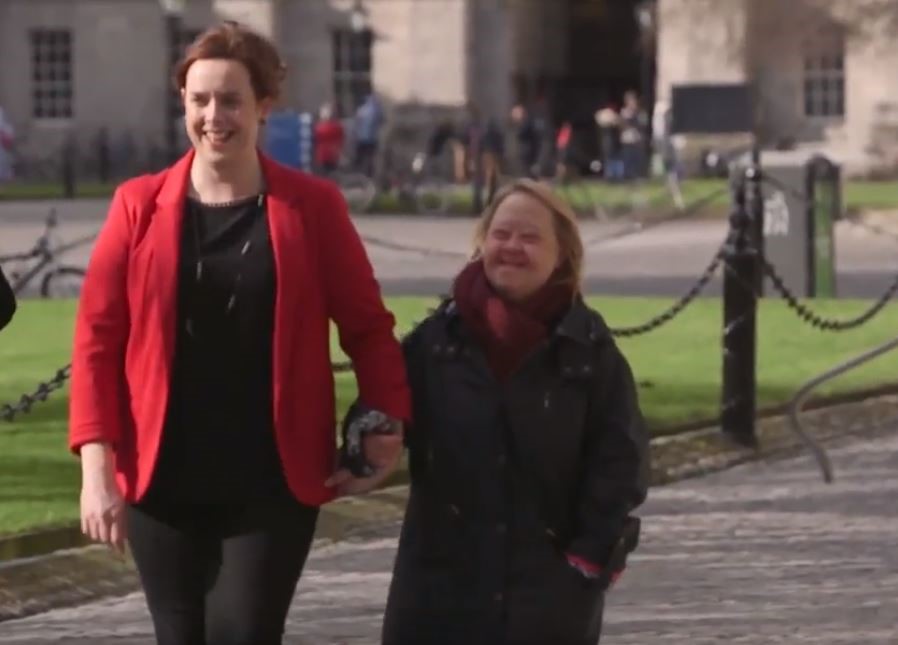 Weeks into France’s strict coronavirus lockdown, Mohammed, a 14-year-old with autism, took a pickax and started hitting the wall of his family’s house.

His explanation: “Too long at home, too hard to wait.”

The disruptions in daily life caused by the virus pandemic are a particularly trying ordeal for children with disabilities and the people who love and are caring for them confined at home while special-needs schools and support programs remain closed.

Mohammed hasn’t picked up the ax again since the incident last month, his father, Salah, says with relief. But the boy still gets frustrated being stuck inside and says, “I want to break the house down.”

The family, like others who spoke to The Associated Press about what their experiences, spoke on the condition of being identified by first name only out of concern for the privacy of their children.

Making matters worse, Mohammed’s mother, who works in a nursing home, has been on sick leave after testing positive for COVID-19. She had to live for weeks isolated on the top floor of their house in the Paris suburb of Mantes-la-Jolie. Her health has since improved.

The physical distance from her family was particularly hard for Mohammed, who has a close relationship with his mother.

“We kept telling him that there’s the disease. He took note. Then he tried again to go up and see her,” Salah said.

Violent outbursts, incomprehension, disputes, panic attacks: Life under lockdown has been a shock to many children with special needs who suddenly lost their reassuring routines, cut off from friends and teachers. And France’s virus lockdown measures — now in their second month and set to run until at least May 11 — are among Europe’s strictest.

At home, Mohammed requires constant attention so he won’t injure or endanger himself.

“That’s tough on him. We reprimand him, saying no. … We need to repeat and repeat,” Salah said. The father admits to his own fatigue, working at home as a telecoms engineer while caring for Mohammed and his two brothers, ages 12 and 8.

Salah knows how to detect signs on Mohammed’s face when he is under too much pressure and may get angry: “I don’t let things get heated.”

Mohammed normally attends the Bel-Air Institute near Versailles, which provides specialized educational and therapeutic services for dozens of children with different types of disabilities. His teacher. Corentin Sainte Fare Garnot, is doing his best to help.

“If you remove crutches from someone who needs them from one day to the next, it gets very complicated,” he said.

“The feeling of loneliness and lack of activity can be very deep” for people with autism, the teacher said. Mohammed calls him several times a day.

Aurelie Collet, a manager at the Bel-Air Institute, said some teenagers at first didn’t understand the lockdown rules keeping them stuck at home and kept going out. Others who had been well-integrated in their classes turned inward, isolating themselves in their bedrooms.

The staff developed creative tools to keep communicating and working with the children, including through social networks, she said.

Thomas, 17, and Pierre, 14, brothers with intellectual disabilities who also go to the Bel-Air, are similarly destabilized by lockdown restrictions.

“I feel worried about how long the lockdown will last, what’s going to happen next”, Thomas said. The teenager has lots of questions about “how many people will get the virus, when the epidemic will stop?”

Another big concern for Thomas is his future; an internship he planned to do this summer is likely to be postponed.

At first, their parents recalled, the boys acted as if they were on vacation, playing all day and calling their friends. The parents organized activities to give Pierre and Thomas more structure amid the public health crisis.

Pierre especially misses the gardening he used to do at the Bel-Air, so he planted seeds in pots to grow radishes.

Under nationwide restrictions, the French can only leave home for essential services, like buying food or going to the doctor, and must stay close to home. Physical activity in public is strictly limited to one hour and within a nearby radius. Police routinely fine violators.

Recognizing the burden the regulations place on people with autism, French President Emmanuel Macron announced announced an exception that allows them to go out to customary places without having to observe time or distance limits.

The new challenges the pandemic presents to children with special needs are familiar to millions of families around the world. Across the U.S., teachers are exploring new ways to deliver customized lessons from afar, and parents of children with disabilities are not only home-schooling but also adding therapy, hands-on lessons and behavioral management to their responsibilities.

Salah has started taking Mohammed out again for bike riding, an activity his eldest son enjoyed before the pandemic.

“This is like a safety valve to him. He needs it. … We’re having a hard time following him, he’s going ahead, happily shouting,” Salah said with a smile in his voice.

Sainte Fare Garnot is helping the family to find concrete solutions. Because playing soccer with his brothers in the garden has proven difficult for Mohammed because the rules of team games are too complex for him, he suggested that the three boys instead take shots at goal in turn.

France is still playing catch-up with some developing-country peers in terms of educational opportunities for children with autism spectrum disorders, and teachers fear that some will also have to spend months relearning skills they may have lost during the lockdown period.

The president has announced that schools will be “progressively” reopened starting from May 11, but authorities have not provided details yet about special-needs children. France counts more than 350,000 school students with disabilities, including 70,000 in the special education system that includes the Bel-Air.

The uncertainty is specially hard for young people like Mohammed. “I know he will ask me again,” his teacher said. “‘When is it ending?’”