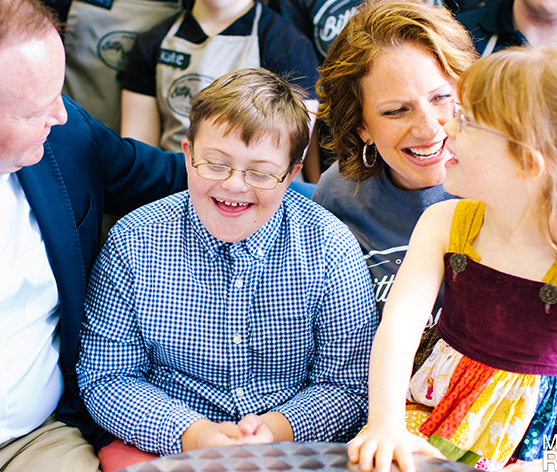 Amy Wright started a coffee shop to employ people with intellectual and developmental disabilities – and joined a human rights movement.

Who She Is Like every parent, Amy Wright dreamed about her children’s futures – the sports they’d play,  the colleges they’d attend, the careers they’d have. Then Beau, her third child, was born with Down syndrome, a congenital chromosomal condition that results in cognitive delays and an increased risk of certain medical conditions. And when she learned her fourth, Bitty, would also have Down syndrome, she began researching what their futures might look like. What she found was disheartening. Over 80% of adults with intellectual and developmental disabilities (IDD) were unemployed.

What She Did Determined to change that statistic, in January 2016, Wright opened Beau’s Coffee in Wilmington, North Carolina, and hired 19 people with IDD. “A coffee shop seemed like the perfect way to bring people together,” she says. That original spot was just 500 square feet. By the end of its first month in business, the shop was so popular that lines wrapped around the building. Six months later, Wright expanded it to 5,000 square foot location, renaming it Bittty & Beau’s Coffee. (It was Beau’s request to honor his little sister by adding her name to the shop.) Now, with additional cafes in Charleston, South Carolina; Savannah, Georgia; and one opening soon in Annapolis, Maryland. Wright employs more than 120 people with IDD.

Why it’s cool “People come from all over the world to our coffee shop in Wilmington,” Wright says. “We started out thinking, ‘Let’s create 20 jobs in our community,’ but we learned we had been trusted with a bigger job: if we could change the way employers thought about people with disabilities, then we could affect business culture everywhere. We are part of a human rights movement.” The Wrights have also shown senators and the secretary of labor around their Wilmington location as part of their advocacy work to end laws that allow employers to offer people with IDD lower wages. Employee Jesse Guillaume, who has cerebral palsy, says it best: “When someone walks into Bitty & Beau’s and takes the time to talk to my co-workers and me, they learn over a cup of coffee.”