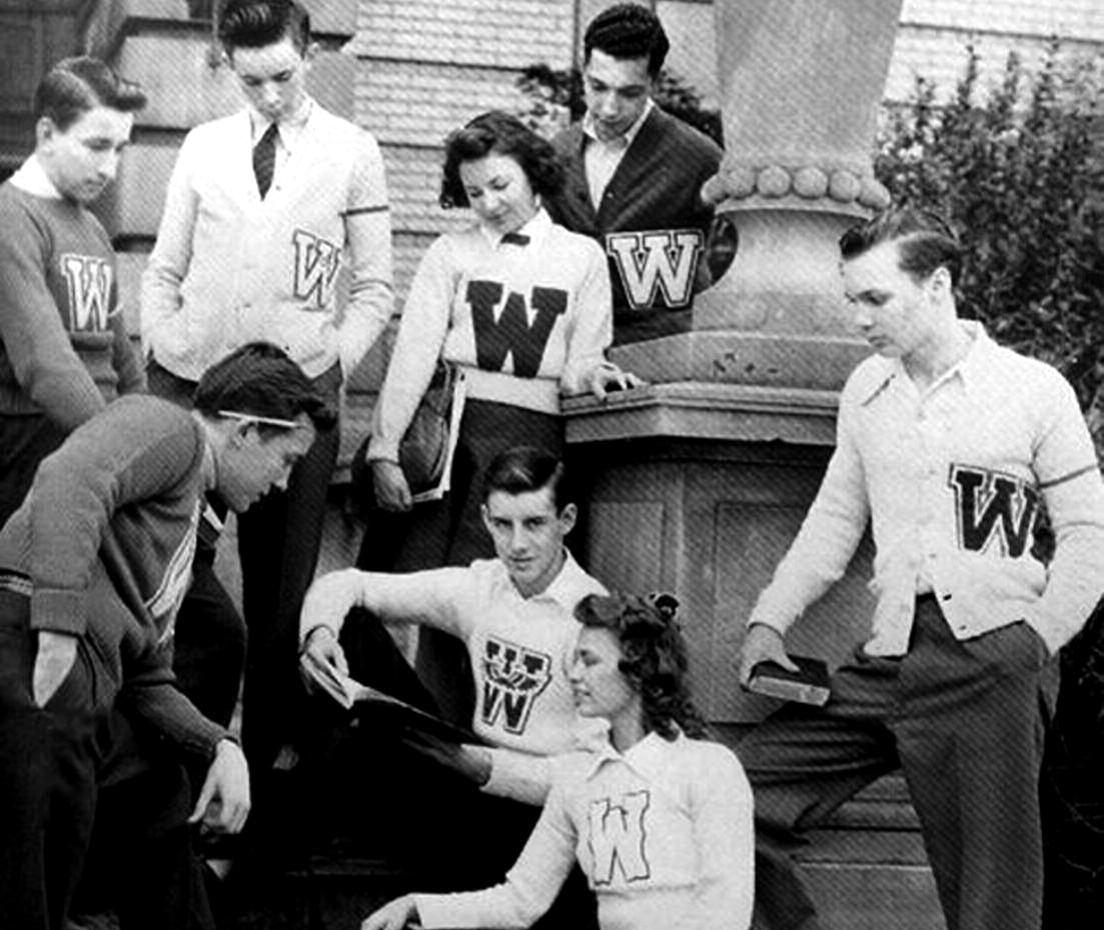 Maybe we should revisit the significance of the iconic BMOC (Big Man on Campus) and decide that it should really mean, “Be Mindful Of Compassion.”

The images are forever emblazoned in my memory. BMOC (Big Man on Campus). Lettermen. Varsity athletes.
They were tall or just appeared tall; taller than the rest of us for sure. Taller, bigger, recognized, popular, admired, envied, privileged and babe magnets. They were the members of the varsity athletic teams who earned their “letter jackets” and “letter sweaters.” Like magic capes these jackets bestowed a curtain of invincibility to those who wore them. The jackets were made of bright colors with contrasting metal buttons and leather sleeves and had the upper case “T” on one side (for Tilden High School) and a chenille football, basketball, baseball or winged foot on the other.
On the sleeve was the player’s jersey number and their name in script with the years they earned their “letter.” There
were also letter “sweaters” and the jocks allowed their girlfriends to wear them as a sign that signified “back off” for
the rest of us. The message was both appreciated and respected. And worked in a way that the current garden signs announcing “Protected by ADT” could only wish were as effective.

You had to earn them. They were unobtainable unless you qualified to wear one. You had to play in X amount of games or, in other cases, play for a pre-determined amount of time in a season. Looking back there was a seemingly progressive group that capitalized on the aura of the “letter sweater” mystique outside of the realm of running, jumping, swinging and scoring. The “Longfellows” wore sweaters with a larger uppercase “L”. You had to have participated in several community and civic events and demonstrated that you were a good student-citizen. “Longfellow” members had to be at least 5’10” in height which, back in the early 1960’s, was considered “longish” (or “tallish”). But there was a pecking order… the “Longfellows” moved out of the way for those who wore the “T” jackets. Jocks have historically outranked the “good student-citizens.”

Apparently they still do. Recently, Michael Kelley was prohibited from wearing his “letter jacket.” Michael is a basketball player at Wichita East High in Wichita, Kansas. Michael is also an athlete with Down syndrome and
autism (guess we can call him a double threat player). Michael plays in the school’s special needs basketball league. More accurately, Michael plays his heart out on the school’s special needs basketball league.

Michael’s mom Jolina Kelley describes her adopted son as a one of a kind boy who loves everything about basketball. She wanted to help announce his participation, his commitment and his accomplishments, and had a “letter jacket” custom-made as a celebratory gift. The school did not officially recognize their special needs athletes as being worthy of earning a “letter,” not even “lower case letters.”

Michael wore it with pride and dignity and was high-fived by every other “letterman” on the campus.

Apparently a “parent” complained and, in the spirit of “zero tolerance,” Michael was instructed to remove his jacket. Wichita East High School Principal Ken Thiessen explained that, “Teachers told the parents they would prefer he not wear the letter on his jacket.” When asked if the school would consider giving a varsity letter to special needs students, he replied, “We have considered it, and our decision was no. We decided that is not appropriate in our situation because it is not a varsity level competition.” Perhaps it would have been more appropriate if the school left that decision up to the Wichita East High School lettermen.

Michael’s mother remarked, “It’s not just my son. It’s every student that was out there last night. It’s every student that’s there on Fridays that plays their hardest and to the best of their capability regardless what that is.” The notion of providing athletes with special needs with special awards, special moments and special experiences is not new. Exceptional Parent magazine has covered orchestrated touchdowns, error-generated home runs and homecoming
king and queen coronations before, and the response has not universally been supported by everyone. There is certainly the argument to be made that sports, achievements and winning is immutable and is tarnished by “feel good” moments.

Guess we have to retrieve all the “wings” given to five year olds by flight attendants and pilots, police badges given out on “Sheriff For A Day” Programs, junior Marine Corps corporal stripes and the uniforms worn by “bat boys” and “bat girls” at baseball parks from the minors to the majors.

Maybe we should revisit the significance of the iconic BMOC and decide that it should really mean, “Be Mindful Of
Compassion.”•