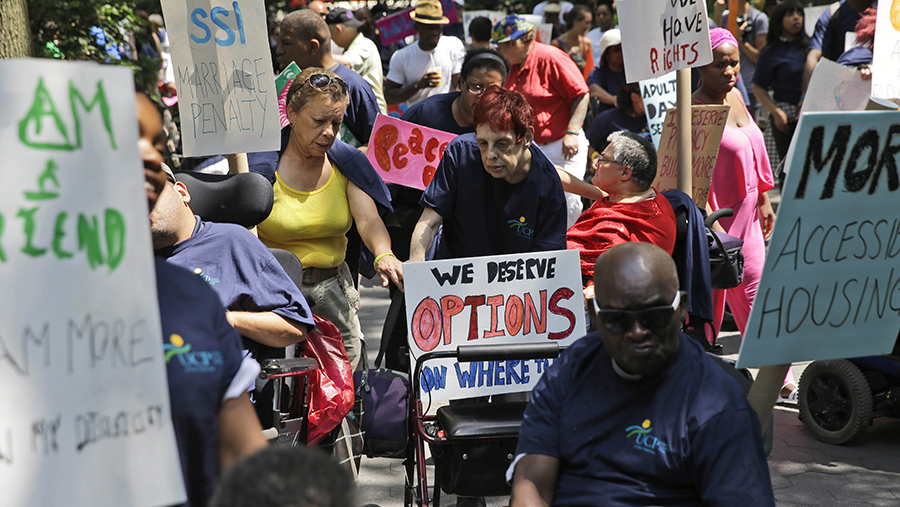 Michael Bethke, 19, works part time at a grocery store in Clark, S.D. He started out as an intern through the state’s Project Skills program for high school students with disabilities, and now performs tasks like unloading vans. “I like it a lot,” he says of his job.

It’s been 25 years since the Americans With Disabilities Act prohibited employment discrimination against people with disabilities. Yet as the nation celebrates the law’s anniversary, a stark divide remains: men and women like Bethke are still less likely to have jobs than people who don’t have a disability.

About a third of the more than 20 million working-age Americans who have a sensory, mental or physical disability are employed, according to an analysis of 2013 U.S. Census data by the Institute on Disability at the University of New Hampshire. At the same time, other surveys show people with disabilities want to work.

Policymakers want to boost those employment statistics, reflecting a growing view that people with disabilities belong in competitive, integrated workplaces. For example, the Workforce Innovation and Opportunity Act, which authorizes federal jobs programs, emphasizes helping youth with disabilities find work in their communities rather than in sheltered workshops.

Thirty-two states have passed laws or taken executive action over the past decade that make employment the preferred outcome of services for people with disabilities, according to a 2014 University of Minnesota report. Fourteen more states, including South Dakota, are taking less formal steps to adopt an “employment first” approach.
“Employers are saying our most pressing problem in terms of ability to grow and expand our business is workforce,” said South Dakota Gov. Dennis Daugaard. “I want to make sure they see that an opportunity for them is employment of citizens with disabilities. That may be a pool that they’re not presently considering, that they should consider.”
For Daugaard, a Republican, this is personal. His parents were born deaf, and he witnessed their effort to be employed despite the difficulties they sometimes faced. Daugaard’s public commitment to South Dakota’s employment initiative included a recent awards ceremony that recognized the Clark School District’s Project Skills program.

Yet to really raise the employment rate for people with disabilities, experts on disability and employment say, states have to look beyond targeted programs and foster economic growth, coordinate social services and work with the federal agencies to make sure that Social Security and Medicaid benefits don’t discourage recipients from working.

Pushing Employment First
The term “people with disabilities” encompasses people with all types of mental and physical disabilities, from those born with Down syndrome to those paralyzed by car accidents to those who experience panic attacks so severe they can’t perform everyday activities. Bethke has a cognitive disability, according to his former special education teacher, Susan Schmit.

Many people caught under this demographic umbrella don’t have any trouble finding work. But some need extra support.

Advocacy groups, people with disabilities and policymakers have been pushing to reorient publicly funded services toward employment for decades, said John Butterworth of the Institute for Community Inclusion at the University of Massachusetts, Boston.

“The current focus on employment really came from states,” Butterworth said, although the federal government and advocates have also played a role.

Adopting an employment first approach could save states money. It’s more cost-effective in the long term to support people as they work — even if they only work a few hours a week — than to pay for ongoing care services during the day, Butterworth said.

That’s not Daugaard’s primary motivation, however. “The prime motivation is recognizing that work provides the worker with a great sense of self-sufficiency and achievement,” he said. He also said the approach helps the employers as well as the employees.

Bethke, for instance, wants to keep working at the grocery store long term. That commitment makes him a valuable employee in the retail sector, which has a high turnover rate. One of the dividends of working, he said, is living in his own apartment. He’s still participating in the Project Skills program through another part-time internship, one in which he calls Bingo numbers at the town’s assisted living center.

Economic Conditions Matter
Yet, South Dakota’s internships and marketing initiatives don’t really explain why the state has a high rate of employing people with disabilities.

Economic conditions do. The labor market is so tight that just 3.8 percent of people are out of work. “Right now, because unemployment is so low in South Dakota, we don’t have very many people with disabilities coming to our vocational rehabilitation offices,” said Gloria Pearson, secretary of the South Dakota Department of Human Services. Offices are focusing on outreach instead, she said.

Poverty rates also help explain the variation. In regions that struggle with poverty, such as the Mississippi Delta and Appalachia, disability is more common and people with disabilities are less likely to work.

“A large portion of the issues facing people with disabilities are ones not just of employment, but of poverty as well,” Houtenville said.

Publicly funded services geared toward employment don’t address all the barriers people with disabilities might face, said Elizabeth Jennings, director of training and technical assistance for the nonprofit National Disability Institute. And disability services may not coordinate with other services a consumer might need, such as housing assistance.
States with small populations, such as South Dakota, seem to do a better job connecting people with disabilities to jobs. This may be because small states can provide more holistic services.

“One big issue that disability policy at the state and federal level faces is that it’s very fragmented,” Houtenville said. Different agencies deliver medical, education and employment services. In a large state, it can be hard to get agencies to work together. In a small state, the people who need to collaborate may work in the same building.

South Dakota’s Department of Human Services manages four divisions: vocational rehabilitation, services for the visually impaired and two divisions that serve people with developmental disabilities. It’s easy for the divisions to work together and with their regional offices, Pearson said, because everyone knows one another.

Changing Benefit Programs
The federal government has added more work incentives to major benefit programs over time. But the two largest programs — Supplemental Security Income and Social Security Disability Insurance — are still structured to support people who cannot work. Once recipients start earning a certain amount of money, they risk losing their benefits.
“A state program, such as an employment-related program, is going to struggle mightily against that (federal) program that is paying people not to work,” Houtenville said.

A recent study from the American Institutes for Research found that the top occupations for people with disabilities are low-wage jobs that may not provide health care or retirement benefits: positions like janitors, cashiers, laborers and maids. The study’s authors suggest that the quality of the jobs available may dissuade people from looking for work after they start receiving Social Security benefits.

States are trying to find ways to allow workers with disabilities to earn more but keep their Medicaid health care coverage. For example, South Dakota has a waiver from the federal Centers for Medicaid and Medicare Services that provides people with intellectual and developmental disabilities with home and community-based services, including help navigating employment. Beneficiaries used to have to hand over any money they earned above $400 per month to cover the cost of the services.

Under Daugaard, South Dakota eliminated the waiver’s cost-share agreement so that workers could earn and keep more money. The state’s Department of Human Services is also trying to better educate beneficiaries with disabilities about work-incentive programs.

It’s not clear whether employment first strategies are making a difference, Butterworth said. It takes time for policy changes to show up in employment data, and states are also changing what they measure. “One of the outcomes of the current surge in focus on employment is states are getting more strict about what they count as employment,” he said.

The best strategy for raising employment rates for people with disabilities, Houtenville said, is delivering great education and anti-poverty programs that benefit everyone.

“There’s a concept in disability technology called universal design: something that’s good for everyone is going to be good for disabilities,” he said. Curb cuts in sidewalks, for instance, help moms pushing strollers and people delivering the mail as well as people who use wheelchairs. Internship programs help all teens learn to conduct themselves at work, including young men like Bethke.

Stateline is a nonpartisan, nonprofit news service of the Pew Charitable Trusts that provides daily reporting and analysis on trends in state policy.