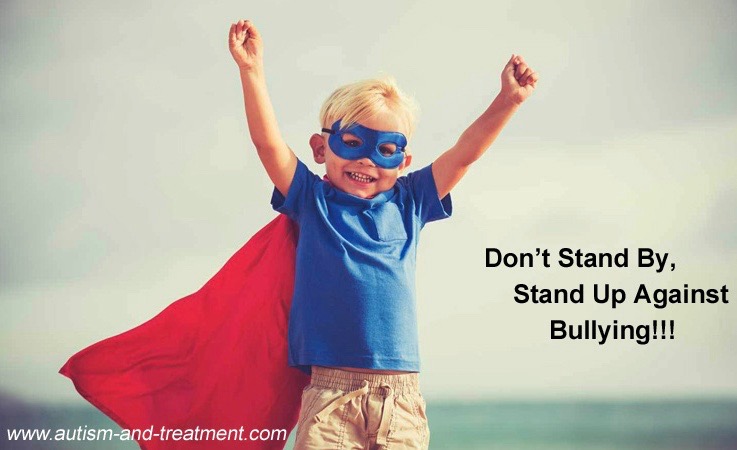 How many of us still remember bullying incidents that occurred when we were in school? These incidents probably only happened once or twice in our lives, but the pain and those incidents are still etched in our minds as though they happened yesterday. We put the bullying behind us, and may be stronger as a result. But what if the bullying occurred on a weekly basis or even daily? Would it be as easy to overcome?

Bullying can happen at any school. But middle school is often the worst time for our children with autism. Those years are awful for many kids, but for children who are socially and behaviorally different, it can unbearable and physically dangerous. My son was painfully aware that he was different from the other kids and not accepted. Ryan became an easy target for bullies. And since he was lacking in the social skills area, he didn’t have many friends to protect him.

Ryan still carries the scars of what happened during those painful middle school years. I never realized the magnitude of the bullying problem, because Ryan never shared what happened during his day. When he came home, I gave him a hug and asked how school went. The answer was always the same, “School was fine.”

I should have recognized the signs. Every morning when it was time to get ready, the panic started and my son didn’t want to go. Ryan dragged his feet. It took forever to get him out the door. As we got closer and closer to school, he got weirder and weirder. Some days he refused to get out of the car.

I should have realized this apprehension was not part of his autism or his fear of new situations. But, when were late, yet again, I grew tired of his antics. And when I ran out of patience, I just yelled at him to get out of the car. I should have realized that something was terribly wrong, but by that time I just wanted him anywhere away from me. I still carry the guilt from those incidents.

The bully’s “power” to intimidate is usually not challenged, because the other children witnessing it are afraid. No one speaks up, because they do not want to be the bully’s next victim. Bullies infect the social environment and hurts the academic achievement of all children. Their power is that the other kids think “I’m glad that’s not me” or “If I interfere, I might be next.” But, this silence gives bullies the green light to keep going. Bullying must never be tolerated. It leaves permanent scars on the victim, the witnesses, and even the bully. Too often schools and parents accept it as an inevitable part of childhood. They couldn’t be more wrong!

Imagine a school where kids are not afraid in the bathrooms or hallways.  Imagine a place where bullying stops because the children themselves will not allow it. Bullying usually happens below the teacher and staff radar. Even if a school has an excellent principal and caring teachers, the bullying continues, since it is impossible to monitor every corner of the playground, lunchroom, hallways and bathrooms.

The key to end the bully problems is the children themselves. Each school must educate their students on what bullying looks like and how to take positive steps to stop it. The kids can stop the problem if taught what to do. They need to learn bullies are powerless when other students decide they had enough and no longer remain silent. At Ryan’s school, there were no anti-bullying programs to teach kids how to defuse these power brokers and not tolerate the bullies. Those programs should be mandatory at all schools. That is the only way to truly stop the bullies who prey on vulnerable children.

And at home we must do our part and teach our values. We need to start the conversation and talk to our kids about bullying and standing up for others. Has your child been a victim, or witnessed someone else being bullied? The targets of bullies need to know: Bullying Is Not Their Fault. Witnesses need to know that they should Stand Up for Kids Who Are Bullied. And bullies need to know they No Longer Have the Power at our schools!

Marcia Hinds wrote I KNOW YOU’RE IN THERE-Winning Our War Against Autism.

When her son was first diagnosed with autism, the “experts” said Ryan would need to be institutionalized. He is now an aerospace engineer. Ryan’s inspirational story is told in a way that is heartwarming, heartbreaking, and sometimes hilarious. Marcia has a degrees in Psychology/Sociology from UCLA and a teaching credential. But Marcia’s most impressive credential is that she is Ryan’s mom and their family beat autism. You can contact Marcia through her website www.autism-and-treatment.com All profits from all she does goes to the AutismOne nonprofit. Currently, she working with Dr. Sue Swedo (NIMH/PANDAS) and a team of professionals to develop treatment centers at our teaching hospitals.