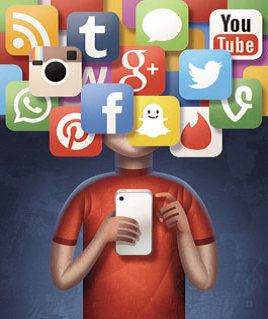 What school would want to admit a student who routinely posts offensive remarks on their Facebook page?

“But coach, that’s how we do things now,” said one of our athletes to me just a few weeks ago. I was speaking to our teams during my annual talk before the fall season. The young lady was responding to my plea for the use of common sense when going on the Internet. Despite all of the things that have turned out to be disasters on the web, some students still insist on running the risk of getting themselves in hot water over its misuse. Unfortunately, the consequences of misusing the Internet may be far reaching that just in the present. Once something is out there…it is there forever. As parents, we should make every attempt to educate our children on the Internet, social media—on what’s proper and what doesn’t belong on a text, Twitter,
Facebook or any other outlet. It pays to be aware and be smart at all times.

That Facebook photo of your child at a party, or that comment that he or she thought was so clever when she posted it on YouTube could stop your son or daughter from being recruited, or even gaining admission to the college of his or her choice. College admission officers and college coaches are watching. While it’s not the sole reason for denying admission, what your child may think is harmless might be just the thing to keep them out of their school of choice. What school would want to admit a student who routinely posts offensive remarks on their Facebook page?

How about your child’s email address? Let’s say a college coach wants to email your child and sees their email address and it is a little risqué or in poor taste. Do you think it may have some effect on that coach reaching out to your son or daughter? Coaches nowadays are using the web more and more to scout, recruit and contact potential athletes. The more aware you and your child are of this, the better your opportunity to present a clear picture of who your child really is to that coach or college. Your child using his or her team uniform number with their name, i.e.,
Smithj23@whatever.com, is a better email address than one that depicts something not as flattering.

Photos on the Internet should always be appropriate as well. Comments on Twitter,
Facebook, and in any text or email, should positive. Photos depicting underage activities that do not reflect positively on your child should never be posted. Coaches have enough to worry about without having to be concerned about their athletes doing the wrong things when away from practices or games. Visibility is a good thing, but that visibility should be in good taste.
From middle school to college, student athletes are making comments via social media. Despite requests from parents, coaches, teachers and administrators, these continue. Verbal challenges,
Internet bullying and intimidation can really backfire and be embarrassing to the student, the family and the school. In some cases, it could be criminal. While the intent may have been to poke fun, the simple fact is that if the comment was not out there for all to read, or the picture was not posted for all to see, there would not be a problem. A good rule of thumb for your child is to tell them, “Make believe your coach or I am standing right over your shoulder as you are ready to send that text, Twitter message, email, or photo… If you wouldn’t do it with us standing
there, it’s best not to send it at all.”

This world we live in is connected via social media, and while we used to think it’s just kids playing sports, the truth is that those days are gone. For student athletes in this modern world, it is best to always err on the safe side – and as parents, coaches and teachers, we must continue to remind, educate and convince our kids and yes, even ourselves, of that principle. In this day and age, the old adage of “Silence is Golden” is truer than ever.•

Social Media: Helping Your Child Do the Right Thing

FROM THE COACH’S CORNER TOM CURRY
What school would want to admit a student who routinely posts offensive remarks on their Facebook page?