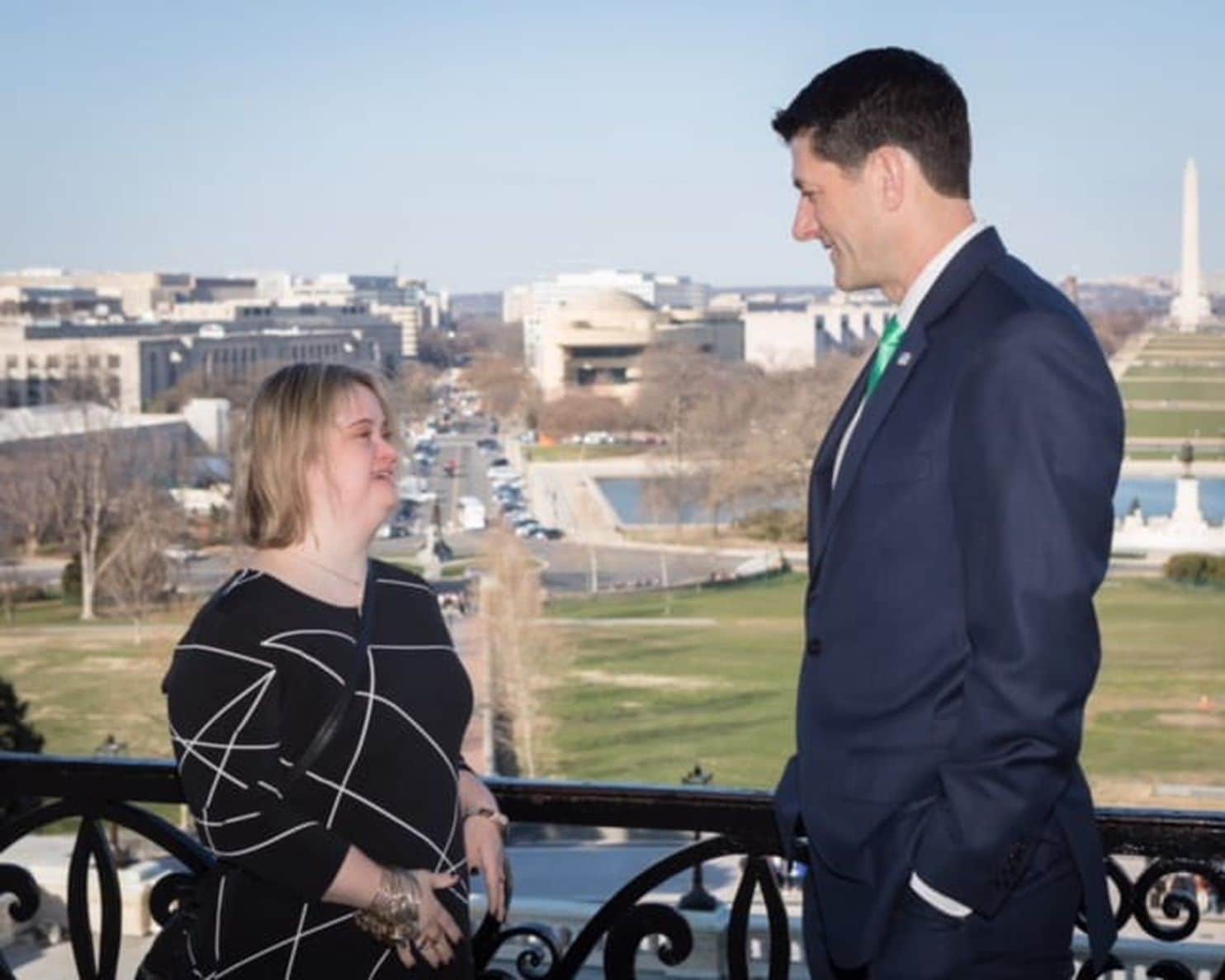 There are thousands of lobbyists in Washington, legions of well-connected pros who are hired by special interest groups to vigorously advocate for issues.

Perhaps nobody in those ranks is more committed to their cause than Kayla McKeon, the first registered Capitol Hill lobbyist with Down syndrome.

“I make personal connections, tell personal stories,” said McKeon, 30, who works for the District-based National Down Syndrome Society. “It’s hard for them to say no.”

McKeon, a New York native, has already shown her lobbying chops by helping to get a bill signed into law in December that allows people with disabilities to save greater amounts of money without penalty to their Medicaid benefits.

She said walking around Capitol Hill and persuading lawmakers to do right by people she calls “differently abled” is both exhilarating and humbling.

“I feel powerful knowing I am walking in the same steps as congressmen and women,” she said. “I can feel the power radiating as I walk around the Capitol.” Kayla McKeon speaking to a group of self-advocates and their families at the 2018 National Down Syndrome Society Adult Summit. (Wendy Zook Photography)

McKeon’s first advantage on Capitol Hill is that she can explain the trials of a disabled person from her heart. Her second advantage is that nothing intimidates her. She’s been giving motivational speeches at the Special Olympics since she was 18.

“She’s never nervous,” said her mother, Patti McKeon. “When she gives a speech to a big crowd, I’m a wreck, and she’s calm as can be. She doesn’t care who she is speaking to, it’s like she’s talking to her best friend. That’s a real strength when you’re talking to members of Congress.”

One of McKeon’s favorite phrases is: “I’m ready, willing and able.”

McKeon started her part-time lobbying job in October, advocating for laws that protect the rights of disabled people while making independent living easier for adults like her. She is also taking classes toward her associate degree at Onondaga Community College in central New York.

The hardest part of her job, she said, is getting on the schedules of high-powered people. The easiest part is making her pitches once she’s face-to-face.

“I’m good at being a self-advocate, of letting myself be heard,” she said.

Sara Hart Weir, president and chief executive of the National Down Syndrome Society, hired McKeon. The two first met about six years ago at various Down syndrome events. Weir said she had always been impressed with McKeon.

When they ran into each other last year in Washington, Weir decided McKeon should be on her staff. She had to ask twice, because at first McKeon wasn’t sure whether it was the right move for her.

“I wanted to put somebody on staff like Kayla who would influence members of Congress,” Weir said. “Kayla is one of the most impressive young, vibrant individuals with Down syndrome I have ever met. She’s spunky, she doesn’t take no for an answer, and she’s quite charming. She has all the characteristics of an exceptional lobbyist.”

Although McKeon hesitated at first because it would be such a big life change, she now loves her job.

She lives in Syracuse with her parents, but she commutes to Washington and other cities as needed. She is independent and travels alone, making her way around on airplanes and public transportation, and via Lyft.

McKeon’s lobbying gig — which has led her to meetings with lawmakers including House Speaker Paul D. Ryan (R-Wis.) — is not her first job in politics. She interned for her congressman, Rep. John Katko (R-N.Y.), after meeting him in 2014 at a baseball game fundraiser in Syracuse. “She handed me her card and it said, ‘Kayla McKeon, motivational speaker,’ ” he said, adding that McKeon instructed him to call her. “Right then I knew there was something special about her.”

The two stayed in touch, and McKeon ended up working as an intern in his office answering constituent mail and handling other office duties. She was playing on a Special Olympics floor hockey team at the time, and he showed up to support her and her parents.

Through McKeon, he also started supporting the National Down Syndrome Society and advocating to include people with disabilities in the workplace.

“She really opened my eyes,” he said. “She is an eloquent spokeswoman for her cause.”

Last year, Katko was a co-sponsor of the bill that allowed people with disabilities to make larger contributions to tax-exempt savings accounts. He joked that McKeon would have had his head if he hadn’t supported the measure.

“When she comes in my office as a lobbyist, she’s awesome. She’s all business,” he said.

McKeon’s mother said she thinks her daughter operates fluidly in the workplace in part because she always was in mainstream schools as a child. She had an aide with her to help her through the school day, but she insisted on being with non-disabled kids rather than in a different school.

“She’s always been a hard worker and also very stubborn, and I think that’s what’s gotten her to where she is today,” Patti McKeon said.

As an adult, it may take her a little longer to learn something new because of her Down syndrome, her mother said, but that doesn’t hold her back. One of McKeon’s proudest achievements in recent years, she said, was getting her driver’s license in 2015. She had to take the road test five times before she passed.

Her other accomplishments include being a World Games athlete and competing in bocce in the Special Olympics in Greece in 2011, where she won a silver and bronze medal. In the Special Olympics, she has also competed in track and field, bowling, soccer and softball. Additionally, she is a congressional athlete member and ambassador, meaning she gives public speeches on behalf of the Special Olympics.

And one of her favorite newer accomplishments is a podcast she hosts called “Kayla’s Corner,” in which she has interviewed people including Weir, Katko and Rep. Paul D. Tonko (D-N.Y.).

Her mother said she frequently hears from parents who have children with Down syndrome and other disabilities.

“I can’t tell you how many people say to me, ‘She’s such an inspiration. Look what my child might be able to do,’ ” Patti McKeon said. “She loves being a role model for other people.”

Soon, her mother said, she thinks triumphs like those of her daughter will not stand out as remarkable.

“Things are changing, things are getting better for people with Down syndrome,” she said. “Kayla is a tip of the iceberg. It will be a common thing someday.”

For now, McKeon said she’s proud of her work helping herself and others as the first registered lobbyist with Down syndrome.

“I feel like I’m making a huge difference,” she said. “And I’m making history.”

Allison Klein Allison Klein has been a reporter at The Washington Post since 2004, with a hiatus from 2013 to 2017. She anchors the Inspired Life blog, writing about surprising or unusual tales of humanity. She spent many years covering crime, policing and police policy. Previously, she worked at the Baltimore Sun and the Miami Herald. Follow