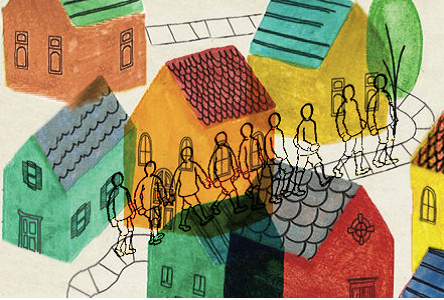 We need to focus less on creating barriers and identifying what makes our children with disabilities different and focus our efforts towards tearing down barriers.

A few weeks ago, I watched a TED talk about children with disabilities presented by Torrie Dunlap. Torrie has worked with children with disabilities for years and what she discussed was mind blowing. When I say mind blowing, I mean it forced me to question my mindset on how I parent my own child with autism. Have I spent too much time treating him as if he is so special to the point that I have been advocating for him to be “separate”?

When there is more focus on creating events and classrooms dividing children based on abilities, we are over correcting the problem that we had 60 years ago that involved hiding and institutionalizing children based on society’s labels. In Torrie’s talk, she discussed two different types of conceptual models of disability, the medical model and the social model.

The medical model focuses on what we need to do to fix our children. We spend most of our time analyzing what makes each child different from other children. This model leads us down the path of separation. When we think of the medical model, we assume that we need separate events for children with disabilities. When I asked myself the question of why parents advocate for separate events for their children with different abilities, the thought that came to mind was that it was safe and free from judgement. Then I started to question my own way of thinking. With the medical model, I have already made the determination that if I keep my son separate from others, he will stay safe and will be free from other people judging him, but is that the right answer?

The second option, the social model, views people with disabilities differently by identifying systemic barriers that lead toward a more restrictive environment and in turn, work to break down those barriers to build a more inclusive way of living for people with disabilities.
Instead of creating ways to separate children based on their abilities, the social model focuses on ways to include all children.

I know, as a mom of a child with autism, I am guilty of focusing on events and choosing educational settings that represent the medical model. I’m learning that in order for Broden to grow as a person and for him to become more independent, I need to move towards a more inclusive approach.

Thinking about my neighbors moved me to start changing my mindset on how I integrate Broden. Our family has grown close to Nicole and Al as we have spent more time together. It started with talks in the backyard, to asking to watch each other’s dogs while we were on vacation, to hour long talks in each other’s homes after a long day of work.

I remember when our neighbor, Nicole, started to ask more questions about Broden and then asked me how she could care for him so I could go to the store. More interaction between Broden and our neighbors allowed them to start building a relationship. He would acknowledge them when they said hello and would come downstairs and sit on the couch when they would come to visit.

A few weeks ago, I received a text message from Nicole saying that Broden had left our house, walked next door to their house and they needed help. I was scared because this was the first time Broden had independently left our home and, to be honest, I was also embarrassed. I thought to myself, “They must be annoyed with Broden to have him just barge into their house.” Running over, I was already planning out how I was going to apologize profusely.

When I ran in the door, I was already repeating, “I’m sorry” over and over again. Nicole ran over to me and grabbed my arm and said, “No, I didn’t text you to tell you to come get him. I texted you for help so Al and I could figure out what he needed. I think he wants on our Wifi, so I’m putting it on his iPad.” I stood there in their hallway speechless and then repeated, “I’m sorry. He’s never done this before.” Nicole and Al smiled and Nicole said, “No, this so awesome Shelly. He knows us and he actually put his hand on my arm to get my attention! I just needed to figure out how we could help.”

Why was I so focused on how I was going to apologize and why did I assume Broden was going to be an annoyance to them? Why didn’t I spend more time teaching them about Broden so if he came over in the future, they would know what to do? Maybe because I was so focused on keeping him separated from others and I should have done a better job of finding ways to include him— because the more I include him in neighborhood gettogethers and other outings, others will learn how to communicate and work with him.

A week after Broden’s infamous “jailbreak”, I was sitting out on the back porch watching Broden enjoy our neighbor’s swing set. Al was leaving the house and I don’t think he saw me, but he saw Broden. He smiled at Broden and said hello. Broden looked over and did a quick wave to acknowledge him. Al giggled to himself and walked up the stairs to his Jeep. It felt good to know that Al saw Broden that morning and took the time to engage him. Broden can never have enough of this in his life.

After watching Al smile that morning, I realized we also rob the rest of society the joy our children with disabilities bring to our own lives. As parents, we see our children as gifts and we need to share the joy they bring to our lives. •