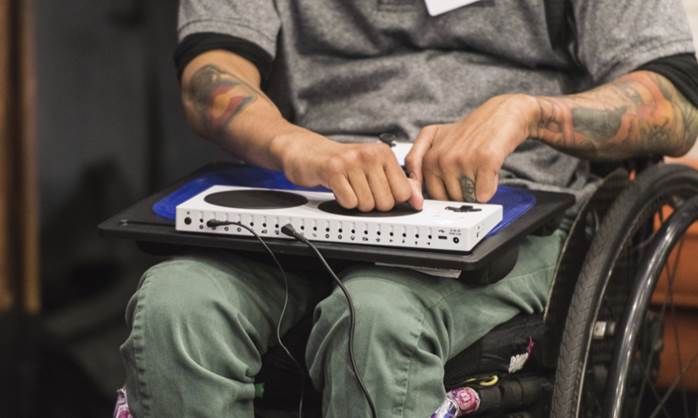 I’ve been gaming for as long as I can remember. It’s always been one of my favorite ways to connect with people. My father got me started when I was young, introducing me to games that I probably shouldn’t have been playing but that I loved anyway. Games like Diablo, Final Fantasy VII, Wolfenstein, and Doom helped to shape my life and brought me closer to my dad than other activities might have. Later in life, after I joined the US Army and rose through the ranks to Captain, gaming while deployed in Iraq help to bring myself and the soldiers under my supervision together during our downtime. I expected that gaming would always be a big part of my life.

That all changed on the night of August 7, 2011, when a motorcycle accident left me paralyzed with a spinal cord injury. A diagnosis of a fracture of my C6 vertebrae meant that I’d never again be able to do the things I’d taken for granted to that point. Walking, driving, and enjoying the great outdoors now all seemed out of the range of possibility. I was sure that my gaming life was over, too, as I could no longer hold a traditional controller, much less move analog sticks, pull triggers, or press the small face buttons. While I could still move my hands, I no longer had micro dexterity – or the ability to use my fingers.

My life changed once again in late 2016 when I met Ken Jones, the founder of an all-volunteer, non-profit called Warfighter Engaged. Ken founded Warfighter Engaged in 2012 as a way to use his mechanical engineering and design expertise to help severely wounded combat veterans do the things they thought they would never do again. A lot of their work revolves around gaming, as many of us veterans like to spend our free time gaming but are unable to play games with traditional controllers or input devices.

While the work Warfighter Engaged does is important and makes a huge impact on the lives of countless veterans, the unfortunate reality is that all of this work is very expensive. Even outside of the work needed to engineer and produce these custom units, you’ve got to pay for the modified controller and then the separate inputs like buttons and switches, which can be quite expensive. Ken’s been paying for this stuff out of his own pocket, which is a testament to how important this work is to him—and shows how he understands the role of gaming in people’s lives.

That’s part of why we’re all so excited about the Xbox Adaptive Controller, which aims to give gamers with limited mobility with more options than ever at a fraction of the price they’re paying now. We’ve been using the Xbox Adaptive Controller at Craig Hospital in Denver, Colorado (a world-renowned rehabilitation hospital that exclusively specializes in the neuro-rehabilitation and research of patients with spinal cord injury and brain injury) for a couple of months now provided by the Microsoft beta program, and we’ve all been amazed at how easy everything is. There are no complicated setups or convoluted directions to follow. It’s as close as anyone has come to a standard plug ‘n play device for our community, and we’re able to swap our plug-ins quickly and with minimal effort.

Best of all, it works every time. One of the big issues with homemade (or ‘Frankesteined’, as I like to call them) setups is that it’s not uncommon for buttons to stop working, for analog inputs to lag, or for any other host of problems to crop up, leading to frustration and disappointment for people that have to deal with that plenty when not gaming. When we use the Xbox Adaptive Controller, mapping buttons and inputs is straightforward and simple, and they just work. We end up spending more time laughing and having fun than we do trying to troubleshoot.

The Xbox Adaptive Controller is compatible with a wide range of external input devices and can be highly customized through the Xbox Accessories app on Xbox One consoles or Windows 10. For example, when I play Call of Duty or PLAYERUNKOWN’S BATTLEGROUNDS, I use a lap desk with a sticky substance called Dycem on it with an Xbox controller on my left, the Xbox Adaptive Controller in front of me, and three large buttons on the right side that are mapped to the left trigger, the X button, and the Y button. Those three buttons are the biggest challenge for me using a controller, so being able to have them easily accessible has been great. With the Ease of Access settings on Xbox One, I can swap the trigger inputs so I can hold the button mapped to the left trigger to aim down sights while hitting the reload button with my forearm. I’m been using the Xbox Adaptive Controller provided through the beta program for a few months, so I’ve had some time to figure out how I like my setup for different games. Others using the controller will need to discover what works for them, too.

Having gaming back in my life, after thinking that I’d give it up entirely, has helped to empower me in ways I never expected. A couple of months ago, I ran in my first Spartan race! And I know I’m not alone. The recreational therapists I work with at Craig Hospital have noticed that gaming together increases the level of happiness and camaraderie amongst the patients almost immediately, and that their patients have gone from staying in their rooms to spending more time together, socializing over video games. The Xbox Adaptive Controller is a big factor in removing barriers and ensuring that gamers with limited mobility can play together and socialize together.

Gaming is a huge part of life for so many of us, and I couldn’t be happier that the Xbox Adaptive Controller is here to enrich even more lives. In the future, I feel like we’ll be seeing more and more communities embrace it and help to grow the industry in ways we might not even expect. I think there will be more people who never considered themselves gamers jumping in, and more gamers with limited mobility competing in e-sports than ever before. I can’t wait to see what sort of doors the Xbox Adaptive Controller opens for all of us.