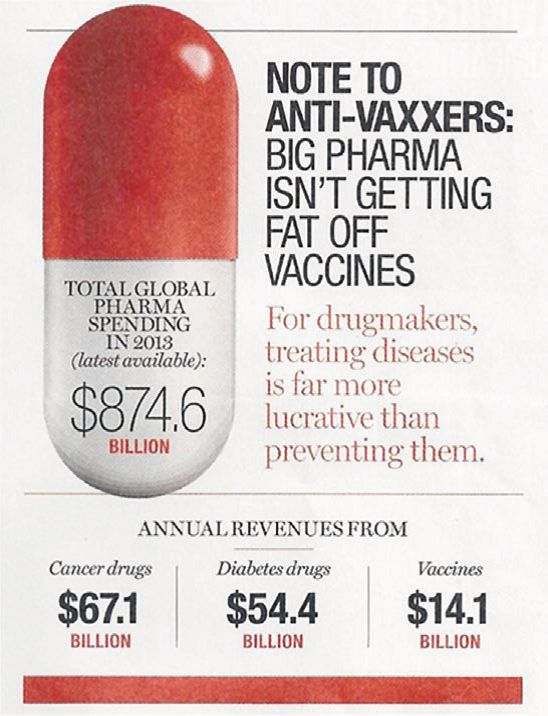 Bulletin: “Measles vaccine reduces death from other diseases.” Having the measles disease somehow disrupts the immune system to combat other diseases, which the child may already have had sometime in the past. “Not only is measles extremely contagious and deadly, it creates a kind of immune forgetfulness.” (May 2015) 1

In a 2004 EP magazine commentary, we suggested the idea that “health is something you don’t have.”2 The intent of this statement was to consider the reality that when we are well, we take it for granted. It is only when something “goes wrong” that we consider our “lack of health.” It is like the battery in our car; it only comes to our attention when the car doesn’t start. The emphasis in that first article was the impact of the limitations on individual persons with special needs. The consequences of considering our health only when we don’t have it has taken on new meanings during the recent years, as our nation and other countries consider the impact of the refusal by individuals to accept proven standard procedures to assure our health and that of our children.

BACKGROUND
In 1998, a British physician, Andrew Wakefield and co-authors,  published in the journal “Lancet” a study in which he suggested the existence of “a new variant of autism” associated with intestinal inflammation. He proposed the administration of the measles, mumps and rubella (German measles) (MMR) vaccine as a possible cause of the inflammatory process.

“The hypothesis suggested by Wakefield led to a drastic drop in vaccination coverage in the UK and to the failure to achieve adequate levels of immunization in many countries, with a consequent increase in the incidence of measles and its complications. Wakefield’s work stimulated a broad discussion in the scientific community and many studies conducted over the next few years contradicted the research results of the English physician. In 2004, journalist Brian Deer conducted an accurate investigation that revealed how the Wakefield research presented many irregular aspects and was performed with predominantly economic objectives. In 2010, Wakefield was expelled from the General Medical Council, while the ‘Lancet’ retracted the paper.” 3

The Wakefield episode has been a factor in the increased number of families in the United States refusing to have their children inoculated against an array of viral diseases. A record number of
measles cases during 2014, with 644 cases from 27 states were reported to the Centers for Disease Control. This was the greatest number of cases since measles elimination was documented in the U.S. in 2000. (see Figure 1)4

“Most of the 170 cases (74%) are part of a large, ongoing multistate outbreak linked to an amusement park in California.”4 In addition:
• The majority of people who contracted measles were unvaccinated.
• Measles is still common in many parts of the world including
some countries in Europe, Asia, the Pacific and Africa.
• Measles can spread when it reaches a community in the U.S. where groups of people are unvaccinated.”4

REASONS FOR NOT VACCINATING
The internet is filled with any number of sites which “document” the rationale for refusing to vaccinate youngsters and the not so young. For example: “10 Reasons Not to Vaccinate”5
1. “Vaccines have never been proven safe or effective”
“Scientific double-blind studies have never been conducted on a vaccine to determine their safety. Effectiveness cannot be determined unless one is knowingly exposed to the disease entity following vaccination. Only antibody production is measured. See how pharmaceutical companies hide the truth from parents.”5

Response: The vaccination stimulates the production of antibodies as the body’s natural method to develop resistance and protection from a particular disease. Measuring antibody levels provides an indicator of the effectiveness of creating the needed antibody level.

A review of the history of any vaccine-preventable disease demonstrates that virtually always, the number of cases of the disease starts to drop when a vaccine is licensed. For example:
• The measles vaccine was licensed in 1962. That’s when the number of cases started to decline. Measles didn’t completely disappear after 1993. There have just been too few cases to show up
on this graph.6
• If the drop in disease was due to hygiene and sanitation, one would expect all diseases to start going away at about the same time. But if one were to look at the graph for polio, one would see the number of cases start to drop around 1955 – the year the first polio vaccine was licensed.6
• A graph for Haemophilus influenzae type B vaccine (Hib), indicates that the incidence of invasive Hib disease had decreased from 40–100 per 100,000 children in 1980 at the time of the introduction of the vaccine, down to fewer than 1 per 100,000 in 1990.7
• Similarly, the drop in the number of pneumococcal disease cases started to drop in 2000 with the introduction of the vaccine.8

2. “Vaccines do NOT work”
“They may create a temporary increase in antibodies for a particular disease, but this does not equate to immunity to disease.”5
Response: see response to first allegation.
3. “The very first vaccine was a disaster”
“The history of smallpox vaccine demonstrates that the first vaccine resulted in an increase in the disease and created additional health consequences including syphilis and death.”5
Response: The history of smallpox holds a unique place in medicine. One of deadliest disease known to humans is also the only human disease to have been eradicated by vaccination. The first vaccination (in 1798) for small pox (using vaccine derived from cowpox) laid the foundation for this accomplishment.

The anti-vaccination list goes on claiming that vaccines are highly profitable for the pharmaceutical industry, However:8

In addition, the anti-vaccination list goes on these claims that vaccines contain toxic poisons and chemicals, unvaccinated children enjoy superior health and the only way to create true lifelong immunity is through natural exposure to the disease. 5

REASONS FOR VACCINATING
“Vaccination can mean the difference between life and death. In the US, vaccine-preventable infections kill more individuals annually than HIV/AIDS, breast cancer, or traffic accidents.
Approximately 50,000 adults die each year from vaccine-preventable diseases in the US.”9
• Immunizations can save your child’s life.
• Vaccination is very safe and effective. “Serious side effects following vaccination, such as severe allergic reaction, are very rare. The disease-prevention benefits of getting vaccines are much greater than the possible side effects for almost all children. 10
• Immunization protects others you care about. “Children in the U.S. still get vaccine-preventable
diseases. In 2010 the U.S. had over 21,000 cases of whooping cough reported and 26 deaths, most in
children younger than 6 months.10
• Immunizations can save your family time and money. “Some vaccine-preventable diseases can
result in prolonged disabilities and can take a financial toll because of lost time at work, medical
bills or long-term disability care.”10
• Immunization protects future generations. “By vaccinating children against rubella (German measles), the risk that pregnant women will pass this virus on to their fetus or newborn has been dramatically decreased, and birth defects associated with that virus no longer are seen in the United States. If we continue vaccinating now, and vaccinating completely, parents in the future may be able to trust that some diseases of today will no longer be around to harm their children in the future.”10

IT SHOULD BE: “HEALTH IS SOMETHING WE DON’T HAVE
We live in an unsterile world surrounded by an infinite number of unseen life forms that potentially will sicken or destroy us. Some of these life forms reside in our gut and are essential for our survival. In fact, these “bugs” reside in our own family members and our neighbors. In addition, within 24 hours, individuals from virtually any part of the world can arrive in our backyards and bring a surprise hodgepodge of life forms seldom, if ever seen in our communities.It is an understatement to say that we (especially youngsters and adults with special needs) are potentially vulnerable to an onslaught of these unwelcome visitors.

Yes, no aspect of life is without potential danger. We drive, fly, sail, eat food grown in all parts of the world, ski, sky dive and (most important) we take our health for granted – until something happens. Preventive efforts are not always perfect, but they give us a chance.

When it comes to diseases, we cough and sneeze on each other (claiming “I’m no longer contagious”). When it comes to vaccination, we have advanced greatly since 1798, when Dr. Edward
Jenner used the cowpox virus to shield us from smallpox. We have learned that efforts to prevent the spread of disease works best with “herd immunity” (the protection of populations from infection which is brought about by the presence of increased numbers of immune individuals. It is the extension of the protection imparted by an immunization program beyond vaccinated to unvaccinated individuals). We need to think collectively rather than individually. “The need is to realize that health is something we don’t have, rather than something I don’t have.” 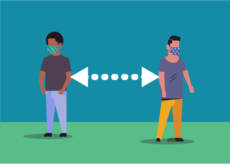