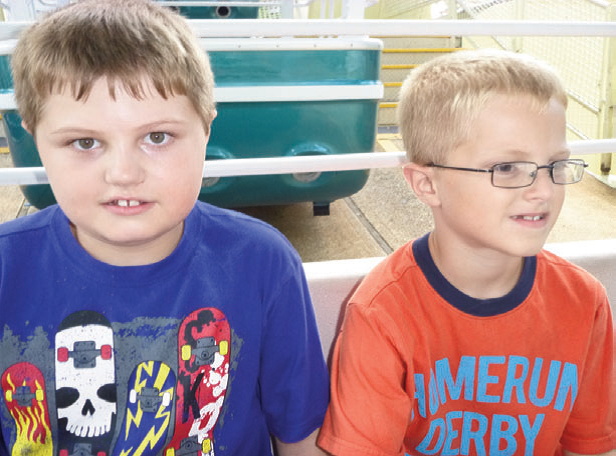 To the casual onlooker it was not a remarkable scene. A middle-aged mom trudging through the rain, huge beach bag slung precariously over her shoulder while clutching the hands of a ‘tween and a younger son, heading for the
relative paradise of a movie theater overhang. If anyone had cared to look they would have viewed a grim determination in her eyes, a desire to reach her destination etched into the lines on her face. Someone might have wondered why she looked so serious, as it was just a day at the movies after all. Except, it wasn’t simply that.

It was the first time she’d ever taken both her autistic kids on an outing, solo. I’m aware that taking two or more kids to run errands or attend an event is not a rare occurrence in neurotypical world, and to some extent not in the
world of autism either. Trust me, my reticence in bringing both boys out on my own was not due to a lack of desire,
but rather due to a need to keep both of them safe. For the last few years Justin has often refused to remain in even the most entertaining locations for more than half an hour and, until now, brokering deals with my younger son about leaving places early was simply not in the cards. Also, both are impulsive and had a tendency to try to run
away if annoyed (or in Justin’s case, if he’d sensed a carbohydrate was nearby.) It just wasn’t safe for us to venture out on our own, so either I’d corral someone to go with me, or we’d stay home. Since I’m an out-and about girl, this situation did not sit well with me, and I longed for the day we’d brave the wilds of the world, just the three of us.

Finally, that day has come. I was able to make a deal with Zach that if Justin wanted to leave the movie early we’d do so, but that he’d get to view it again at another date. I explained to him that he had to stay at my side at all times as well, and he comprehended both points, and promised to comply. I’ve worked diligently with the assistance of a BCBA to get Justin to the point where he can attend an entire film, so I felt confident we had a shot of pulling this off.
Plus, I took them to AMC’s showing of the “autism movie,” where almost any type of behavior goes. I was not taking any chances. I have to share with all of you that they were excellent. Zach stayed glued to my side, and took it upon himself to hold Justin’s hand and guide him to the trifecta of tickets, bathroom, and popcorn acquisition.

In perhaps a moment of divine intervention, Justin’s BCBA who was working with another family happened to sit down behind us, so I felt covered. And last, by parceling out our popcorn supply, I managed to satisfy both boys’ junk food requirements, and even got to sneak a few kernels when Justin wasn’t looking. I’ll share with you that popcorn stealing from Justin is no mean feat. We had a great time together, enough so that if I really get brave I can contemplate an afternoon at the boardwalk, or perhaps even a few hours at Great Adventure. I’m certain each time my heart will reside somewhere in my throat for the duration of the event, as with autism things are often unpredictable for my boys. No matter how old they become I may never entirely relinquish that feeling. But today I’m going to banish those thoughts and just revel in our accomplishment.

I have to tell you that if two or three years ago someone had told me we’d be able to do this together, I would have laughed and suggested it might be possible once Zachary could drive. I remind myself as I embrace this new and welcome change that I must keep myself open to their recent forays into independence, help shape them so that more and more things are possible for this family. As we exit the theater I look down at my smallest son and smile, and ask him if he liked the film. He replies in the affirmative, and states he’s having the best day ever, a sentiment I hope he retains when I ask him later to clean his room. Justin is “eeeing” rather quietly next to me, rocking slightly
on the balls of his feet as we make our way to the car, a slight grin emanating from his face. My boys are happy. I have to remember they’ve matured, that it’s okay to take chances now and again. And as always, I have to nurture hope.•

ABOUT THE AUTHOR:
Kimberlee Rutan McCafferty has written several articles for EP magazine. She is also the author of Raising Autism: Surviving the Early Years, a memoir about parenting her two boys, both of whom have autism. It is available at www.amazon.com