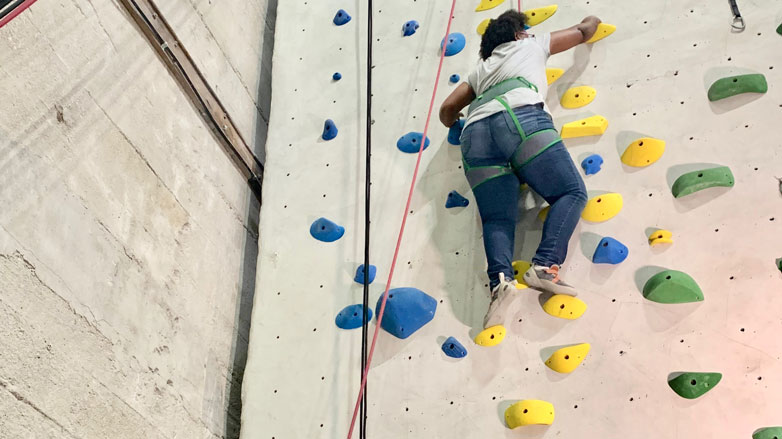 In an indoor rock-climbing class for patients with hand differences, a wall is just part of what they’re learning to surmount.

For the fourth time Akira has called out the one-word cue, prompting her rock-climbing instructor, Quinn, serving on the ground as her belayer, to “take” some slack out of the rope—that is, tighten it so she can sit back in her harness, stuff her hands in her chalk bag, and pause. She is halfway up the wall, but a good 20 feet in the air is struggling, and now stalled. 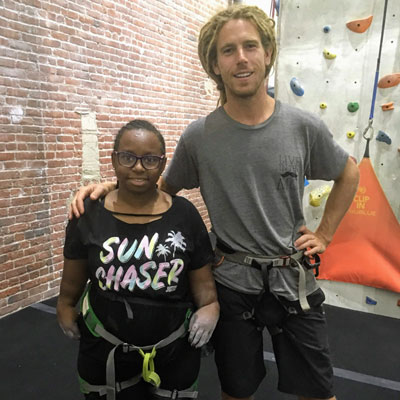 Minutes earlier, she had little problem bounding up a slightly easier wall inside the Stronghold Climbing Gym near downtown Los Angeles. That one was a 5.5; the wall she is on now rates a 5.6—a notch more difficult, with the hand- and footholds angled more awkwardly and not spaced quite as hospitably. She has already slipped once, triggering Quinn to instantly stiffen the rope to get her centered again.

One could guess her internal dialogue has been joined by an old voice, full of gloom and doubt, the one that told her upon first glance at these walls that a girl with her disability wasn’t built to climb them: “You can’t do this. You won’t be able to do anything.”

She came to Stronghold as one of the original cluster of patients from Children’s Hospital Los Angeles’ CATCH (Center for Achievement of Teens and Children with Hand Differences) program to enroll in the gym’s adaptive rock-climbing class. Born with a genetic disorder called TAR syndrome—thrombocytopenia with absent radius—Akira, 12, is missing the radius bone in both forearms, so her arms are shorter than the norm. Resting at her waist, they bend inward and won’t straighten. She is prone to flare-ups of self-consciousness, like wearing a jacket when it’s warm out to keep her arms from view.

But indoor rock climbing has empowered her, her mother, Tamara, says, charging up her confidence and improving her physical strength. Plus, it has called on traits she already had.

“She’s always been very independent, from the time she was little,” Tamara says. “She’s always had that I-can-do-it attitude.”

That spirit appears to be waning now. She has to come to a mid-climb reckoning: Abort or push on?

If she conceded and asked Quinn to bring her down, the CATCH program creator, CHLA orthopaedic surgeon Nina Lightdale-Miric, MD, would tell Akira there’s value in an unsuccessful attempt. She may well be playing back to herself the doctor’s encouraging line: “Coming down is not quitting.”

No, it’s not. But it’s not finishing either.

It’s not easy to use dialect to capture the Kiwi accent of van Beek, a native New Zealander, so we won’t, except to say that when he says it, Dave van Beek sounds like Dive van Bike to this American ear. But one can make out enough to know that van Beek delights in hearing the anecdote about another of the CATCH rock-climbing students, Sebastian, who tepidly agreed to attend class (“I had to drag him there,” his father says) and wound up staying 4 ½ hours, so enthralled by the activity that he had to be persuaded to go home for fear he would injure himself.

Van Beek runs the adaptive rock-climbing program at the Stronghold Gym. He has seen this U-turn before—initial reluctance followed by supreme buy-in. “Not always the first time,” he says. “For some people it’s the second and for some the third. But usually within those first three sessions, something magical happens.”

He began the program two years ago in collaboration with Dr. Lightdale-Miric. They had adjoining interests that collided. Van Beek, who as an instructor for Outward Bound New Zealand helped develop adventure courses for people with physical and intellectual disabilities, was looking for a way to get adaptive rock climbing into the gym.

Meanwhile, Dr. Lightdale-Miric had taken note of the boom in indoor rock-climbing facilities and heard from patients about the benefits the sport was having on their weakened limbs. The two had a connection, Allison Tarrasch, a physician assistant with CHLA’s Children’s Orthopaedic Center, who taught yoga at Stronghold and introduced them.

“The people who were looking for each other found each other,” Dr. Lightdale-Miric says.

At a CATCH program picnic, van Beek put up a display to try to recruit families to the new Saturday rock-climbing class (since moved to Wednesdays). “I’m sure many parents walked by it,” Dr. Lightdale-Miric says, “and thought, ‘That’s going to be something my kid can’t do. He only has one hand.’”

She knew otherwise. Through CATCH, Dr. Lightdale-Miric had implemented activities that parents might have figured were strictly for the two-handed—piano, for example. She had forced a reconsideration of expectations, potential, self-image and terminology, asking her patients to swap out disabled and replace it with differently abled.

“So it’s not a matter of, ‘Can I rock-climb?’” she says. “It’s, ‘How can I rock-climb?’ This label has been on these children their whole lives. If they should happen to win a tournament, they’ll be told the disabled kid won the tournament. The word disabled is accusing. With rock climbing, getting to the top crosses off that word in their mind.”

Van Beek thought the same. In four years at Outward Bound, he found that people with physical differences could have as rich an experience as anyone else. In addition to rock climbing, he introduced adaptive sailing, hiking and kayaking—adaptive, not altered.

“We were running eight-day wilderness programs,” van Beek says, “and through that I saw just how much more people could do than what they thought, and also way more than most of their family, friends and community thought.” 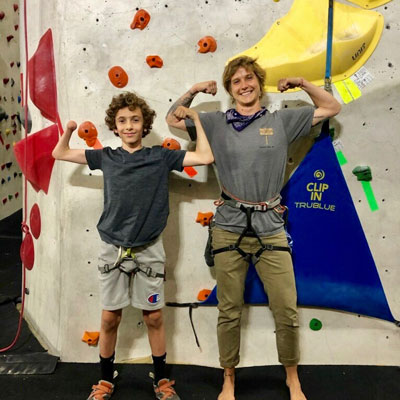 The adaptions van Beek has created for the CATCH patients are minimal, and they tend to wean off them quickly. A chest harness helps to keep them close to the wall and prevents them from turning sideways, what’s called barn-dooring. The holds tend to be closer and in greater numbers on the beginner walls. Other accommodations are merely commonsense: Sebastian climbs with his stump taped up to protect it from scuffing.

Ahead of every other modification, van Beek believes, is one that has to happen to the mindset—not the climber’s but the instructor’s, who must abandon any presumption of a limiting disability.

“It’s amazing when as an instructor you have belief in people in a gentle, positive way, how they gain that belief,” van Beek says. He says the CATCH students who imbibe that energy see comprehensive benefits.

“Extension improves, grip strength improves, function improves. Fine motor skills and major motor skills both improve. On a more personal level, the growth in confidence is obvious, that self-belief. I’d put equal weight on both. One leads the other.”

Sebastian is an example of that. Age 12, he has struggled with the effects of being born without a hand.

“For as much as he wants to, he’s never going to be able to hide,” his father, Sean, says. “Growing up you’re different. You feel excluded from a lot. Everything is hard. Tying your shoes is hard. Opening up a can is hard. Being able to find this gym and the people in it, he’s found this community where it just doesn’t matter.”

Sebastian always suffered from some sort of asymmetry, with his fully formed side dipping a bit from carrying most of his weight and muscle. Rock climbing has started to even him out some.

“It’s giving him the kind of workout on both sides that he needs,” Sean says. “He comes home wiped out, and that is something that he has lacked, really throughout his whole life.

“We saw a difference that first day. He did 14 individual climbs, starting on the smaller walls and working all the way up to the maximum-height walls. To see the enthusiasm when we left: ‘This is my new thing and I’m doing it next week.’ And then to see him bond with the people there, it had unintended benefits—not just the workout, but something social that was missing from his life. I wasn’t expecting it, to be honest. I wasn’t expecting it at all.”

Akira has a similar story. Van Beek says she used to arrive at Stronghold wearing oversized shirts and feeling timid about her body. Now she comes in gym clothes with her head up, confidently steps into her gear, chalks up, executes a series of safety checks, and goes through the ritual exchange with Quinn before pouncing on the wall.

The phrase makers have told us it’s not about the summit, it’s about the climb, but Akira will save the consolation of a valiant effort for a different day. She gets back on the wall and calls for a take four more times to reset as she advances higher. Quinn can see she’s having trouble positioning her feet on the holds, which are turned inward, so he tells her to push off them quickly. “You got it!” he calls up to her.

She taps the top, continuing to coolly follow climber protocol. “Ready to lower,” she calls down.

It played out just like Dr. Lightdale-Miric would have designed. She says the program’s ultimate benefit on her patients is instilling resourcefulness and autonomy, putting them in situations where they have to make spontaneous adaptions of their own to account for their differences.

“You’ve learned,” she says. “How do I problem-solve when I can’t find a place to put my hand? What do I do when I can’t grab tight?”

If they can respond on the wall, Dr. Lightdale-Miric believes they’ll be prepared when in a jam back on ground: “What do I do when I’m in an airport and I need to pick up my bag and can’t figure it out? What if I’m cooking and I’m carrying boiling water and I need two hands to carry the pot? How do I problem-solve this situation? How do I get out?

“We’re saying that in a safe, welcoming community, come explore your strength,” she says. “You can problem-solve, you can be resilient. You have the ability to do this. Let us show you that you can get to the top of that wall.”

The perspiration on Akira’s forehead now glistens like the wide smile she wears. She admits she nearly bailed on the climb midway through because of the problems she was having placing her feet. “I was very close,” she says. But she saw the route got easier through the final third, so she saw it through.

So then, is it true, Akira, it’s the climb, not the summit?

Better to ask another time. This is a day she’d say it’s both.

How you can help