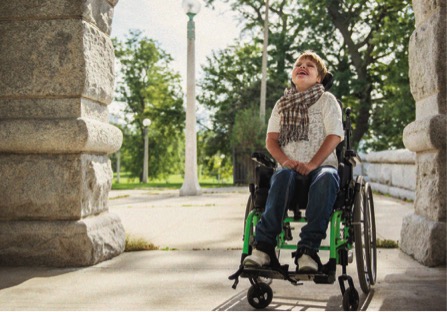 INTRODUCTION
Individuals with special needs are no longer “invisible”. Step by step, they have moved out of institutions and back rooms of residences and are assimilating into everyday life. Now, they are moving into a world that many crave and enjoy – travel and tourism. Consider some of the major transforming steps that have occurred in the past years.

Step 1. In the 1840s, activist Dorothea Dix lobbied for better living conditions for individuals with varied mental conditions after witnessing the dangerous and unhealthy conditions in which many patients lived. Over a 40-year period, Dix successfully persuaded the U.S. government to fund the building of 32 state hospitals for care of these patients, as well as those individuals with intellectual disabilities. In the mid 20th century, 1) the availability of supportative pharmaceuticals, 2) increasing episodes of public exposés regarding deteriorating conditions in public institutions and 3) a rise in the disability rights movement inspired the mainstreaming of the young and the not-so-young with special needs into community schools, general living and community working arrangements.

Step 2. Before the Education for All Handicapped Children Act (EHA) was enacted in 1975, U.S. public schools accommodated only 1 out of 5 children with disabilities. Until that time, many states had laws that explicitly excluded children with certain types of disabilities from attending public school, including those who were blind, deaf and labeled “emotionally disturbed” or “mentally retarded”. At the time, the EHA was enacted, more than 1 million children in the U.S. had no access to the public school system. Many of these children lived at state institutions where they received limited or no educational or rehabilitation services. Another 3.5 million children attended school but were “warehoused” in segregated facilities and received little or no effective instruction. In 1990, the United States Congress reauthorized EHA and changed the title to Individuals with Disabilities Education Act (IDEA). 1,2

Step 3. The 1990 Americans with Disability Act (ADA) is a wide-ranging civil rights law that is intended to protect against discrimination based on disability. It affords similar protections against discrimination to Americans with disabilities as specified in the Civil Rights Act of 1964, which made discrimination based on race, religion, sex, national origin, and other characteristics illegal. In addition, unlike the Civil Rights Act, the ADA also requires employers to provide reasonable accommodations to employees with disabilities, and imposes accessibility requirements on public accommodations. The ADA includes both mental and physical medical conditions. A condition does not need to be severe or permanent to be a disability. 1,2

Step 4. In the 1999 Olmstead vs. L.C. decision, the U.S. Supreme Court interpreted Title II of the Americans with Disabilities Act to require states “…to place qualified individuals with mental disabilities in community settings, rather than in institutions, whenever treatment professionals determine that such placement is appropriate, the affected persons do not oppose such placement, and the state can reasonably accommodate the placement, taking into account the resources available to the state and the needs of others with disabilities.”3 The US Department of Justice launched an aggressive effort to enforce the Supreme Court’s decision in Olmstead v. L.C., a ruling that requires states to eliminate unnecessary segregation of persons with disabilities and to ensure that they receive services in the most integrated setting appropriate to their needs. 4

TRANSPORTATION
In the last decade, the U.S. Department of Transportation reported that, “…more than 3.5 million people in this country never leave their homes. This translates into a national homebound percentage of over 1 percent. More than half of the homebound, 1.9 million, are people with disabilities. About 528,000 people with disabilities who never leave home experience transportation difficulties.” 5

• Regardless of disability status, personal motor vehicles are used far more frequently for local travel than any other transportation mode. The majority of people, whether with or without disabilities, drive most frequently to get to work, to doctor and medical visits and for shopping.
• Proportionally, fewer people with disabilities travel long distances (100 miles or more one way) than nondisabled travelers. Among both groups, the use of personal motor vehicles (as either passenger or driver) and commercial airlines are the most frequent modes of transportation for long-distance travel.

The types of difficulties encountered in using the transportation system are very similar, as reported by people with and without disabilities. Both groups report bus and airline schedules not being kept, inadequate seating on subways and airplanes, and insensitive drivers encountered while walking or biking.5

“Travel by people with disabilities, also known as ‘disabled travel’ or ‘accessible travel,’ is on the rise. The travel industry is waking up to disabled travelers’ special needs by providing more services and greater accommodation.” 6 (emphasis added)

The Americans with Disabilities Act guarantees that travelers with disabilities receive equal treatment under the law. While this would be the case in a perfect world, it doesn’t always work out that way in real life, especially in foreign countries where accessibility regulations vary widely. Despite having common sense, considerable public sentiment and strength in numbers, travelers with disabilities frequently face inadequate facilities, prejudice, misinformation, general hassles and higher prices than other travelers. 6 Nevertheless …

TOURISM
The tourist’s perspective: Touring provides the break in the usual everyday life; it’s exciting, educational, and provides conversational material for discussion with one’s family and friends and just the stimulus needed to return with a renewed perspective to one’s “usual” daily events.

The tourist industry perspective: Tourists bring jobs, money, development in both urban and rural areas that includes hotels, transportation, support services ranging from restaurants and guides to the endless array of shops for the “essential” souvenirs for the tourists, their relatives and friends (which, upon return to home, all too often question the tourist’s sobriety). For example: It is estimated that “…German tourists make a 2.5 billion Euro contribution to the economy… (and) the European Union countries research estimated that tourists with disabilities contribute 80 billion Euros to the economy using gross demand estimates… (In addition,) overnight trips made by, or accompanied by someone with a health condition or impairment contributed 1 billion Euros to the English domestic visitor economy in the first six months of the year, accounting for 5.7 million trips in total. These latest figures highlight the importance of considering people with access needs, who in (2009) accounted for 12% of all overnight domestic trips.”7 (Note: 1 Euro = approximately $1.08)

Step 5. Tourism for all ages. In all probability, a large component of these expenditures represent spending by and for adults, in particular those with available resources. Nevertheless, they are stimulating an awareness of the “value” and acceptance of the necessity of improved facilities for the vast population of older adult tourists with special needs as that population continues to increase. Indeed, these developments can translate into efforts to provide for youngsters with special needs. Is it insensitive to empathize the financial rewards or recognize the value of tourism for children with special needs? Not if it furthers the emphasis on equality of these children.

Surely, travel and tourism are the next steps to ensure the equality for individuals with special health care needs. •