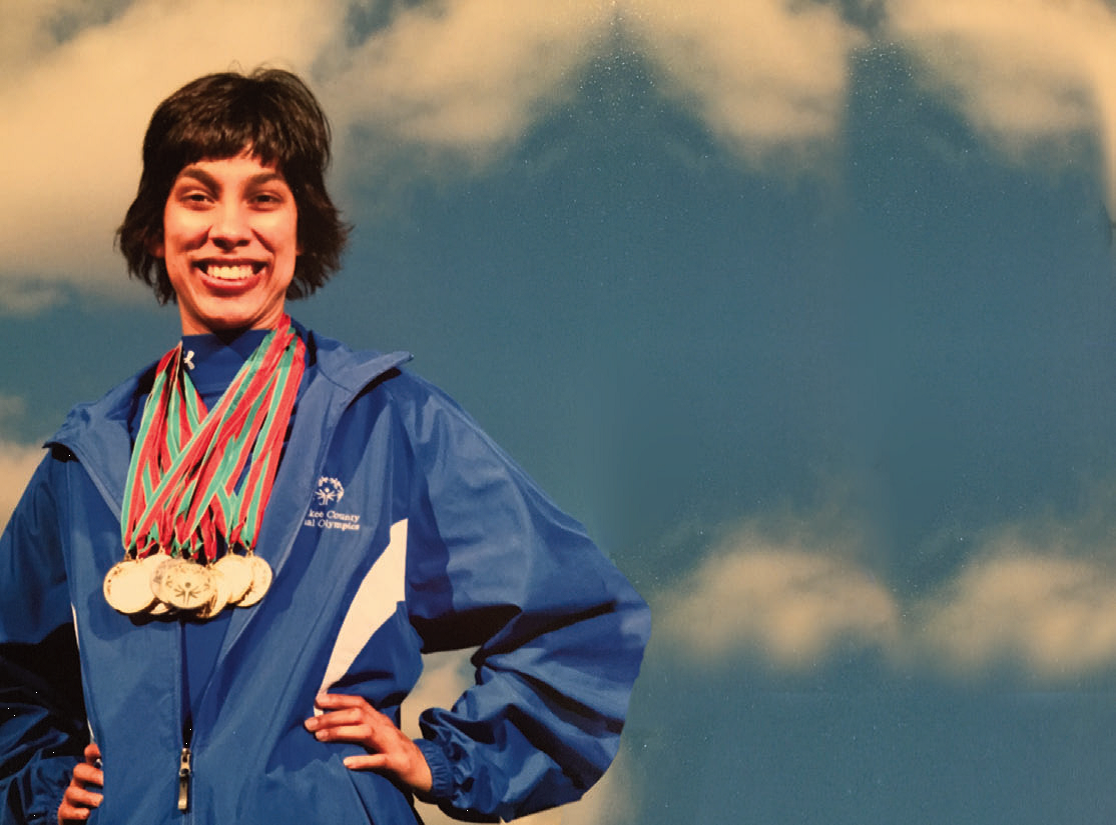 Moving our daughter from a frail little girl who couldn’t open a car door to an all-star athlete did not happen overnight.

After bringing our six-year old daughter, Ani, home from a Bulgarian orphanage it was obvious to us that something was wrong with her mobility. She weighed only 23 pounds and wore a size 2 toddler. Her “diet” had consisted of liquids – a brown-mash type gruel and water, mainly because she had never been taught to chew. As a result, she lacked core strength and was extremely weak. When she walked, she seemed unsure of the next step, almost as though she were walking on a movable sidewalk and couldn’t maintain her balance. She wasn’t able to run with a flowing pace, but rather took awkward gallops that caused her to occasionally trip. In addition, Ani lacked depth perception. She was unable to determine distances between objects and see the world in three dimensions. Because Ani lacked binocular stereoscopic vision or stereopsis, her depth perception was less  accurate. When walking up steps, she would lift her leg way up almost as though she couldn’t determine the height of the step; then, she would kick up her back leg clumsily.

In addition to Ani’s lack of mobility, we knew something else was desperately wrong. Upon testing, we learned Ani was autistic and cognitively impaired. Ani began special education classes and physical and occupational therapy at school. In addition, she began attending private physical therapy.

The first physical therapist recommended to us didn’t know anything about autism and probably less about children with cognitive disabilities. Ani loved going to these sessions because the majority of them consisted of her swinging side to side on a giant disc or rocking back and forth on an oversized log or being tucked in an enormous hammock on her tummy. These exercises fulfilled the sensory movement she desperately needed. Occasionally, she would jump off a “tower” into a pile of pillows. But, during one session, the therapist gave Ani the Perfection! game. In this particular game, the player has to quickly fit all 25 pieces into place before the clock runs out; when time is up, the tray ejects the pieces. Because Ani had difficulty with fine motor skills, she was unable to grasp the pieces much less put them in the proper compartment. The game became frustrating for her. During another session, the therapist wanted to help Ani with her chewing skills. She gave her an Oreo cookie. Ani drooled profusely as she tried to figure out how to bite into it and then what to do with it once it was in her mouth.

These were dark days for our family. We often relied on “professionals” or “experts” whom we  believed would not only help her but support us in doing what was best for her. Several of the experts we enlisted didn’t have the background necessary to give Ani the help she needed. However, no one told us they couldn’t help us. They were willing to “try,” often billing our insurance company for hundreds of dollars and often wasting valuable time that we didn’t have.

But, we were blessed to have in-home therapy for Ani. After a year, we determined the private physical therapy sessions were not benefitting her the way we hoped. We were recommended to another therapist, this time at our local pediatric hospital. This was a summer venture as appointments were during the day and by this time Ani was in school. The goal was to increase her fine motor skills. I knew this experience wasn’t going to move us forward when I had to show the therapist some of the ways in which to help Ani (opening a clothespin, grasping small objects with her pincher fingers, holding a crayon or a pencil). But, I was hoping at the very least Ani wouldn’t lose all that had been practiced at school.

In the fall, we were recommended to another physical therapist. Simma had a plan and a course of improvement. The most important thing to work on was core strength. Ani had a thick, solid band of muscle down the middle of her chest when we brought her home. When she went from a prone position to an upright position, one could see the muscle pop out. However, this muscle did not provide strength or stability. One of the first things Simma did was to have Ani jump on a  trampoline, continuing the routine that Ani did every morning at school. This exercise provided Ani with muscle growth and helped to strengthen her bones. In addition, Simma recommended the trampoline to relieve some of Ani’s anxiety and help her to release energy in a positive way. As Ani grew stronger, she was able to graduate to a scooter. One of her favorite toys at physical therapy was a little scooter that was close to the ground. Ani pedaled the scooter with her feet and rotated her arms for direction. Initially, she could barely maneuver the contraption, but eventually she became quite accustomed to the scooter. After two years with Simma, Ani “graduated” from physical therapy. However, Simma recommended hippo therapy as a challenging activity that would inspire Ani to continue to grow and develop.

We began our hippo therapy journey at Helping Hands Healing Hooves. During her weekly one-hour riding lesson, Ani became responsible for grooming her horse, tacking the horse with the saddle and bridle, riding the horse and unsaddling the horse and providing a treat. A horse’s three-dimensional movements very closely match that of the human gait. Ani began to experience improvements in balance and improved muscle strength. Her muscles started to relax and that muscle band began to disappear. She loved horseback riding, appearing in several low-risk shows that gave her the chance to build confidence in her riding and in her personal strength.

Another great help for Ani came by the way of a recommendation from her art teacher. Mrs. Balistreri’s son had Down’s syndrome, so she knew the struggles we were having with a special needs child. Mrs. B recommended Special Olympics as a way for Ani to improve her social skills and her physical abilities. Ani became entrenched in Special Olympics; she tried almost every sport offered and became proficient at many of them.

The summer before Ani entered middle school, my husband, Mike, wanted to get her involved in the track team. Our son, Max, was a very successful foursport high school athlete, and Mike and I loved being a part of that phase of his life. Mike met with the coach and explained that we weren’t interested in time or records or medals or any of that. We were interested in her making friends and becoming more confident in her abilities.

It wasn’t very long before Ani showed all of us her unique gift as a runner. She was developing the power necessary to run long distances and was learning how to pace herself and how to breathe. When Ani began high school, she became a part of the cross-country team. She was the only girl on the team and ran with the fastest boys in her school. In addition, Ani joined the swim team. While we knew how much she loved to swim, it became evident that the swim schedule would give her what she needed to exhaust her energy and clear her mind. During the school year, Ani had a sport that kept her moving. She ran for two hours every afternoon during the track season; attending track meets and meeting new people. In her freshmen year, she broke the 3200 record!

During the swim season, she swam for two hours every day after school; attending swim meets and again, meeting new people. Ani ran track for two years; deciding that she had enough. However, she stayed in swim all four years eventually earning a varsity letter for her jacket!

Ani graduated from high school in 2015, but remains heavily involved in Special Olympics. She has won dozens of gold, silver and bronze medals for track, gymnastics, and t-ball. She participates in nearly six sports and enjoys the competition and the camaraderie that Special Olympics provides.

It is important to note, however, that moving our daughter from a frail little girl who couldn’t open a car door to an all-star athlete did not happen overnight. We relied on help and support from our in-home therapists as well as from Ani’s school coaches and her Special Olympic coaches. It’s also essential to realize the mistakes along the way. We listened to everything everyone told us and because we were truly “thrown into the deep end of the pool” without any life preserver, there were times when we felt as though we, all of us, were drowning. While I don’t believe anyone purposefully set out to steer us wrong or give us erroneous information, I look back now and realize, very simply, that some people didn’t know what in the heck they were talking about or what they were doing, but because we didn’t know, we assumed that what was said or what they recommended was right. Our lead therapist, Alisa Morrison-Armata, was instrumental in steering us away from the time-wasters to the time-doers; those professionals and experts who not only knew what they were doing, but showed us how to be partners in Ani’s experiences.•

GET IN THE GAME
We want to help others in their challenge to find support and assistance along the way. Here are some quick tips:
1. Network with other parents and teachers. Listen to what they say, but always trust your gut.
2. Find a therapist who has solid credentials, is willing to listen and shows you an authentic plan. Don’t believe someone who says, “In one year, your son or daughter will be doing __________.” No one knows the future, no matter the initials after the name.
3. Learn more about the Special Olympics chapter in your neighborhood. Attend practices and meets and see if it’s the right fit for your son or daughter.
4. Exercise as a family. Ani and I used to walk several times a week; as we walked we sang, practiced numbers and colors.
5. Be patient. The process takes time. Surround yourself with professionals and experts that will invest their expertise into your son or daughter. It may take a while for you to find what your child eeds, but you will find it.

ABOUT THE AUTHOR:
Peg Grafwallner adopted Ani from a Bulgarian orphanage when she was five years, 11 months. Not knowing what to do or where to go for assistance, her family began a journey to learn, ask and  eventually educate. There were extremely dark times when they felt completely alone. But, Ani’s inspiring smile and beautiful spirit has kept the family grounded.