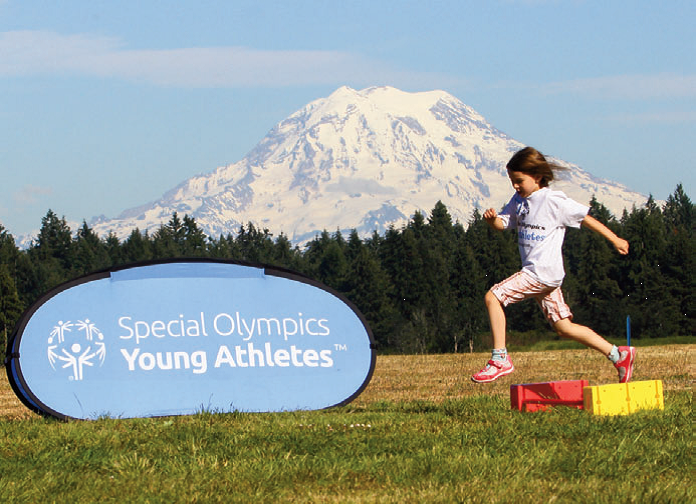 Young Athletes engages families by highlighting the power of play. Young Athletes includes a series of structured physical activities, songs and games to teach basic motor development skills for children with and without intellectual disabilities, ages 2 to 7 years old.

In a small community near Phitsanulok, Thailand, a young boy named Kongpob Yangkam lives with his grandparents and 17-year-old sister. Kong, as his family lovingly calls him, has intellectual disabilities and struggles with hyperactivity and attention span. When he was a young child, he moved with his grandparents to Phisanulok so they could take care of him while they started a small orchard. His mother stayed in Bangkok to work and earn money for the family.

At the age of four, Kong attended an inclusive school in his community, but teachers in the school found it challenging for him to keep up with the other students and they were not able to provide him any special  accommodations. Unfortunately, after a short period, Kong left the inclusive school. Kong’s sister also had to leave school so she could be responsible for Kong’s day-to-day care while his grandparents managed the orchard

However, Kong’s sister proved that the love and dedication of a family member is enough to move mountains. After some time, his sister found the Phitsanulok Special Education Centre. She brought Kong to the Centre where he began participating in Special Olympics Young Athletes, along with other therapies and life skill development programs. The family began to see an amazing change in Kong, but the Centre’s distance from their home, along with constant flooding in the area, meant that Kong was only able to go to the Centre once or twice per week – and his sister knew for Kong to really thrive, he needed support on a daily basis.

Since starting Young Athletes, Kong’s family has seen his attention span change dramatically and his behaviors have improved. Kong will now spend time playing by himself, which allows his grandparents to tend to their orchard and his sister to focus on trying to finish her education. He is also more socially aware and wants to be supportive of his family – he asks if he can help his family members with the house choirs – something that is critical for his family who struggles to make ends meet.

Kong’s story is one of perseverance, love and dedication. Kong and his family are just one representation of the over 160,000 Young Athletes and families around the world who are striving to ensure children with intellectual disabilities are given a chance to succeed.

Often, the time immediately after the diagnosis is a tumultuous one for families. There are so many feelings, including fear, disappointment, confusion, isolation and anger mixed with protectiveness, hope, pride and love. In this time of uncertainty, families strive to find a community that can understand and accept their child, while also supporting them to be successful in the future.

This is where Young Athletes comes in.
Young Athletes engages families by highlighting the power of play. Young Athletes includes a series of structured physical activities, songs and games to teach basic motor development skills for children with and without intellectual disabilities, ages 2 to 7 years old. Through these play activities, we see children grow and develop in valuable motor skills, like walking and running, while also enhancing social and cognitive skills through interaction with their peers with and without intellectual disabilities. The opportunity for growth leads to a change in perception and a recognition for families of the value and worth of their child.

Giving children with intellectual disabilities a chance to learn, grow and have fun is not just nice to do, it is critical. For the vast majority of children with intellectual disabilities and their families around the world, access to comprehensive and effective early childhood development programs is limited and frequently non-existent. During the early years we have the opportunity to impact lifelong success for our athletes – both on and off the playing field. In turn, Special Olympics athletes make our communities better by sharing their gifts. •