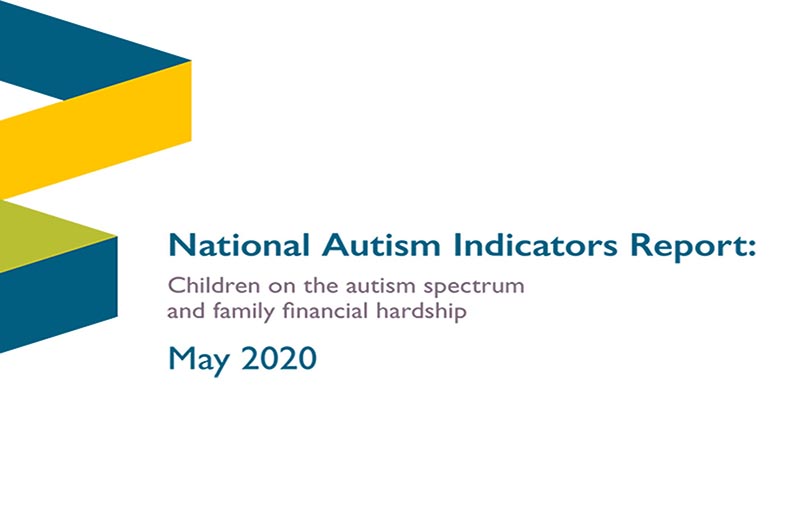 Families living in poverty have fewer resources to spare and are especially vulnerable in the face of burdens like care-related expenses, reduced earnings from taking time off work to cope with caregiving, and disconnection from services and supports.

“I have talked with countless families of children with autism over the past 20 years who are struggling with the dual challenge of parenting a child with special needs AND covering the basic needs of the entire family,” said Paul Shattuck, PhD, director of the Autism Institute’s Life Course Outcomes Program and co-author of the report. “Our hope for this Indicators Report is that it will raise awareness and spark discussion about the ways in which families are struggling and need our collective societal support.”

Safety net programs can help to offset financial challenges through the provision of monetary support and increased access to social services and programs. However, the current understanding of safety net program use among households of children with ASD is limited. And few population-level studies have described the characteristics of children with ASD from low-income households.

The report found households of children with ASD experienced material hardships (not being able to consume goods and services that are deemed minimally necessary) much more often than parents of children with other special health care needs and children with no special health care needs. Nearly half reported difficulty paying for basics like food or housing. Almost one-third had to reduce work to care for their child with autism. About one in five families had problems paying for their child’s health care and roughly 15% had difficulty affording food for the family.

Young children with ASD (ages 3-5 years) and those from minority groups faced an increased risk of material hardship. This was especially common for the subset of households living below 200% the federal poverty level, despite high levels of participation in safety net programs. More than two-thirds of low-income households of children with ASD reported that someone in their family received cash assistance; help from the Special Supplemental Nutrition Program for Women, Infants, and Children (WIC) and Supplemental Nutrition Assistance Program (SNAP); and/or free and reduced-price meals during the previous year.

Children with ASD who participated in at least one safety net program fared worse on three indicators of material hardship (difficulty paying bills, parents reduced/stopped work and inability to afford food) and had higher out-of-pocket expenditures than children who were disconnected from the safety net. Families of children who had public health insurance reported lower out-of-pocket expenditures and were less likely to report problems paying for their child’s medical care than children with private health insurance.

“Findings from this report indicate that younger children with ASD from minority backgrounds might be particularly vulnerable to the effects of poverty and hardship,” said Anderson. “Given what we know about the effects of poverty on the developing brain, and the importance of intervening early to improve outcomes for children with autism, there is a vital need for new resources and programs with targeted support for these families.”

The recently published “2020 National Autism Indicators Report: Children on the Autism Spectrum and Family Financial Hardship” uses data from the 2016-2017 National Survey of Children’s Health (NSCH) to examine family financial hardship among families of children with ASD (ages 3-17 years) and their participation in four safety net programs: 1) cash assistance for poor families with children; 2) the Special Supplemental Nutrition Program for Women, Infants, and Children; 3) the Supplemental Nutrition Assistance Program (also known as “food stamps”); 4) free and reduced-price meals in schools. The NSCH is a survey of child and family health, health care and wellbeing conducted yearly by the U.S. Census Bureau.

This report builds on the 2018 National Autism Indicators Report that found many low-income families of teenagers on the autism spectrum rely on federal safety net programs to help with things like health insurance and paying for food.

Shattuck leads the A.J. Drexel Autism Institute’s Research Program Area on Life Course Outcomes. Most of his current research is aimed at understanding services and related outcomes among youth with autism as they leave high school and transition to young adulthood. His research publications have appeared in high-impact scientific journals including Pediatrics, Psychiatric Services, the Archives of Pediatrics and Adolescent Medicine, the American Journal of Public Health and the Journal of the American Academy of Child and Adolescent Psychiatry. He also has written op-ed pieces that have appeared in leading national newspapers including the New York Times. In 2009, Shattuck’s study on the age of diagnosis among children with autism was recognized as one of the most important autism studies of the year by both Autism Speaks and the Federal Interagency Autism Coordinating Committee. His 2011 study on the use of services by adults with autism was recognized as one of the 20 most impactful scientific studies in the field of autism by the Interagency Autism Coordinating Committee. His 2012 study on postsecondary job and education outcomes was recognized by Autism Speaks as one of the Top 10 research advances of the year.