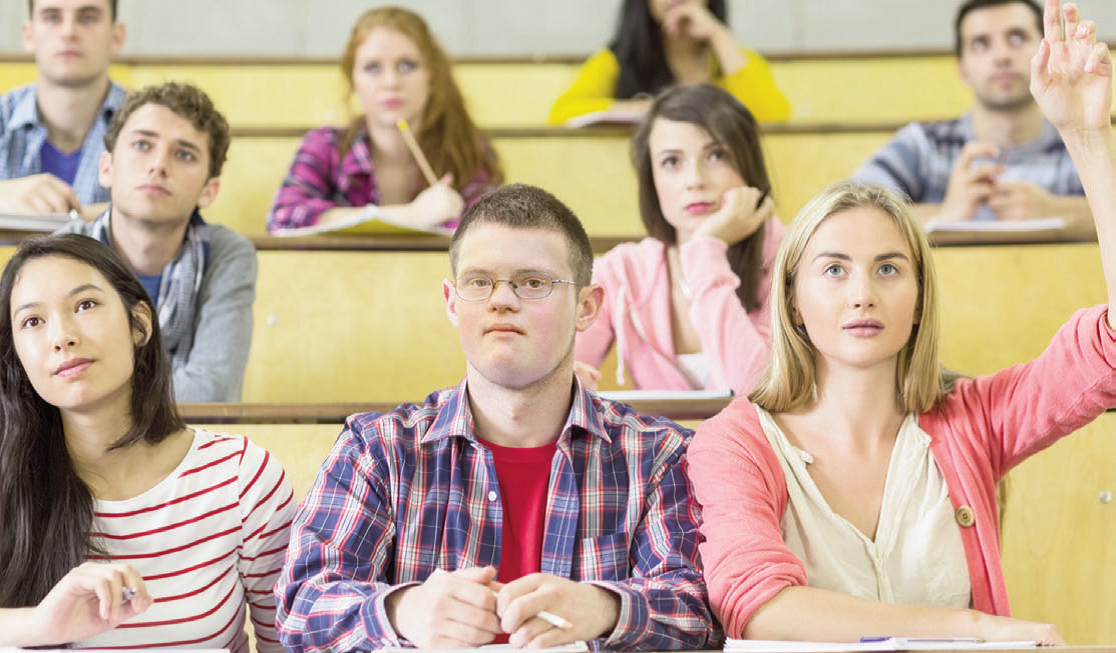 BY TOM SANNICANDRO AND SCOTT LIEBER

INTRODUCTION:
College is the dream of many students across the country, and the ladder to economic opportunity, independence, and a first job [1]. Now, evidence suggests that college provides the same opportunities for students with intellectual disabilities (ID) as for non-disabled students [2, 3].

Employment and earnings outcomes for people with ID were higher if they had taken college classes. Students with ID who attend college are significantly more likely to be employed, make higher wages, and rely less on the government for Supplemental Security Income (SSI) [2]. Over the course of an individual’s life, the individual can make more money, and the taxpayer and government savings is significant.

Students with ID are pursuing, accessing, and benefiting from higher education [3]. They are attending college alongside their non-disabled peers. This is part of a paradigm shift that has occurred over the last half century in the education of individuals with ID. While opportunities for students with ID to access postsecondary education are limited, they are growing [4]. A 2009 survey found 149 programs in institutions of higher education in 39 states that reported serving students with ID [4]. This number grew to 230 programs in 48 states in 2014, with more than  5,000 students enrolled [5]. There are several models that range from enrollment in regular college classes, to special college classes for students with ID, to some mix of these two [4].

A college education for students with ID helps develop skills and employ more people with ID, but it is also a good long-term plan for state and federal governments, which care for this population into old age largely through Medicaid and Supplemental Security Income (SSI). Individuals with ID who had postsecondary education (any education adults access after high school, including four-year colleges or universities, community colleges) had decreased reliance on SSI, by an average of $76.98 per month. The study found a lifetime savings to the SSI program of $48,000 and an increase in lifetime wages of $208,000 per individual with ID who had postsecondary education. The estimated lifetime SSI costs in 2003 dollars for all persons born in 2000 with ID are expected to total $11.5 billion (“Economic Costs Associated with Mental Retardation, Cerebral Palsy, Hearing Loss, and Vision Impairment – United States, 2003, 2004”). Educating more individuals with ID in college would be an economic benefit for the Social Security system, and could save nearly $5 billion.

STATE VOCATIONAL REHABILITATION SERVICES:
In examining employment, earnings, and SSI outcomes, it is important to understand the role of each state’s Vocational Rehabilitation (VR) agencies. The VR agencies’ objective is to provide short-term job training for individuals with either physical or intellectual disabilities in order to get them employed. The VR program is a $3 billion federal-state partnership. The federal government allocates 79% of the cost of the program through financial assistance to the states for services and administration, and the remaining portion is the responsibility of the states [8].

RECOMMENDATION:
There are several recommendations for governments and colleges who need to take an active role to assist individuals with ID to continue moving away from sheltered workshops and toward competitive employment in their communities.

First, parents and teachers should prepare students with ID from a young age to go to college. The expectation should be made early that they will attend college, and a plan for the student to go to college should be incorporated into a student’s Individualized Education Plan (IEP) and their transition services once they reach high school. Students with ID are often in high school through age 21, and so allowing these students to attend college courses will give them skills and prepare them to enter the job market in significant ways.

Second, vocational rehabilitation agencies should invest more money in postsecondary education for students with ID. Vocational rehabilitation is meant to prepare individuals with disabilities for jobs, and it is clear that  postsecondary education trains individuals for jobs. Agencies should be encouraged to make agreements with other state agencies who serve individuals with ID, as well as with colleges, to provide services.

As students with ID are further integrated and college is considered a more viable option, more of these students will attend college, get jobs, earn money, be integrated into the community, and require fewer supports from the state in the form of SSI. This is an exciting new development in education policy for individuals with ID.•

ABOUT THE AUTHORS:
Tom Sannicandro is the parent of an adult son with Down syndrome. He is the Chair of the Joint Committee on Higher Education in the Massachusetts Legislature and a leader in empowering people with disabilities. He has a PhD from Brandeis University and a JD from Suffolk University Law School.
Scott Lieber has been instrumental in insuring students with intellectual and/or developmental disabilities have access to a college education in Massachusetts. He is a graduate of Syracuse University.