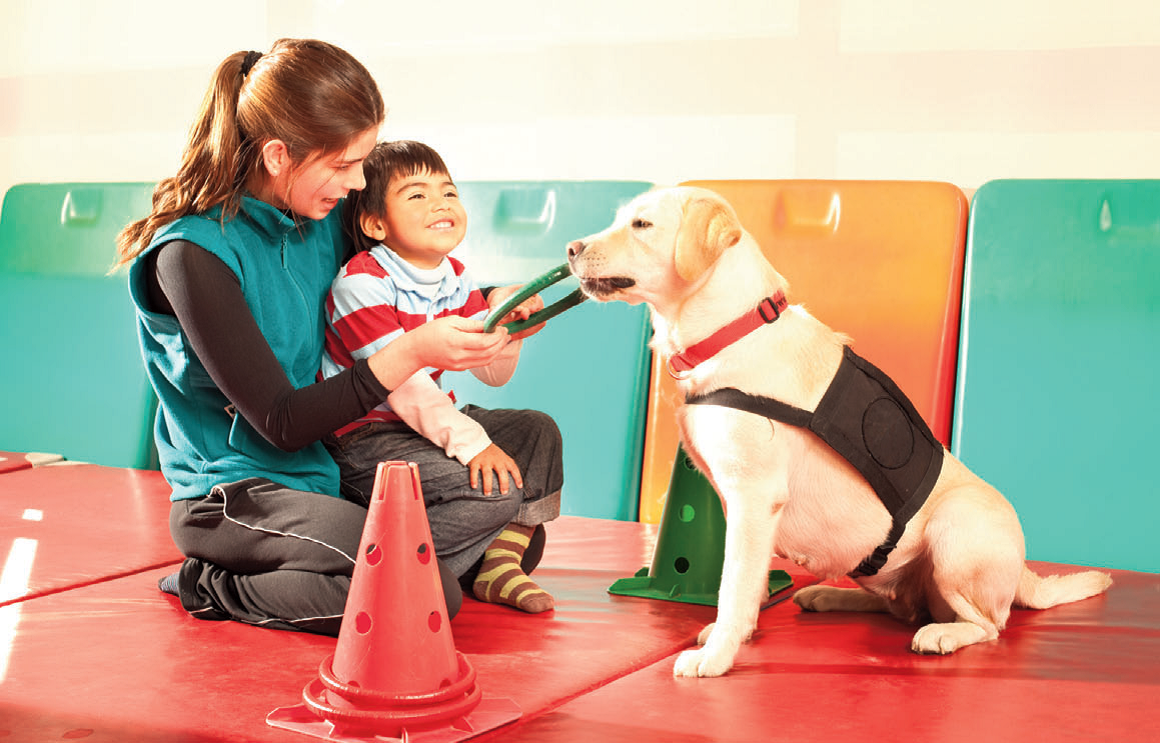 For centuries horses and dogs have been used for work, carting people, plowing, and helping take care of the farm. However, recently researchers have found that animals such as horses and dogs can be useful in other ways, such as animal therapy. Autism spectrum disorder (ASD) is a developmental disability that affects communication skills and social interaction, which as a result affects a child’s educational performance (Heward, 2013, p. 236). Therapists and caregivers have been working with children who have autism spectrum disorder (ASD) by using horses and dogs to improve adaptive and executive functioning, social skills, sensory processing, and communication skills.

As the definition of ASD goes, children who have autism have difficulties socially interacting with peers, family, teachers, and other humans. Animals however, specifically horses and dogs, have an unhurried and comforting presence about them, making interacting with them much easier for many children. The loyalty and unconditional love of a dog is known to bring joy and companionship to families all over the world, however the companionship of a dog to a child with autism can be so much more. Simple tasks such as throwing and fetching a ball, going on walks, giving commands, and other things dog owners do allow children with autism to facilitate interaction that is often very difficult to do with another human (Solomon 2010, p. 149). Solomon (2010) conducted a study that examined the interactions of a child with autism and a few therapy dogs. The study found that after just four short visits, the child with autism had shown significant improvements in social interactions, as accounted for by her mother, the trainer, and the authors (p.155). Therapy dogs are able to provide children with the opportunity to practice and become familiar with social interactions without the stress of being with people. If children get enough practice socially interacting with an animal, their skills will eventually be applicable to engaging in social behavior with other humans. This study also looked at the relationship of the child with autism and her two sisters. In this particular situation, the dog was able to be a common ground, in which the sisters were able to interact together. Having a child with a disability can be very difficult on some families, so the idea of a therapy dog being able to provide a common ground and improve family relationships is extremely significant.

Dogs and other therapy animals are able to provide multi-sensorial and natural stimulation. With this in mind Grigore and Rusu (2014) conducted a study that examined the use of therapy dogs with three children who were diagnosed with ASD to see if there were changes in social behavior of these children. The researchers found that all of the children who participated in the study showed statistically significant increases in the frequency of social interactions when a therapy dog was present. The study also found that the children needed less social prompts to carry out social interaction (p.257). The ultimate goal of working with children who have special needs, autism included, is to improve quality of life as well as allowing the children to become as independent as possible. Social skills are incredibly important to carry out this task, as a person cannot be independent if they are unable to interact with other people. The findings that therapy dogs can significantly increase social interactions with less prompts could be life changing to some individuals and families.

Another form of animal therapy that can increase social skills in children with autism is therapeutic horseback riding (TR), otherwise known as equine therapy. Therapeutic riding requires control, attention, focus, sensory  management, and communication (Ward et al. 2013, p. 2190). Riders must learn to control the horse, using all their attention and focus to stay on the horse and ride. The rider must also communicate with the animal to tell it where to go, as well as manage the new senses that the horse provides. Ward et al. (2013) conducted a study of twenty-one children diagnosed with ASD who participated in therapeutic riding in Virginia to examine the effects of a ten week intervention on the social communication and sensory processing of children with autism in their classroom at school (p. 2191).

This study found that therapeutic riding can be an effective intervention for children diagnosed with ASD, and the skills learned in the therapeutic riding sessions transferred into the classroom. After ten weeks of riding, the teachers of the students who participated in the study indicated that the students improved their social communication skills, as well as their attention, tolerance, and reactions to sensory inputs in class. Parents have also rated their  participating children and noticed that they are more motivated to socially engage with others following the TR, as well as noticed changes in the response to sensory stimuli.(Ward et al. 2013, p. 2195-2196). Teachers and parents are two of the main people who interact with children who have ASD, so the observation of such significant improvements in behavior after participating in therapeutic riding is a meaningful insight on how animal therapy can benefit families and children.

Many children with autism also have sensory/motor difficulties. Children’s senses are often overwhelmed with too much stimulation in their environment. Research has shown that horses and dogs have a natural tendency to relieve stress and anxiety for most people. This relief of stress and anxiety can allow children with autism to relax in an environment that may be very stimulating. During a ten-week therapeutic horseback riding intervention for children diagnosed with ASD, Gabriels found that participants made significant improvements in self-regulation, which includes irritability, lethargy, stereotypical behavior, and hyperactivity. These are all issues that can make an impact on a child at home and at school (2012, p. 586). Gabriels (2012) states that this may be because “…horses may help organize or provide input to the ASD child’s sensory system. This factor may contribute to helping the child feel calm.” (p.586). Behaviors such as irritability, lethargy, stereotypical behaviors, and hyperactivity are often treated with medication. Gabriels (2012) study revealed some accounts of parents and legal guardians who had children participating in the therapeutic riding trial. All of the statements made by the family members indicated that their child was calmer, peaceful, and less anxious after riding. The importance of this is that animal assisted therapy provides an alternative way of treating undesirable behaviors such as irritability and hyperactivity that is not medication that can have unwanted side effects.

Many families have found that their child’s participation in an animal therapy program has improved many skills. A child’s family members are the people who interact with the child the most, and are able to observe changes in their child’s daily behavior and overall state of wellbeing. Any positive change in a child who has autism’s behavior is viewed as a success. LifeStrider is an organization that provides horse riding as a form of animal assisted therapy. They provide services to many types of disabilities, including autism. A parent of a young girl who has autism  provided a testimonial about the experience with therapeutic horseback riding. Her mother states that she has seen “…significant improvements in her strength, communication with the volunteers and staffers, and most importantly, her pride and happiness” (Morgan’s mom, n.d.). A father of a young boy diagnosed with autism had tried many  different types of therapy for his son. Although he was skeptical at first, he found that from day one he noticed changes in his son’s behavior. Nine months later he has found that his young son has been communicating with the family better, “…using more words correctly, wanting to interact with us [the family] and peers, listening to  instructions, dealing better with day to day changes in routine and has genuinely come out of himself” (Langreder, J., n.d.). Not only are parents noticing improvements in their children as a result of animal therapy, but some children themselves are noticing positive changes. When speaking of his therapy dog, an 11-year-old boy diagnosed with high functioning autism states that, “She helps me, she calms me down… Anybody who has autism, anybody in the world would just benefit from this” (Solomon, 2010, p. 143). Perhaps that interacting with a therapy animal is not for every family or every child, however there are many families and children who are seeing tremendous results.

People have a natural tendency to want to be with an animal. This tendency can be used as a reinforcement and contributes to the child’s desire to be in therapy. Not only does animal therapy help with social and communication skills, but it has also been shown to improve general mental wellbeing, self-efficacy, and self-esteem. These things are essential to improving a child’s quality of life, and general functioning in this world (Borgi et al. 2015, p. 2). It is not to say that animal therapy should be the only intervention that families implement for their child with autism, or to say that animal therapy is the right intervention for every child. Animal therapy interventions should be implemented alongside other educational plans and services to best equip children for success. However animal therapy, whether it be dogs, horses, or other animals, has been shown to improve skills that increase the quality of life for many individuals with autism as well as their families. •

ABOUT THE AUTHOR:
Kaitlin Gabriel is a student at Western Washington University earning a degree in Special Education with an Elementary Education Endorsement. Kaitlin has a passion for education and working with children who have disabilities.

Solomon, O., (2010). What a dog can do: children with autism and therapy dogs in social interaction. Journal of the Society for Psychological Anthropology. 143-166.