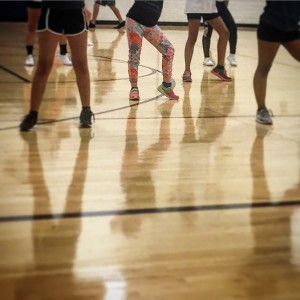 Sophie is trying out for freshman cheer.

Sitting under the fluorescent lights of a big public high school gym for two hours yesterday afternoon, my thoughts veered wildly — from total disgust with our society for condoning (no, make that celebrating) the idea that it’s cool for girls to put on skimpy outfits and jump around with pom poms, encouraging boys to smash their heads into the ground and each other in order to get an oddly-shaped ball over a line, to the extreme envy I’ve felt my entire life, any time I’ve seen a cheerleader.

But mostly I thought about Sophie, and how she’s the bravest person I know.

There are maybe 50 girls trying out  – the gym was packed — and Sophie’s the only one with Down syndrome. (She appeared yesterday to me to be the only one with any sort of disability.) Before they gathered in the gym, the girls met at the track, where they ran a mile. Not every girl made it around four times, but most did. Except for the first few yards, where she sprinted ahead — a tiny dervish in a tank top and brightly-patterned leggings — Sophie was at the very back of the pack. She ran maybe half a lap before stopping to walk, and then trying to stop altogether, before the coaches urged some sweet girls to gently encourage her on.

It was 103 degrees at 5:15 yesterday afternoon in Tempe, and I was a little concerned, particularly when Sophie’s face remained flushed for most of the rest of the evening, even once the girls were sitting in the air conditioned gym and the rest of them seemed fine.

Although she’s very flexible and can do the splits like nobody’s business (thanks to hypertonia, a condition often associated with Down syndrome), Sophie couldn’t do the stretches the other girls did. In the car after practice, she rubbed the spot on her chest where the surgeons sawed her chest open twice many years ago to fix her heart, and said, “The stretching hurt my scar.” But she didn’t complain for the whole two hours. And I only noticed her stick her thumb in her mouth once.

She asked more questions than the others, but for the most part, Sophie was just another girl trying out for cheer. Watching her go through the paces (again, and again, and again — they all had to), her brow furrowed in concentration, I couldn’t help but notice that Sophie tries twice as hard and she’s still a beat behind.

Sophie has been on cheer lines before, in junior high and Special Olympics, but even though there don’t appear to be any gymnastic skills or tricks required here, high school cheer is different. It’s much harder. The routines are longer, there’s more concentration required, precision expected. The stakes in life are getting higher for Sophie, and for the most part there’s nothing I can do to stop it. I thought cheerleading would be an exception. I tried for months to downplay high school cheer, to dissuade Sophie from trying out, figuring it was totally out of reach and much easier to distract her than risk her trying out and being turned down. I encouraged her to join Speech and Debate instead. She just gave me a dirty look. (I am so uncool.)

After she saw the cheer line at orientation, Sophie was obsessed. As with many things involving my younger daughter, I had no say in the matter.

So I’m on the hunt for all-white Velcro tennies since Sophie still can’t tie her shoes, and this weekend I’ll drag my ass to the mall to buy a giant cheer bow (because both all-white tennies and giant cheer bows are required just for try outs — I will never understand this subculture), and my teeth will remain gritted until word comes back next week of whether or not she makes it.

If she does, it looks like I will be attending high school football games. If she does, I’ll be impossibly proud.

And if she doesn’t, I’ll still be proud. Maybe even prouder. It’s what we all look for as parents, right? The opportunity for our kid to try out for something, to reach and attempt and maybe fail. Or maybe not. I almost robbed us of it, this time, but Sophie wouldn’t let me.

Her instincts might have been spot on. This feels like a comfortable space in which Sophie can excel and make it — or not. I am probably being naive, but I really hope a spot for Sophie wasn’t pre-ordained the moment the coaches heard there was a girl with Down syndrome who wanted to try out. I hope that if she does make it, she’s not just a mascot, a warm fuzzy for everyone else. I hope she deserves a spot. And if she doesn’t, that she’s urged to try again next time.

I am cautiously optimistic after watching the coaches and girls encourage Sophie to run yesterday. I’m trying to feel that way about high school in general, but it’s too soon.

We’ll start with cheer. Final tryouts are Wednesday. As we drove home last night, Sophie admitted she’s nervous, sticking her forbidden thumb in her mouth. “I get it,” I told her. “But either way, I’m really proud of you for trying. Are you proud of yourself?”

She nodded silently, reaching her other hand out for mine.

I’ll let you know what happens.