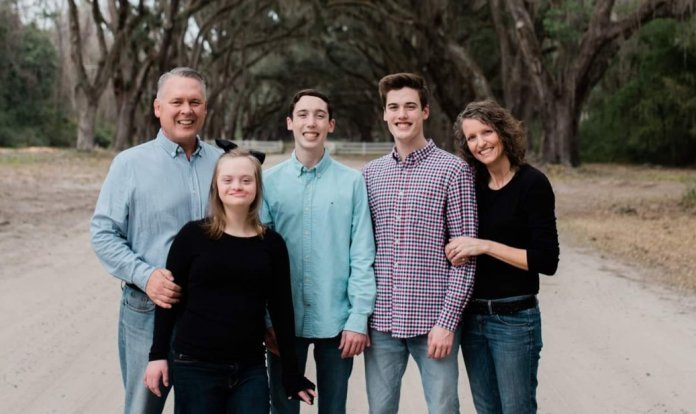 Georgia’s public schools are reopening this month even as COVID-19 continues its spread among people of all ages and some special needs families are facing tough choices between their children’s education and their health. Other parents say they haven’t been given any choice at all.

Lainey Bogardus of Effingham County is all set to start her freshman year of high school Wednesday. She is a typical teenage girl who loves watching videos, talking with her friends and singing along with her favorite songs. She also has Down syndrome, and that was a major factor in her parents’ decision, said her dad John Bogardus, president of the Lowcountry Down Syndrome Society.

“Children with Down syndrome, they have comorbidities that can make them susceptible to illnesses, and my daughter, it’s hard for her to keep a mask on,” John Bogardus said. “We have to talk to her when she’s in any public areas, you really have to stay on her, remind her of those things, keep her mask on and her hands out of her mouth.”

On the other hand, Lainey loves going to school, and being around other kids is good for her. She has friends in both special education and general education classes, and while she socializes with them, she’s learning skills she will use for the rest of her life.

“We want her to be a productive, normal person in society within her community group, and that’s with all different types of peers, not just kids that have Down syndrome,” Bogardus said.

In the end, the family decided to keep Lainey learning at home. They bought her a laptop and cleared out a spot for her to study, but they are leaving their options open for next semester.

Nearly 200,000 Georgia students received special education in 2019, according to the Georgia Department of Education. They represent more than 11% of the state’s K-12 enrollment, and they have a wide range of physical or intellectual differences that require special attention in a brick-and-mortar  classroom in a typical year.

Most of them are set to head back to class between early August and early September, either digitally or in-person.

Children who are categorized as “special needs” can include students at all intellectual and physical ability levels, and some are perfectly happy studying independently from home.

Count Jacob Thames among them. He is a 7th grader in Muscogee County, which is starting the year virtually. Jacob, who has autism, seemed to thrive last semester when school suddenly went online, said his mother Jaime Thames.

“He loved it,” she said. “He was fine with staying at home and working on the computer. We would come home and check his work, but we’d kind of leave it up to him. As long as he could sleep late and just do his work when it was OK for him, then he was fine.”

Jacob does well with a less structured schedule, and he seems content keeping up with his friends through online games, his mother said. The family plans on keeping him on virtual learning as long as it is a choice.

All special needs families are different, and they should be able to decide what type of learning is best for them, said Todd Hartle, who runs a nonprofit called Dads Appreciating Down Syndrome Atlanta for fathers of children with Down syndrome.

Many of the largest districts in the state, as well as some smaller, rural districts that have been hard-hit by COVID-19 are starting the year entirely virtually. One of those online-only districts is the Decatur City Schools, where Hartle’s 10-year-old son Wyatt is a student.

Wyatt has Down syndrome as well as speech apraxia, which makes talking difficult for him. One of the services he gets in school is speech therapy, and moving those sessions online was a challenge last semester, Hartle said.

“Sometimes it works, and other times he’s just going to lay his head down and not be a fan of it,” he said. “But it’s definitely one of those things that does work better in person because the teacher can use their hands and show him mouth shapes and so forth. That works better in person than video.”

Hartle started a petition calling on Gov. Brian Kemp to mandate the option for in-person learning for special education classes in Georgia. As of Thursday afternoon, it has received 2,700 signatures, many from parents of children with learning issues that make virtual schooling impossible.

“A lot of them are saying ‘my child won’t come to the computer,’” Hartle said. “Some children have one-on-one parapros that they get services from throughout the day, so obviously, that doesn’t work over video. They’re not sending staff into the homes. You have people that are transitioning not only grades, but to a different school, so they haven’t met a teacher yet, and it’s hard to develop that relationship when you’re meeting your teacher for the first time over video.”

Children who do well studying at home or who have medical conditions that make in-person schooling dangerous deserve the option of virtual learning, Hartle said. But there are many others who cannot learn without one-on-one instruction from trained professionals, and those children deserve an education too, he said.

Special needs students should be in school if possible, say the leaders of Forsyth County Schools, the largest district in the state offering both in-person and digital learning.

“We encourage families with children with disabilities to allow their child to attend school, so we may fully implement the students’ (individual education plan) as written to provide all needed services,” county officials said in a memo sent to parents.

Forsyth County parents of children with special needs will have the option to work with school staff to develop a contingency plan that will be active until the child returns to brick-and-mortal schooling. Each child will receive a case manager to provide support, but parents can still expect to play an active role.

“A critical component for a student to be successful in a virtual educational setting is that each student has proper adult supervision throughout the school day,” the memo says. “A teacher is not physically able to provide supervision in a virtual educational environment, therefore there must be a dedicated adult performing that supervisory role when a student is enrolled in the virtual environment.”

For school districts, the choice between going fully digital or also offering face-to-face instruction can be very complicated, said Christy Calbos, an Atlanta-based special education attorney who represents special needs families in districts around the state.

All children with special needs are guaranteed by law a free and appropriate public education, or FAPE, but districts that offer a choice of face-to-face or virtual learning will not have the same obligation to provide that education to children who study online, Calbos said.

That means that in districts like Effingham, Forsyth and Cherokee, children with special needs who attend school virtually are not guaranteed the same accommodation as their classmates who are studying in-person, Calbos said. “A mom hired me today to represent her child, and she said ‘Christy, I work full time. My husband works full time. We’ve got to be in our offices in our home from nine to five. I can’t get him logged in. He’ll walk away if I don’t sit next to him six hours a day. I need someone in my home.’ I said, ‘Legally, you don’t have the right to do that, unless the district goes what we call universal.’”

“The districts are trying to think ‘what the heck are we supposed to do here with this deaf-blind child or this child who tears up the laptop or smashes it or cries or has a tantrum or punches their parent every time we try to log on digitally?” she said.

Originally seem in The Georgia Recorder is an independent, nonprofit news organization focused on connecting public policies to the stories of the people and communities affected by them. We bring a fresh perspective to coverage of the state’s biggest issues from our perch near the Capitol in downtown Atlanta. We view news as a vital community service and believe that government accountability and transparency are valued by all Georgians.

PHOTO ABOVE: The Bogardus family. From left, John, Lainey, Mason, Charlie and Candy Bogardus. Lainey will be starting high school Wednesday, and having her begin online was not an easy choice for the family. Photo courtesy of John Bogardus