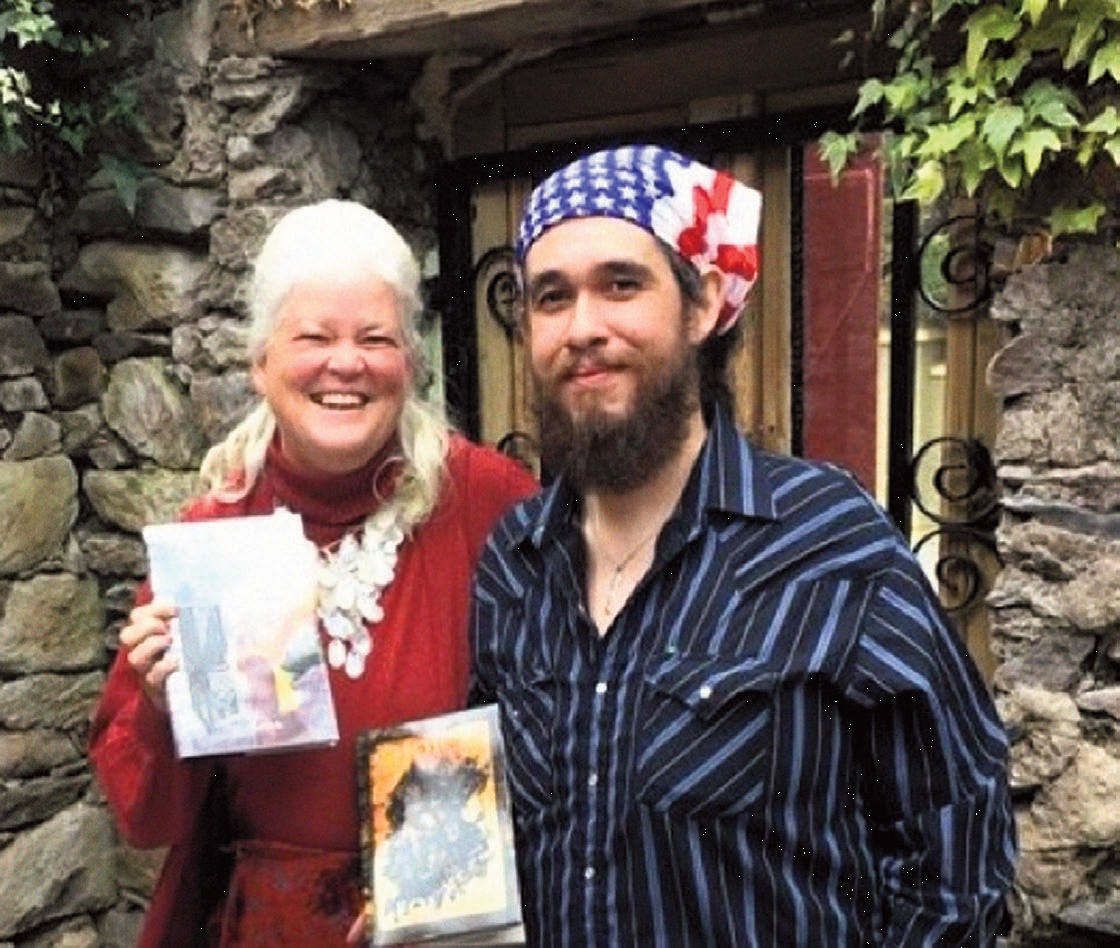 The Nigerian proverb “It takes a whole village to raise a child” says it all, especially for those of us raising children with special needs.

Back in the 1980s, our village took a chance and reached out. My son learned to believe; although still physically challenged, he now is capable of living independently and has become a talented artist and owner of an international art corporation.

He is 30 years old now, my son Travis. He is also the Chief Executive Officer of his own international company and the talented artist/illustrator of a series of fictional novels I write called The Jewel Chronicles.

This young, successful adult was at birth given two hours to live, then two days which became two weeks, two months, and finally evolved into a maximum life expectancy of two years. I can still remember when he turned three years old and the local fire department threw a city-wide birthday party to celebrate his landmark survival. Of course, we had the fire trucks, water hoses, birthday cake and ice cream with all the local children enjoying the party and the tour of the fire station. The highlight of the party, though, was when the small black and white puppy ran through the crowded room to jump squarely into Travis’ lap, giving kisses, wiggles and joyful yelps of happiness to the young child who was quadriplegic.

The firemen had made a point of first meeting with Travis’ pediatrician, the city veterinarian, and myself before reaching out to animal shelters across the state to find the perfect companion for my son. Needless to say, it had to be at least a Dalmatian mix. The veterinarian had nixed the idea of a full-blood Dalmatian due to Travis’ specific physical challenges. He had recommended a Dalmatian/Labrador mix, blending the majestic traits of the Dalmatian with the child-friendly personality of a Lab, and the firemen exhausted all efforts to find such a miracle puppy to celebrate this landmark birthday. In between massive puppy kisses, Travis declared to all present the pup’s new name – Sky! It was a child’s perspective, when the pup stood, he was as black as the night sky. But when he rolled over for belly rubs, he was as white as snow with the trademark black Dalmatian spots. That day was a joyous day, the laughter, love, and community support we found that day carried us through some of the toughest years of our life.

As for Sky, she proved to be a life saver, literally! In addition to being quadriplegic, Travis suffered from sleep apnea; a condition that causes the individual to stop breathing when asleep. He hated the hospital equipment he was forced to wear that would breathe for him at night and would often tear it off in frustration and tears after going to bed. I began to sleep on the floor next to his bed to insure he  continued to breathe through the nights. The previous Christmas, a local radio station had heard about this situation and had donated a custom bed that raised Travis’ bed just enough to allow for a roll-a-away bed to fit underneath. At bed time, I merely rolled the bed out from underneath his, and no longer was forced to sleep on the floor. Then Sky came into our lives. The first night home, she joyfully jumped into bed and snuggled close to Travis. When he stopped breathing that night, before I could jump up to pull my child close and help him regain his breath, the small pup had already leapt to his chest and was rapidly licking his face. The unexpected activity startled my son awake and he was able to regain his breath on his own. This became a nightly ritual as the two lay together in bed. The hated hospital machine was put away and Sky became his nightly life saver for the next 15 years and I was eventually able to safely retire to my own room at night, knowing full well that Sky had it all under control.

The largest frustrations I encountered were those faced by many families of children with special needs. The stress of dealing with a child who is terminally ill played havoc with our family relationships; his father and I separated shortly after his birth, while some members of my family rallied behind us and others distanced themselves, not knowing what to say or how to act in our presence. Strangely, it seemed easier for the community of strangers to come together on our behalf than it did for those closest to us. We became entrenched in daily medical appointments, therapies, emergency room treatments. Time after time I listened to medical professionals cautioning me not to build up my hopes, family members advising me not to become too close for I would lose all when Travis died. Social workers provided counseling and hospice information, neighbors offering friendly and concerned advice, fellow parents providing comparisons and stories of other families. It got to the point I wanted to grab a megaphone and loudly proclaim to all, “Please do not bury my son until he is dead!” I would lock myself in the bathroom at night after my son fell asleep and cry until I collapsed on the floor weak and exhausted.

Then one sunny day a young college student who lived down the street knocked on my door and told me to “take the day off.” She and her friends were taking Travis and Sky to the beach for the day, and a local spa was treating me to a special “me” day of my own. I was stunned, speechless. By the end of the day, I had returned a different person and my son had found new friends, college kids from the local  university, who came regularly to treat he and his dog to a day away from mom. Am I recommending a day at a spa will make it all better? Obviously not, but it certainly won’t hurt! What I am recommending is to take advantage of the respite services offered in your community; allow your children the right to live their own lives without you hovering over them every second. It will build their self-confidence and their perceptions of self-worth. Allow your community to step in and help; if need be, actively seek out activities and services available to you. Unfortunately, in America, we have lost the Old World values of the small villages of yesteryear. We stick to ourselves, rarely even speak to our neighbors. Many times it is due to fear, sometimes it is merely the stress of everyday life does not lend to leisurely chats over the fence. Sadly, it is not because we don’t care. I am a living example of how much we Americans truly can care; how much we will give to help another, especially someone in which we have something in common –such as living in the same community.

What was the outcome of all the little things my community did for myself and my son? What was the eventual result of me begging the medical world not to bury my son before he was dead? What did the support of all those college kids do for us through the years?

I was encouraged to return to college where I earned a degree in Political Science and a Masters Degree in Counseling and Education. My family and dozens of college students voluntarily took turns taking care of Travis so I could go to school and work full time towards a career. The medical professionals banded together, determined to help Travis survive and live a healthy, productive life; not just endure and control symptoms until he died. A local swim coach donated his time to teach Travis to swim, working with him from the age of two months old and building him into a Special Olympics gold medal winner at a young age . This resulted in Travis learning to believe in himself and believe he could overcome anything. His friendships with the college students taught him that, although different from others, he had something to contribute to society and was valuable to all. The support we received from all those in our “village” encouraged us to automatically reach out and help others in need; we learned to “pay it forward.”

Life has not been easy on us, I’ll be honest with you. It has been filled with pain and setbacks and delays. We have made scores of mistakes over the years. There have been many more nights I have cried in a locked bathroom over the decades. It is a struggle; it will continue to be challenging. However, because we have learned that it truly takes a village, we have willingly opened our doors and our hearts to those around us. We have learned to graciously accept help when it is offered just as we are often the first to offer help to others around us.

Back in the 1980s, our village took a chance and reached out. As a result, I took a chance to believe in a future for my son and me. This belief, in turn, led me to a career that has taken my son and I all over the World, where we found other villages and neighbors offering their hearts, love and expertise to help. In turn, my son learned to believe; although still physically challenged, he now is capable of living independently and has become a talented artist and owner of an international art corporation. In my retirement, the two of us have partnered to author and illustrate suspense novels which are based on our global travels. We have purchased a century-old farm on the Wild Atlantic Way in County Kerry, Ireland, where we will open an art gallery and eventually design and build a 4D theatre which will allow special needs and physically challenged individuals the ability to experience the wonders and thrills of Ireland, from their castles to the recent home of Star Wars, Skellig Michael, to the simple thrills of an Irish coastline.

So you ask, “What can I do for my child born with special needs?” You can believe, believe in your child, believe in their future, in your future, in yourself. Listen to your child’s desires, their hopes, their dreams, their fears. Face them together, not alone locked in your house; together with their medical professionals, their teachers, their friends, their community.

“It takes a whole village to raise a child.” Fact or fiction? Take it from an author who writes fiction, it’s a fact! Believe, accept, and pay it forward. No matter what the ultimate outcome, it will be worth it! •

ABOUT THE AUTHOR:
Eolane and her son Travis write/illustrate a fictional suspense series based on their life travels titled The Jewel Chronicles. The first of the novels, Whisper in the Wind, was successfully released last year. The latest novel, Choices, has just been released for publication and a new novel is now underway. You can purchase the suspense novels online at Amazon, Barnes & Noble or via the author website: www.Eolane.Global