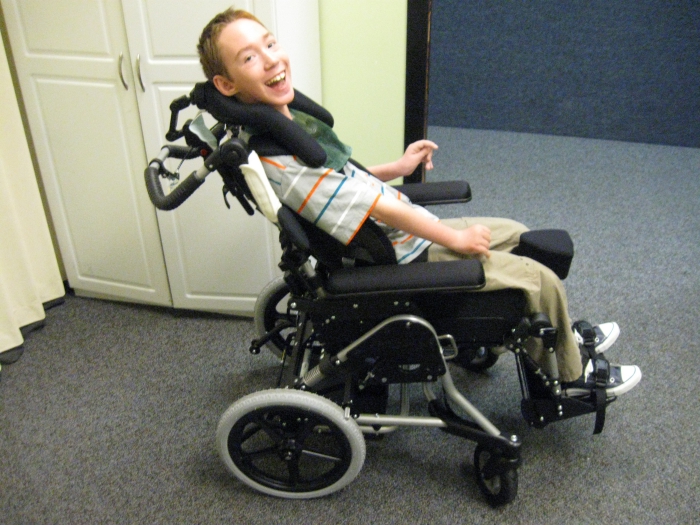 One disadvantage of wheelchair seating is that it doesn’t move. As a result, the child doesn’t move – unless they move out of an optimal position. Lack of movement leaves the child in a static sitting position for extended periods of time. This can lead to range of motion losses, increased pressure, agitation, fatigue, and discomfort. Movement, on the other hand, can decrease agitation, increase alertness, provide sensory stimulation, relieve pressure, provide active range of motion at joints, and make the child more comfortable. Children who can move in their seating system are more likely to tolerate sitting longer.

What is dynamic seating?

Dynamic seating is movement that occurs within the seat and/or wheelchair frame in response to force from the child. Dynamic components absorb force which, in turn, assists the child back to a starting position (see figures 1 and 2) 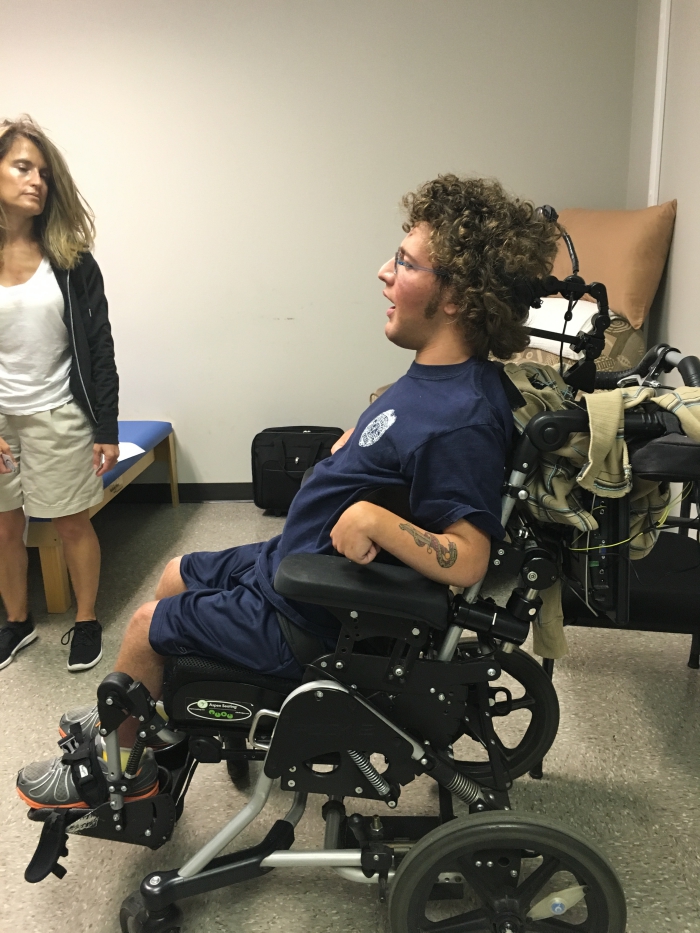 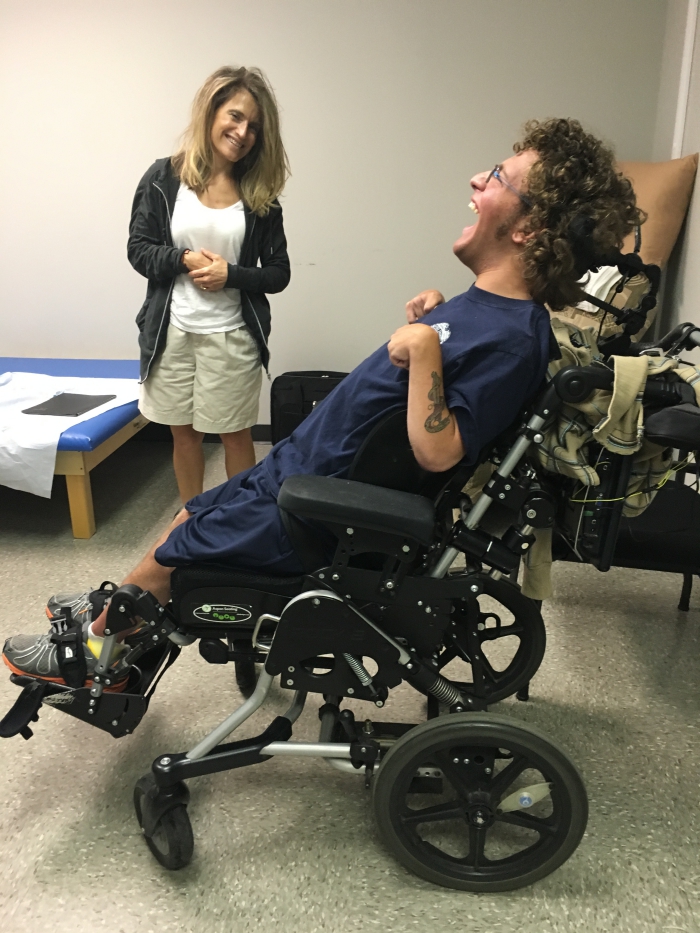 Who can benefit from dynamic seating options?

Dynamic seating is often used with children who have increased muscle tone. The dynamic seating components absorb extensor forces that could otherwise lead to client injury, equipment breakage, decreased sitting tolerance, increased agitation, decreased function, further increases in extension, and quite a bit of energy exertion. Dynamic seating is also used with children who seek out movement. As such, children with cerebral palsy, traumatic brain injury, and developmental disabilities often benefit from this intervention.

When a child exerts enough force against their seating system to cause breakage, the child is at risk of injury. For example, if the child has broken the head support and/or mount, enough force has been generated to potentially cause a concussion. Dynamic seating components can absorb and diffuse this force.

Daniel is a 15 year old young man with the diagnosis of cerebral palsy and seizures. Daniel has high tone in his extremities andlow tone in his trunk and neck. His tone is so extreme that he has broken components of his wheelchair frame in the past, as well as dislocated both of his elbows and ruptured both patellae (knee caps).

Over the years, Daniel has used different types of seating systems, as well as manual wheelchair bases. Despite trying a wide variety of options, it was difficult to maintain Daniel’s position in the wheelchair and he continued to “fight” against the seating throughout the day. We trialed a manual wheelchair with dynamic seating when Daniel was 12 years old as we hoped to diffuse his muscle tone by allowing movement of the seating system in response to Daniel’s movement (see figure 3). In this wheelchair, Daniel was still extending quite a bit and when he relaxed, he tended to collapse due to low tone in his trunk and neck. Daniel continued to grow and was hitting puberty and we were concerned about him developing spinal curvatures. We recommended an orthotic molded seating system to provide adequate support. This is typically a one-piece system, however this was modified to work with the dynamic wheelchair, as the seat to back angle opened in response to Daniel’s extension. A dynamic component was added to the head support to absorb force behind the head, as well.

Daniel eventually outgrew this dynamic fitted wheelchair at age 14. The next size was too large for the family to manage. We tried a different dynamic back and dynamic footrests on a tilt in space manual wheelchair base. The dynamic back opened in response to Daniel’s extension, absorbing and diffusing force (see figure 4). Various elastomers are available, allowing us to provide the right amount of resistance. If the resistance was too “soft”, the back tended to open in response to the frame being tilted. If the resistance was too “hard”, Daniel’s extension did not activate the dynamic movement. The dynamic footrests elevate and telescope in response to Daniel’s extension and the footplates can move into a dorsi and plantar flexion position. Daniel did not require this last adjustment, as he wears AFOs and does not have active ankle movement as a result. The knee extension was set at a starting position of 60 degrees, which was what was required for Daniel. The footplates were also mounted in a position to accommodate his tibial torsion (his feet turn outward). Shoeholders were mounted on the footplates to maintain contact and activate the dynamic feature (see figure 5). 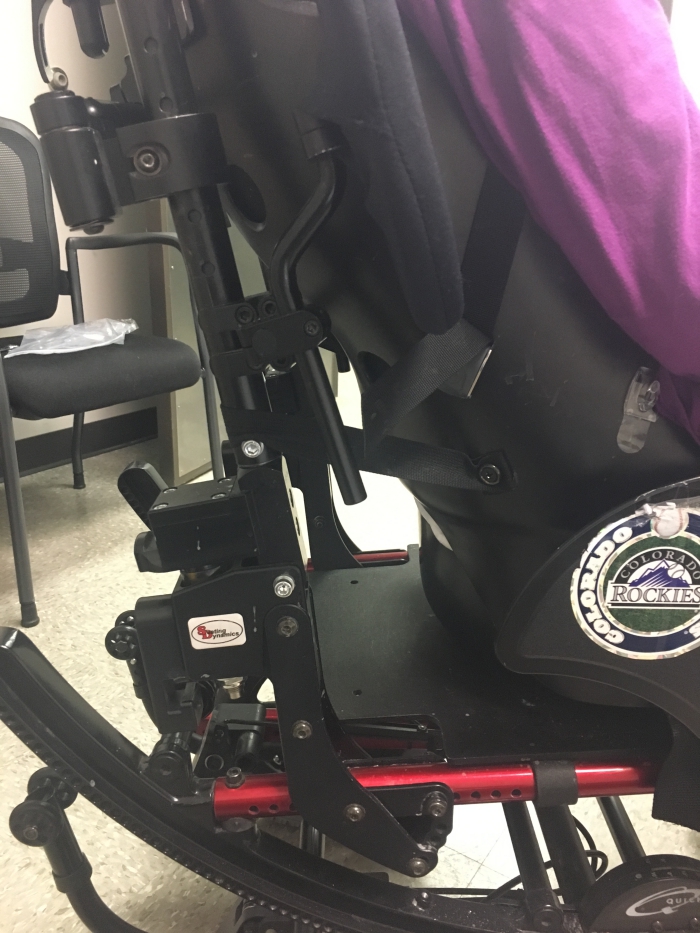 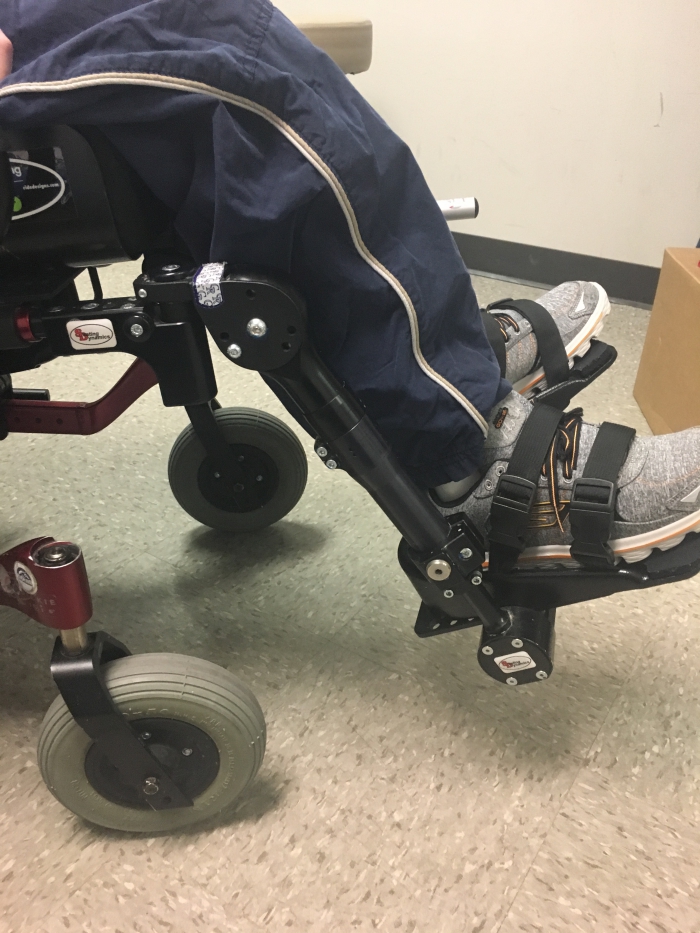 Using dynamic components has helped Daniel to better tolerate his seating system, to extend less, and be more functional. He no longer breaks anything on his wheelchair seat or frame either!

Does your child need to move? Talk to your wheelchair seating team about trying dynamic seating options. In most cases, this technology can be added to the current manual or power wheelchair. If the dynamic components are not moving, work with your team to ensure correct mounting and adjustment for optimal results. Your child will thank you!

Has dynamic seating made a difference for your child? I’d love to hear from you! Feel free to email me at MichelleLange1@outlook.com.