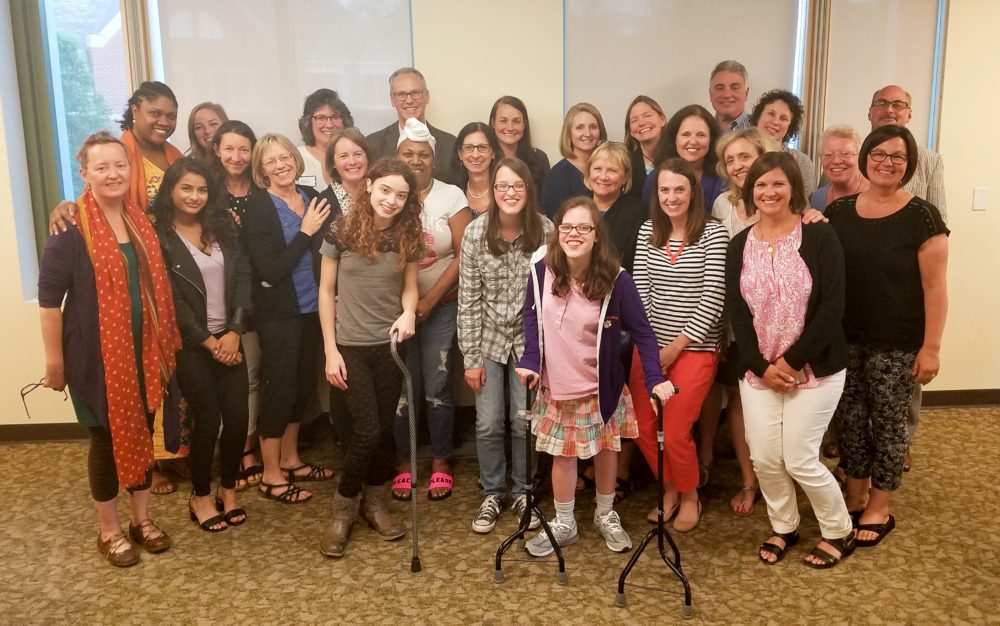 “Nothing About Us Without Us!” is a slogan used to communicate the idea that no policy should be decided by any representative without the full and direct participation of members of the group(s) affected by that policy.” It has been embraced by the disability community for decades.  Of all the myriad threads in the disability fabric I believe this slogan is best directed at medical research. The active participation of individuals impacted by research should always be a part of the research model, design and goals. EP salutes those parents and individuals who have been part of research programs that have provided inroads in quality of life outcomes. We are proud to provide this two part series on the experiences, insights and perspectives of participants in the On Track program.

This is the first of a two-part article about our experiences as parent members of the On Track Study research team. In this article we reflect on why we decided to participate as parent researchers and we share our initial expectations and experiences. Although many of our children had participated in research, being a parent research team member was a new experience for all of us; we did not know what to expect but were all very pleased that we took the journey.

We are a group of seven mothers of children/young adults with cerebral palsy (CP) who were invited to join the On Track study research team in 2013. The On Track study is a large collaboration involving researchers, therapists, families, and children with CP across Canada and the United States. Over 700 children and families participated in the study. Funded by the Canadian Institutes of Health Research (CIHR) and the US Patient-Centered Outcomes Research Institute (PCORI), the study will create developmental trajectories (similar to growth charts for height and weight) for children (age 1.5-12 years) with CP in several areas of development. The developmental trajectories are intended to assist families and service providers to monitor children’s development, identify goals and services, and plan for the future.

Why we decided to join the On Track Study research team

The possibility that our personal experiences might benefit other families and children with CP was a shared reason to join the On Track study research team. We also were curious about how research was done. We became involved to: make a change, have a voice, give back, learn, and provide hope for children with CP and their families.

“Since the day I gave birth to twin girls at 23 weeks gestation, watched one die from prematurity and watched the other spend many months and years under the care of multiple doctors for multiple issues, I have looked for ways to learn more, give back, and inform or impact this new norm I live in… When I was approached to be a part of the On Track study research team, I knew this was an opportunity to accomplish all of these goals.” (MG)

“I joined the On Track research team as a continuation of working with the previous Move & Play study, involving research institutions in the US and Canada. I was personally interested as a parent of a child (now an adult) with CP who has benefitted from knowledge and tools gained from research. I am committed to participating in research that is dedicated to advancing health and wellness for future children with CP and their families.” (th)

“When I was invited to join the On Track study research team, I really did not know what to expect. I did not have a comprehensive understanding of how the research process works and I was not familiar with parents playing a role in the research process. I only knew that our daughter had benefitted significantly from intensive physical therapy that started as soon as she came home from the NICU. Noelle has exceeded the expectations of all of her doctors and we believe that physical therapy has played a pivotal role. I was curious to learn more about the research process and was honored to participate with this group. I was also hoping that our experiences could help other families who have a child with CP.” (NF)

“The idea of being part of a research team interested me partly because I was curious about the research process (and was flattered to be invited to take part). A more fundamental reason was the awareness that my son’s diagnosis of CP was descriptive and not predictive. We (parents, therapists, MDs) just do not know enough about neurological injuries to be able to map out what life will be like after someone has such an injury. It’s especially true for CP since the injury is at birth and therefore affects all realms of human development. I hoped that the On Track study (Move & Play study before it) would help contribute to the field’s understanding of what kids with CP and their families can expect to happen.” (BT)

“My son was participating in the On Track study and I was invited to participate as a member of the parent panel by one of the investigators. The idea of collaborating with other parents, sharing our stories, and helping guide the research process to benefit our children intrigued me. Other studies my son participated in had not included parent participation in the research process.” (LD)

“I wanted to join the research team because I believe that any input on my part could be worth something to another parent.” (KR)

“I decided to join the On Track study research team due to the kind invitation of my son’s physical therapist. Her summons encouraged me to share the perspective of cerebral palsy from Dillard’s and our family’s point of view. My initial expectations included a sense of fulfilling an understanding of the endeavor before us and earnestly listening to others, especially the parents.” (PD)

Since we live across six regions of the US and Canada in three different time zones, monthly meetings occurred via teleconference. Only two of us (th and BT) had previously met, having participated as consultants in the Move & Play study. Although the academic researchers had worked together for many years, most of us had only met the academic researcher in our region. As might be expected, it took time for us to identify with our roles as researchers and how we might contribute to the study. Toward the end of the first year we become more comfortable sharing our perspectives. The process was made easier by our openness to each other’s thoughts and experiences and through encouragement by the academic researchers to share our ideas and make suggestions.

“When the project first started, I felt extremely inadequate. Since my child was the youngest in the group, there are so many things that I have yet to experience or figure out. Additionally, I often felt as though I was not doing enough… I have yet to find ways to expose my child to community activities with regularity… her school is an hour away, as are most of her classmates and the many locally integrated options we have tried have not been as ideal. For those reasons, I admired hearing what the other parents have done for their children and feel challenged to do more for mine.” (MG)

“My initial expectations (during Move & Play) were confirmed: that we would offer feedback on the work of the people I thought of as the ‘real’ researchers. As time went on, I was somewhat surprised – very happily so – that the research team expressed such strong interest in involving parents more deeply and in a more integrated role as collaborators. Parents know that no one knows your child as well as you do; but that is not always acknowledged. It is deeply validating to be part of a group that values a parent’s perspective, observations, and intuition.” (BT)

“I valued listening to the conversations between moms which allowed me to understand more fully about each family’s successes and challenges in navigating the best path for their child and family. While all our experiences were unique, it was clear we were all united in one purpose, that of advocating the best for our children.” (LD)

“At first I thought that what I said wouldn’t make a difference, but it did. Introducing things I that I do with my child to get him to fit in, or should I say to get others like family and friends to fit in his world.” (KR)

Our contributions initially included suggestions for enrollment of children and families in the study, clarity and acceptability of study measures, and addressing questions from therapists and parents participating in the study. We authored the Parent to Parent column in the Family Newsletter for study participants, and we developed an Exit Survey to complement the study measures. Several of us partnered with academic researchers to present at two national and one regional conference on involving families of children with developmental conditions in research.

Early on we identified a desire to create a resource for families. The themes emerged from discussions of what families want to know about the development of their children with CP. The medium we chose was short interactive videos. The entire parent team worked with Sarah Glenn from ProjectVideo Inc. on the script, selected the background music, and provided input for editing two 5-minute videos. The videos, Checking-up and Checking-in: Partnering with Families of Children with Cerebral Palsy and Creating the Future: Engaging Children with Cerebral Palsy in the Circle of Care feature three of our families.

In part two, we will share how our engagement evolved the past four years and potential benefits to including parents as members of the research team.