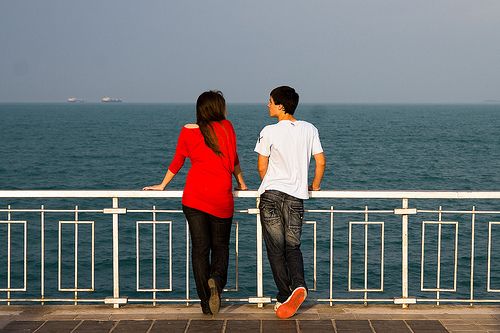 It is that time of year where love is on everyone’s mind. There are pink hearts, red roses, and chocolate practically everywhere. While there have been many advances in services designed to improve the lives of people with autism, one thing has been crucially missing: romance and dating. “Netflix recently released Love on the Spectrum,” a show which aims to spread awareness about some of the difficulties people with autism experience when pursuing a romantic relationship. While the show has spread awareness and brought attention, there is a need for more intervention and support programs to help individuals with autism to have the best chance at being successful in finding a romantic partner, and in dating in general.

One day, during a break at Saint Joseph’s University, I happened to overhear a conversation between two college students. I can’t recall the specific details, but part of the conversation went something like this.

“How are things with Alli?” – female student

“Oh, I see. How do you feel about that?” – female student

“And how about Julia?” – female student

“We went out and had lunch together a couple of times. We get along really well, but I’m not sure it’s a match. We’re more like close friends, and really like spending time with one another. I think we will keep doing that.” – male student

The female student continued, asking about various relationships with other women, and the young man’s thoughts on each of them. On the one hand, this was a pretty unremarkable conversation. It was two college age friends chatting about one’s romantic prospects. On the other hand, the conversation struck me quite directly because, even though I have spent a great deal of time around people with autism for over 20 years, I had never overheard a conversation about relationships like this one between a young man with autism and a female friend. It was a very “typical,” very natural conversation, on a topic of high relevance to college students. The female student was genuinely interested in her friend as an individual; as a person. She understood that he wanted to develop relationships, she respected him and his opinions, perspectives, and insights into his relationships, and she knew that he had something of true and serious value to offer a partner. She wasn’t a clinician trying to evaluate or help a person or “patient” in need, or talking down to him; she was a friend wanting her friend to be happy, and for him in turn to make someone else happy. This conversation seemed to me to reflect exactly the type of naturally occurring social and familial network support that research indicates facilitates people being successful in finding long-term romantic partners (https://www.pewsocialtrends.org/2020/08/20/nearly-half-of-u-s-adults-say-dating-has-gotten-harder-for-most-people-in-the-last-10-years).

Later that month, I just so happened to overhear another conversation. It was the same male student talking with a different female student. The conversation was different, but it felt very much the same. It was at this point that I realized some of the variables involved. First, this was a highly socially and intellectually capable young man with autism. Second, we were on one of the most autism and neurodiversity friendly university campuses in the country. So, I started to wonder how common these types of conversations are. In speaking with other college students with autism and the clinicians who serve them, it seems that these types of friend-to-friend conversations are happening for some on the spectrum, albeit not for others. The autism-friendly atmosphere of Saint Joseph’s University, coupled with the tendency for college students with autism to have stronger social and intellectual abilities, makes these types of meaningful conversations possible. However, it is well-documented that people with autism
struggle with both establishing and maintaining precisely the types of networks of friendship and interpersonal supports described here, so it seems safe to assume that many adolescents and young adults with autism may not have these types of close, stable, sincere, supportive relationships which they can use as a sounding board.

Existing dating support for people on the spectrum include the UCLA PEERS program, which is a brief, short term conceptual training and practice with dating strategies and dating related conversations (https://www.semel.ucla.edu/peers). Additionally, there is a newer online app, Hiki. This app was developed to help autistic people develop both platonic and romantic relationships with other autistic individuals (https://www.hikiapp.com/). These two recently developed supports have provided a great starting place for addressing the romance and dating desires and needs of people on the spectrum. Perhaps most importantly, they are light years ahead of the traditional approach to romance and dating for this population, which has very unfortunately had a strong tendency to focus on risk-avoidance and teaching adolescents and young adults with autism what NOT to do in order to avoid “getting into trouble” during real or perceived romantic or sexual advances.

Developing and maintaining the social and friendship networks which support success in dating and relationships can be a challenge for people with autism. But the example presented here indicates that these networks and friendships are possible in an environment that facilitates and supports mutual understanding, caring, and respect. In recognition of this, we have initiated a working group in the Kinney Center which includes undergraduate students with autism and their neurotypical peers. The goal of this working group is to expand and improve our understanding of the particular types of social network needs of individuals with autism specifically in relation to seeking out and succeeding in romantic relationships. Our ultimate aim is to foster the development of these critical networks not only for autistic college students
but also for a more diverse group of autistic adolescents and young adults in high schools, at other universities, and on various other training, work, and life paths.

As part of this initiative, we see great potential and significant need for neurotypical peers to evolve their thinking and increase their capacities and capabilities in order to be better and closer friends and partners for people on the spectrum. We also recognize that, while we aim to create new programs and supports to facilitate romantic relationships, there is a related need to treat each person with autism as a person, and not a diagnosis, like in the friendship interactions described in this story. Finally, we feel that the distinction between a program to establish and maintain healthy and supportive friendships and other relationships specifically to facilitate understanding of dating and relationships, as opposed to a program designed to teach autistic people how to perform better on a date, will give the people with autism not only critical and on-going interpersonal and emotional support but also the compassion and respect that they deserve and need in order to thrive and succeed in achieving their interpersonal relationship goals. Like the characters in this story, we raise our expectations and offer our hands out with confidence in our friends on the autism spectrum.