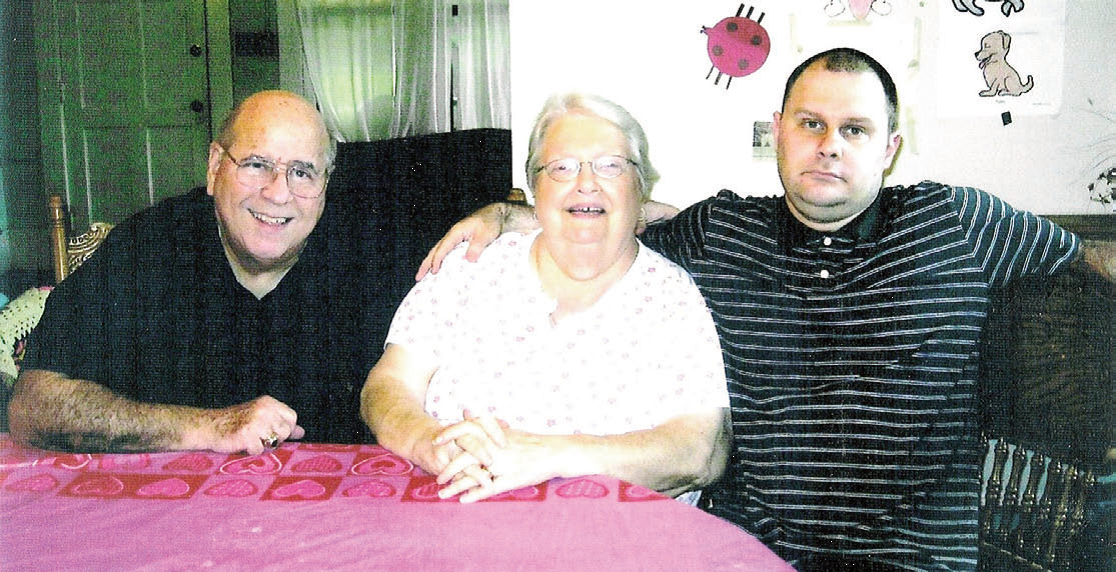 With 18 communities consisting of one or more homes in the United States, L’Arche provides support for daily living and a community of belonging where people with and without intellectual disabilities share their lives together.

When Donna and Manny Ganzarain were told their fouryear-old son Mark was autistic, Donna was confused. It was 1976, and she had never heard the word. She thought the doctors were telling her Mark was artistic. But when Manny’s brother heard the diagnosis he told them about a place he had visited in a small French village. It was called L’Arche – which rhymes with “marsh” and means the ark – and it was a place where people with and without intellectual disabilities lived together as peers. He had met the founder, Jean Vanier, and told them that if the L’Arche homes in the United States were anything like what he’d seen in France, it was the place for Mark.

“At that time we were puzzled by everything and everything scared us,” Donna said. It was far too early to start thinking about where Mark would live as an adult. They just needed to know how to handle the day-to-day challenges they faced.

When Mark was 16, the Ganzarain family moved from New Orleans to Mobile, Alabama. There was a L’Arche community there, and when Jean Vanier came to speak at a local church, Donna went to hear him.

Jean hadn’t set out to start an international organization. He had simply responded with compassion when he visited the French institutions of the early 1960s, where people who had intellectual disabilities were sent to be forgotten. There he saw 80 men living together in dormitories made of concrete blocks with high walls surrounding them. The men had no work; they spent their days walking in circles. Vanier was struck by the anguish and sadness he saw there, but he also sensed God’s presence.

It was there that he met Raphaël Simi and Philippe Seux. In 1964, Jean asked for help from his family and friends to buy a small home and invited Raphaël and Philippe to move in with him.

“All I wanted was to create a community of which they would be the center and give them a family, a place of belonging where all aspects of their beings could grow,” Jean writes in An Ark for the Poor, one of 30 books he has written about L’Arche in the past 50 years.

And so the term “core member” was coined to describe the people who had intellectual disabilities and around whom the home and community was formed. Those without intellectual disabilities were called “assistants.” There were no “residents” because everyone resided together under one roof, sharing meals and household responsibilities, having fun, and finding small ways to show one another their love.

From their life together emerged a radical way of thinking about disability altogether. The most vulnerable people who had at times been regarded as a burden, became teachers and mentors, sharing their wisdom, welcome, sense of humor, and a whole host of other talents that might not have otherwise been discovered.

When word got out about this unique new way of living, others were quick to try it. Within five years, L’Arche communities were begun in North America and India.

Today, a total of 147 L’Arche communities can be found in 35 countries on all six habitable continents. L’Arche USA consists of 18 communities in both rural and urban settings, and each community consists of one or more homes – and in some cases a day program – where people with and without intellectual disabilities share their lives together.

L’Arche communities are communities of faith, with spiritual practices that reflect the traditions of their members. The L’Arche charter states: “Each community member is encouraged to discover and deepen his or her spiritual life [including those who have no religious affiliation] and live it according to his or her particular faith and tradition.”

The focus on the dignity and value of each person, along with loving relationships with assistants, is what many parents say makes L’Arche so special.

Cheryl Fannin, whose son Lance lives in L’Arche Heartland (Overland Park, Kan.) says the level of commitment and involvement of L’Arche assistants is different from a group home where staff come in for eight-hour shifts. “They’ve held out for his highest good. They try different things and he’s continued to grow. Where I might have looked at him and thought this is all you can do – they see he can do more.”

Indeed, this is what Jean Vanier had in mind. He writes that an assistant’s role is like that of a midwife: to bring forth and help foster life, to let it develop and grow according to its own natural rhythm. Assistants in L’Arche are not there to make people with disabilities somehow “normal,” but to help them grow toward maturity.

Cheryl isn’t the only parent who has noticed the assistants. Susan Englemann’s 27-year-old daughter Sarah also lives in L’Arche Heartland.

“It becomes clearer and clearer to me all the time that Jean Vanier’s vision of inviting people to move in to his house to live with them instead of to take care of them is what makes L’Arche different,” Susan said.

The assistants who live with Sarah are also in their 20s, and Susan sees that they truly want to be in relationship with Sarah. They live as any other 20-something housemates, collaborating on decision-making, sharing responsibilities, and having fun together. They celebrate, but don’t coddle her.

Not all L’Arche assistants come straight out of college. Others come later in life when looking for new direction. They come from every academic field imaginable, from social work to mathematics, philosophy to economics, English to political science. Their faith traditions and political views are equally varied. Yet they all come with an open heart and willingness to develop relationships with adults who have intellectual disabilities.

Once they arrive in L’Arche, assistants receive training specific to the community and home they will be supporting. Support is tailored to each core person and often evolves over time as needs change. Assistants learn how to properly give medication, assist with physical therapy and personal hygiene, implement behavior support plans, and prepare foods for a variety of dietary needs. And, because L’Arche is a licensed provider, it is all carefully overseen by outside case managers.

When Vanessa Hair’s 27-year-old daughter Kendyl wanted to move to L’Arche Tahoma Hope (Tacoma, Wash.), Vanessa was scared. “Not only was I losing the ability to care for her on a dayto-
day basis, I was placing my deaf daughter into an environment where no one knew how to sign,” Vanessa said. “The caring environment and celebration of core members’ gifts was the intrinsic
piece that allowed me to trust.”

Less than two years later, Vanessa knows that trust was well placed. Assistants learned to communicate with Kendyl, and her definition of family now includes members of the L’Arche community.

This sense of community was what Janice Anton felt her son John was missing prior to coming to L’Arche Boston North two years ago. He lived alone or with a roommate, and while his neighbors
and landlords were always kind, she worried about him being isolated. “He might not have admitted to loneliness,” Janice said, “But he certainly experienced it.”

Now, Janice knows John has a community that will be there for him when she’s gone. Donna, Manny, and Mark Ganzarain observed all this at L’Arche Mobile when they began visiting the community for meals every month or so. But every time they visited, their friend and core member Harry reminded them there were no rooms available.

Because core members experience such excellent care and enjoy a high quality of life it is rare for L’Arche homes to have openings. Each community’s process of welcoming a new core member varies based on local funding and regulations but, typically, involves a process of discernment about the potential core person’s desire to be part of a community. It often starts slowly, with visits and an overnight or two to determine whether it will be a good fit for everyone.

For Mark, the timing was right when he was 42. For 15 years, Harry told him there were no rooms. Then, Harry passed away. Through conversations with L’Arche Mobile’s executive director, Marty O’Malley, the family decided it was time for Mark to make L’Arche his home.

Donna went home and cried. After years of caring for Mark it was a big change for her, but she quickly began to see him grow and change.

“We found out that we were smothering him,” Donna said. “He needed to move forward, and when he moved forward – oh, things changed for him.”

Previously, Mark wouldn’t even sit at the table with others at mealtime. Now, Donna says, he plans the menu, says the blessing, and even goes to restaurants. She feels like a mother bird who pushed her baby out of the nest so he could fly.

ABOUT THE AUTHOR:
Bethany Keener is communications manager for L’Arche USA. For more information visit www.larcheusa.org