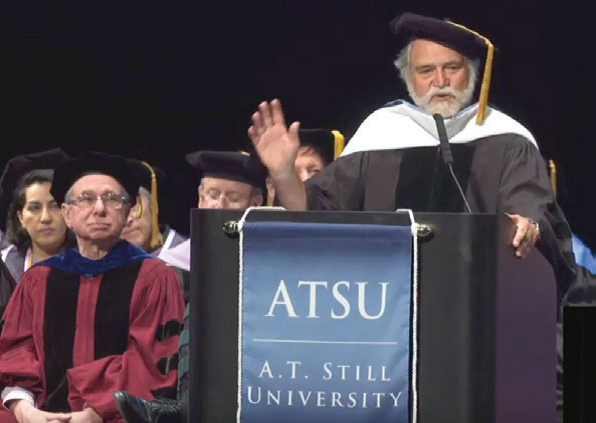 If my work in the disability arena over the last 20 odd years is deserving of an honorary doctorate
from this respected medical-dental university, the honor belongs to the disability community.

My stock has just risen to new heights.

I now have something in common with the Dalai Lama, the spiritual leader of Tibet; Nelson Mandela, the leader of the movement that defeated apartheid in South Africa; Sir Winston Churchill, the charismatic Prime Minister of Britain who helped win World War II; Sir Alexander Fleming, the discoverer of penicillin; and Elie Wiesel, the Holocaust survivor and Nobel Prize winner. Not a bad lot for one to have something in common.

Don’t even try to connect us; there are simply too many differences and distinctions to even begin to tie a thread between us…not to mention that admittedly I’m not worthy to carry the water for any one of them.

I hate to see readers of this column, “Ancora Imparo“ (I am still learning) throw up the white flag, so I will provide you with another clue. Add Lionel Woodville to the above list of notables. Got it?

Perhaps some insider trading information will end the head scratching.

Zachary Crockett, writing in Priceonomics, helps us to understand why Woodville is a member of the above elite group. “In 1478, representatives from England’s Oxford University approached a young bishop named Lionel Woodville. At the time, Woodville was a man of great honor: he was not only the head of the Cathedral Church of Saint Peter, but enjoyed the distinction of being King Edward IV’s brother-in-law. Well connected, wealthy, and of noble standing, he was just the kind of man that Oxford wanted to curry favor with.”

So it seems that Oxford dispatches an elegantly dressed courier to Woodville and presents him with a doctorate degree. Forget the fact that Woodville was excused from meeting Oxford’s strict academic requirements. The “goat skin” provided Woodville with an automatic modern-day equivalent of a Ph.D. This was history’s first “honorary” degree.

This was obviously a strategy to pave the way for Oxford to gain some favor and influence. It proved to be successful as Woodville was then offered, and accepted, the position as the Chancellor of the University. One can only imagine the dividends that Oxford enjoyed with the issuance of that honorary degree. Brothers in-law often are influenced by their wives, even when they are English kings. It was a proven “influencer,” and throughout the 16th and 17th century, hundreds of members of the noble elite were given similar degrees.

So that’s the tie-in. Fleming, Churchill, Wiesel, Nelson, Lama and I have all been bestowed with honorary doctorates. The honor, a Doctorate in Humane Letters, was given to me at the commencement ceremony at the Arizona School of Dentistry and Oral Health of the A. T. Still University of the Health Sciences. It was a great honor for me, especially when it was brought to my attention that I wasn’t the brother-in-law of any royalty; and that the governing body of the university thought I genuinely was deserving of the honor.

The honorary degree, while sounding impressive is even more so in its original Latin nomenclature, honoris causa, “for the sake of the honor.”

Getting an honorary degree is a lot like being a grandparent. Most grandparents would describe their role as having all the wonderful attributes, all the joys, the privileges and loving attention without the endless burden and  responsibility of issuing discipline, authority, rules, chores and limiting Moonpies and fried Twinkies. It’s sheer pleasure and enjoyment.

The honorary degree is presented to the candidate and the university waives the usual requirements, such as matriculation, residence, a dissertation and the passing of comprehensive examinations.

While the group I named in the opening of this column (and unashamedly added my name) earned international admiration, respect and acclaim for their achievements and were worthy of being awarded honorary doctorates, there has been at least one recipient that had trouble making it to the podium to deliver his commencement address.

In 1996, Southampton College of Long Island University awarded an Honorary Doctorate of Amphibious Letters to Muppet Kermit the Frog. Although some students complained about awarding a degree to a frog, after he was carried to the podium he delivered an enjoyable address. The college newspaper, The Southampton College News reported that “The degree was conferred in recognition of efforts in the area of environmentalism. His theme song, ‘It’s Not Easy Bein’ Green,’ has become a rallying cry of the environmental movement. Kermit has used his celebrity to spread positive messages in public service announcements for the National Wildlife Federation, National Park Service, the Better world Society, and others.”

If my work in the disability arena over the last 20 odd years is deserving of an honorary doctorate from this respected medical-dental university, the honor belongs to the disability community. They have provided me with the privilege and opportunity to move some anthills and fill some ditches that may have provided a more level playing field for individuals, families and professionals looking for inroads to inclusion and acceptance. To Exceptional Parent magazine, The Orange Grove Center, Special Olympics and the American Academy of Developmental Medicine and Dentistry I offer them honoris causa, “for the sake of the honor.” •