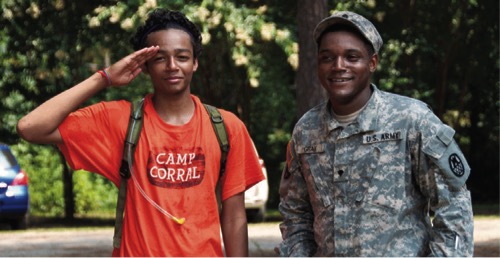 In this role, Brown will lead the organization’s fundraising efforts, with a primary goal to provide more military children with the opportunity of a lifetime. Since its inception in 2011, Camp Corral has provided a free week of summer camp to more than 17,000 children of wounded, injured, ill or fallen military veterans around the nation.

Brown brings a combined 30 years of experience in overseeing camp programs and fundraising to the position. Most recently, she served as director of stewardship and prospect research at the YMCA of the Triangle, Camp Sea Gull and Camp Seafarer. Prior to joining the YMCA, she held various leadership positions in student and academic services at Cornell University.

“We’re excited for the wealth of talent and knowledge Lisa brings to Camp Corral,” said CEO Leigh Longino. “Her professional background coupled with her experience as a military spouse and mother of two makes her a great champion of our mission to transform the lives of children of wounded, injured, ill, and fallen military heroes.”

“I look forward to leveraging my professional and personal experiences to enhance the development efforts of Camp Corral,” said Brown. “Camp Corral provides a meaningful opportunity to military children and I will work diligently to extend the opportunity to more of our nation’s young heroes”

Camp Corral, a 501 (c) (3) tax-exempt, nonprofit corporation, provides free, one-of-a-kind summer camp experiences for children of wounded, injured, ill or fallen service members. Since its founding in 2011 by Golden Corral, Camp Corral has grown to 22 camps in 19 states and has served 17,000 children. Although any child ages 8 to 15 from a military family is eligible, registration priority is given to children of wounded, injured, ill or fallen military service members.