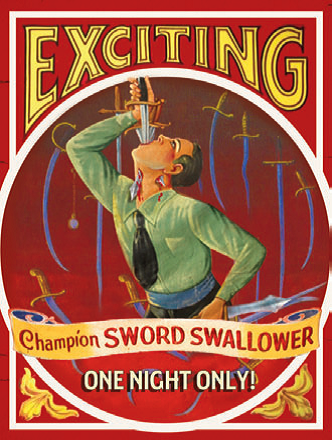 “For one hundred years (1840-1940) the freak show was one of America’s most popular forms of entertainment. Today the same shows would be considered unacceptable and cruel, or as one disability rights activist put it, “the pornography of disability.”1

“‘Freaks’ are public images manufactured by the disabled people themselves and/or their promoters for the purpose of fame and fortune… Human oddities would have carefully posed photos taken and often order thousands of reproductions. These ‘carte de visites’ were widely collected by Americans and made quite a bit of money for the ‘freaks’ and the owners of freak shows.” 1

Let’s be honest. As a child in the 1940s, one of us (HBW) looked forward each year to the arrival of the circus in Madison Square Garden in New York City – not because of the elephants, clowns, The Flying Wallendas on the high wire and the rest of the three ring shows – it was the “modern day side show, the freak show” that drew his attention and caused the excitement.

SOME HISTORY
“In England and the US in the 19th century… sideshows, or freak shows as they are sometimes referred to, contained arious forms of entertainment in one evening. Ten in One shows displayed 10 freaks on a platform in front of an audience, as people slowly walked past them. Every now and then, a magician would be thrown into the mix to give the crowd a brief respite from some of the more unsettling abnormalities they were witnessing. However, not all performers were “natural” freaks born with physical deformities. Some were performance artists who had unusual talents, such as fire eating, sword swallowing or full-body tattoos.” 2

Some shows were regarded as inappropriate for women and children and were categorized as “men only” performances. These often included the display of exotic or unnatural objects, such as “pickled punks” which were abnormal fetuses preserved in glass jars.

Small American freak shows first started to spring up in 1829, around the time of the arrival of Chang and Eng, the original Siamese twins; American sideshows began hitting its stride in the 1840s. In 1844, American circus pioneer and entertainment business manager, P.T. Barnum, traveled to England with his latest sensation, General Tom Thumb, who was 25 inches in height. Born Charles Stratton, Tom Thumb was Barnum’s distant cousin and most recent success story. Barnum trained Stratton in the arts, teaching the young boy how to sing, dance and impersonate famous historical figures. Once Stratton was properly groomed for a life in the public eye, Barnum gave him the stage name of General Tom Thumb.2

“In an age where scientific reasoning started overshadowing traditional religious values and medicinal advancements claimed stories of miraculous and life-saving surgeries, freak shows introduced the average layman to medicine and science, while enthralling them with tales of exotic locales and mysterious people discovered via colonial expansion.2

In the 1840s, activist Dorothea Dix lobbied for better living conditions for individuals with varied mental conditions after witnessing the dangerous and unhealthy conditions in which many patients lived. Over a 40-year period, Dix successfully persuaded the U.S. government to fund the building of 32 state hospitals for care of these patients, as well as individuals with intellectual disabilities. In the early years of the 20th century, a rise in disability rights movements inspired people to turn against sideshows and what was deemed as exploitation of individuals with disabilities by parading them and claiming it was just entertainment.

THE END OF THE SHOW
Advances in medicine brought with it actual clinical diagnoses of the conditions faced by many of the freaks. As a result, sideshows began losing their appeal as their physical or medical conditions were no longer thought of as miraculous or entirely unique. Some even stayed away from sideshows for fear of catching the freaks’ “diseases”. Unable to land proper jobs and unwilling to fade quietly into the background without any money, freaks took to performing in traveling carnivals and museums for small amounts of cash.3

By the mid-1950s, a drive for deinstitutionalization and outpatient treatment began in many countries, facilitated by the development of a variety of antipsychotic drugs. Deinstitutionalization efforts reflected a largely international movement to reform the “asylum-based” mental health care system and move toward community-oriented care, based on the belief that these patients would have a higher quality of life if assimilated and treated in their communities rather than in “large, undifferentiated, and isolated mental hospitals.”3

IT’S NOW THE MAIN STAGE
Individuals with intellectual and/or physical disabilities are no longer “The Side Show”.
• 56 million U.S. residents have one or more disabilities.
• Almost 40 million residents have a severe disability.
• More than 11 million children less than 18 years have special health care needs. Almost one-in-four of U.S. households have at least one child with special needs.5,6

Individuals with disabilities can lead productive lives. They are part of our everyday lives; in our schools, our malls, our offices, factories and the general workforce. They are our children, our husbands and wives, our parents and our friends. We have learned that words about them can be hateful.

“Blind, deaf, dumb, insane, crazy, handicapped. Daft. Psychotic. Special needs.” 7
“These words are flung around so often, and in such ill-advised and misappropriated ways, it’s easy to forget what they were actually intended to depict: people with ranges of physical, intellectual, cognitive, mental and other disabilities.” 7,8

We also have come to understand and face the reality that for many individuals with disabilities there are inadequate financial resources and numbers of providers trained and/or willing to provide needed services.

EVEN POLITICIANS HAVE DISABILITIES
The era of the 1940s side show (which attracted one of us to the circus) was a time when the president of the United States (Franklin Roosevelt) could not be seen in public or in pictures sitting in a wheel chair. He would have appeared to be “inadequate” to cope with the dual tragedies of the depression and World War II. That too has changed! A few clicks of a computer mouse bring forward long lists of legislators with disabilities in nations ranging from Afghanistan to the United States. For example: Partial list of current and former U.S. legislators 9
• Tammy Duckworth, Congresswoman from Illinois: Lost both of her legs and damaged her right arm due to a rocket propelled grenade attack in the Iraq War.
• Greg Abbott, Governor of Texas and former Texas Attorney General: Paraplegic due to an accident when a falling oak tree hit him in the back.
• Max Cleland, U.S. Senator from Georgia: Triple amputee (both legs and one arm) due to a grenade blast in the Vietnam War.
• Kristen Cox, Republican nominee for Lieutenant Governor of Maryland Blind from Stargardt disease.
• Bob Dole, U.S. Senator from Kansas and 1996 presidential candidate: Has had a withered, useless arm since a World War II injury.
• John Porter East, U.S. Senator from North Carolina: Paraplegic due to polio.
• Thomas Gore, U.S. Senator from Oklahoma: Blind from childhood accidents.
• Daniel Inouye, U.S. Senator from Hawaii: Lost his right arm due to grenade shrapnel in World War II.
• James Langevin, current U.S. Representative from Rhode Island: Was injured in an accidental shooting when 16 and is now a quadriplegic.
• John McCain, current U.S. Senator from Arizona: Limited use of arms and “off-kilter gait” due to torture as a prisoner of war during the Vietnam War.
• David Paterson, former Governor of New York: Legally blind from birth.

SO WHAT HAVE SIDE SHOWS AND FREAK SHOWS TAUGHT US?
We can move beyond these “shows” when we understand the realities of the lives of these men and women as they reside and work in our communities. Over a 40-year period in the 19th century, Dorothea Dix successfully persuaded the U.S. government to fund the building of hospitals for individuals with special needs and circumstances – a major improvement over the state of affairs that then existed for the care of these individuals. One hundred years later, our society has moved beyond the conditions that had developed in these state institutions. The opportunity to view the side shows and freak shows can teach us how far we have come in our concern for individuals with special needs. •