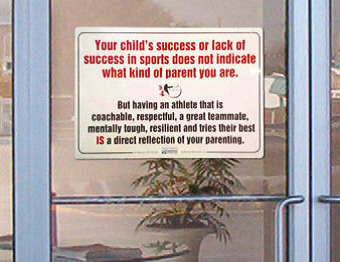 BY TOM CURRY Colleges today may want to recruit a certain student athlete to fit into their program. But remember that the student and parent must be able to fit in with the program.

The other day, we had an assistant college football coach in our athletic department recruiting one of our players. As I sat in and listened to his discussion with our football coach, he asked a number
of questions. The last one he asked became the idea for this column: “Is the student coachable? How about the parents?” I knew instantly what he was asking. Colleges today may really want to recruit a certain student athlete to fit into their program. However, the student and the parent
must be able to take coaching. The student and parent must be able to fit in with the program. If not, the coaching staff may begin to change their idea about the young man or woman and go in a different direction and find another player to fit their school.

In today’s world, it is sometimes very difficult to convince a recruited student athlete and their
parent of this fact. I have seen a number of potential student athletes talk their way out of, play
their way out of, or show such a poor attitude that schools simply lost interest. I have also seen a
school stop recruiting an athlete altogether because of an over aggressive parent. Simply stated, there are a lot of student athletes that can do what any athlete can do and some coaching staffs just don’t want the hassle of dealing with problems. So here are some thoughts and possible questions to ask your child and yourself to see if you are coachable:
• Do you second guess coaching decisions whenever a decision goes wrong or a strategy backfires? “Why didn’t the coach do this? Why wasn’t my son or daughter in the game? Why did the coach call a timeout?” And the list could go on and on. If you were the college coach offering a chance to
play at the next level, whether scholarship or aid, would you want that parent at your games having every move questioned?
• Does your child accept criticism, and work to change bad habits, or poor team or individual play? “I know, I know,” as one of my former players used to say to me. He simply refused to work hard on
the defensive end of the basketball court. The bench is a great teacher so that’s where he ended up.
• Is your child a good teammate? Does he or she encourage their fellow team members or do they openly criticize them and their play?
• How do you and your child act towards officials, opponents and fans? I was recently at a game where the parent of a highly recruited player from another school behaved so poorly he was asked
to leave the basketball game. I can only wonder if that will continue into the college setting.
• Do you support the students and coaching staff publicly, or is criticism the first thing that crosses your mind? If all a child hears is criticism, then expect all them to do is criticize.

Coachable! Team Oriented! Unselfish! Think of players at the highest level of some sports that were traded or let go by some very successful programs because those players didn’t quite fit in. Whether pro or college, many coaches just don’t want to deal with the problems brought on by poor
behavior and bad attitudes.

Lastly, there is a sign posted in a gym near here that says an awful lot. We all want the best for our children. For most of the people reading this column, this may not be necessary. But maybe for the ones that do need it a reminder on how we go about our business at youth and interscholastic sporting events, here it is. The sign says, “Your child’s success or lack of success in sports does not indicate what kind of parent you are. But having an athlete that is coachable, respectful, mentally tough, a great teammate, resilient and tries their best IS a direct reflection of your parenting.”
Have a great month!•

Are You and Your Child Coachable?

Colleges today may want to recruit a certain student athlete to fit into their program. But
remember that the student and parent must be able to fit in with the program.
VITAL SIGN: It may not be necessary for most parents reading this column, but others may need a reminder about how we go about our business at youth sporting events.