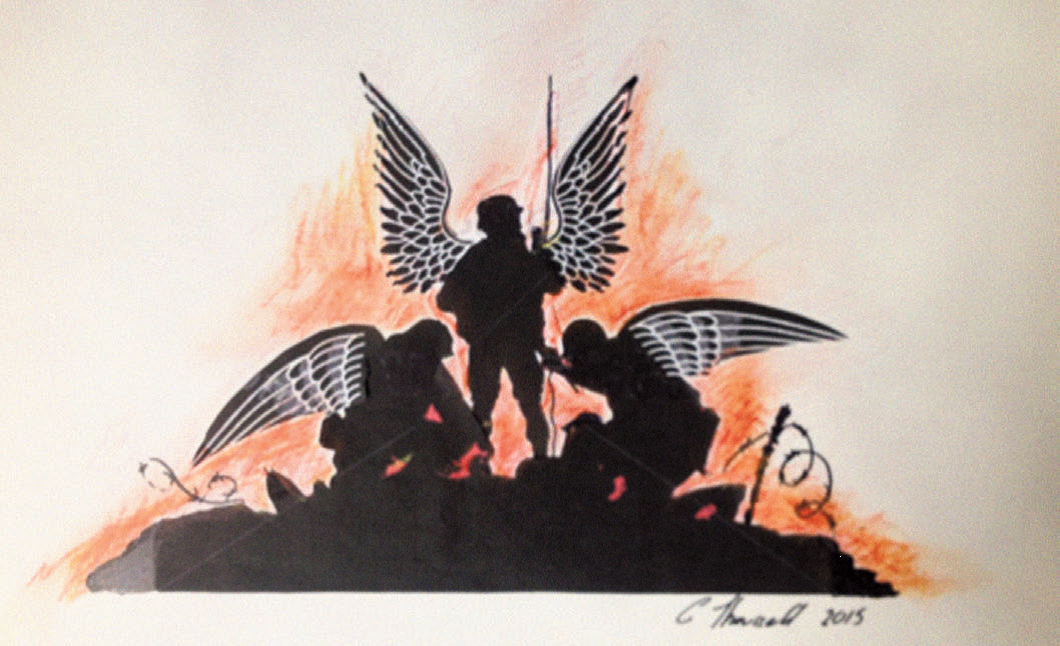 As the centerpiece of the One Million Rounds fundraising and awareness project, a life-size sculpture of the art is being created to go on tour in both England and the U.S. as an international campaign for our veterans.

The Fallen Hero Guardian Angels art was commissioned by Melanie Davis to reflect the stories of miraculous protection she was hearing as she wrote The Triumph Book: HEROES, 27 first person accounts from veterans spanning the decades of war from WWII up through our recent conflicts.
As the centerpiece of the One Million Rounds fundraising and awareness project, a life-size sculpture of the art is being created to go on tour in both England and the U.S. as an international campaign for our veterans. Graham Thrussell is a master metal artist who is building the statue and incorporating artifacts from all the wars which he and others have collected. The figures in the statue will represent a few of the heroes in Davis’ HEROES book and messages in the book from our veterans will be inscribed throughout the statue.

THE STATUE BY GRAHAM THRUSSELL

They stand upon a base created from the debris of war. From the battlefields of WW1 to WW2, through Korea, Vietnam, Iraq and Afghanistan, layers of artifacts will be woven together to form the substrate of war! Amongst the relics are shell cases found on the Airfields here; where I live! Swept from the returning American B17 Bombers, they are still harvested today, all these years later.

Upon this fossilized base of conflict stand the four figures. At the back, standing tall, is Mark A Forester, USAF, Combat Controller. Dressed in the uniform of the modern US Combat Soldier, wings outstretched shielding his comrades, wearing a radio, looking skywards, calling in help, standing proud!

Tending to the wounded Soldier is Jackie Y. Albers of US Women’s Army Corp (WAC) wearing the WW2 style uniform of the period. Kneeling over the wounded young Marine she holds a drip above him, the life-saving fluid is connected to his arm, the line is sculpted out of recycled brass contrasting strikingly against the grey of the sculptures, where it enters his vein is also brass, as his veins are pumped up, they shine out giving him LIFE!

At the foot of the wounded Soldier is a US Marine, Aldolphus Stuart. He is comforting the fallen Soldier from one Marine to another. He is wearing his uniform of the Vietnam war.

And the wounded Soldier? He is in the combat uniform of the modern fighting Marine! He is Mathew Brown. Surrounded by the Guardian Angels of past battles, he is ALIVE! Hurt, but protected by the Men and Women that have sacrificed everything for Freedom!

Running through the uniforms of each figure will be the words, sayings, and quotes of the Veterans themselves: their stories in their words! Although each figure has been inspired by those named above, whose stories are featured in The Triumph Book: HEROES, they are actually representing every serviceman or woman that has sacrificed for their country throughout history.

God Bless them All! •