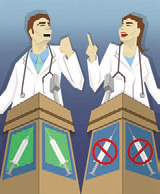 BY SHELLEY HUHTANEN Let’s start asking the hard questions and make the CDC and the news media bring everyone together, as opposed to creating witch hunts and dividing our parents.

Vaccines. Yes, I said that controversial word – the word that can send thousands of parents running to their Facebook pages, screaming to the masses about why their view is the correct one. As you start to read, you might have already assumed which side I’m on concerning vaccines, since I have a son with autism. You may assume that I’m one of those parents that has never vaccinated my child and you’re just waiting for my son to contaminate his entire school with a deadly disease. Well, read a little further because you might be disappointed.

I certainly do have a position on the vaccination controversy and it’s one I have not heard on CNN or any other news media source. Are you ready? My position is meeting in the middle and having compassion for both sides of the controversy. Let me explain. I’ll be honest, I enjoy watching Chris Cuomo. When my husband was deployed, I started my day with a cup of coffee watching Chris telling me the latest current events. It was comfort. It was the one thing I could count on when my husband was in Iraq or Afghanistan. I didn’t know if my husband was going to make it to the phone to call me, but knew Chris would be there to tell me what was going on in the world. About two weeks ago, I was given a dose of bitterness when I turned on the news to hear mudslinging towards parents who chose not to vaccinate their children. Over again and again, they stated that vaccines were safe and they certainly did not cause autism. Ok, I’ve heard this argument before. I get the issue. What made me livid was to hear guests on CNN state that parents who do not vaccinate their children do not deserve the right to have children.

Huh? Do you think we’ve gone a little too far? Let’s take a look at what these two sides have in common and then find some middle ground, shall we? What we all have in common is that we love our children. We really do. Another thing we have in common is that we want to make the right choices for our children, especially when we are scared. We want healthy children. I listen to both sides of the argument and my heart breaks when I hear of a child dying from a disease that should have been eradicated, but my heart also breaks for the parents who are convinced they have lost their children to vaccine injury. I believe them and it angers me when I hear parents discount these parents’ feelings.

The pain is real and should not be dismissed. Do we need vaccines? Absolutely, but there are a few things that can be reviewed that aren’t. Instead, as a society, we are drawing a line in the sand. Do you vaccinate or not? If the CDC really wanted to work with all parents, they would listen to both sides and accommodate both sides’ needs. Both sides would benefit and trust would be built. Let’s be real. If you have a child that has an autoimmune disorder and is very sick, or a disorder, such as autism, do you think all of the parents are going to be lined up to vaccinate when there is aluminum, formaldehyde, monosodium glutamate (MSG), etc., just because the CDC says, “It’s safe. Don’t worry.” If we all believe that then we are not living in reality. After reading CDC’s website, there is a reason why these chemicals are in vaccines. Chemicals will improve shelf life, antibiotics are added to some vaccines to prevent growth of germs. Aluminum is added to help the vaccine’s response to the body. My question to the CDC is, “Is there another way?” Throughout these two weeks we have not discussed parent’s options. A titer’s test is a blood draw that can be done to check the child’s antibodies that are already in the body due to previous vaccinations. If the antibodies are still in the child’s system, the child cannot contract a disease or give the disease to another child. Again, this is just a simple blood draw. If the child does not have enough antibodies, then the discussion will arise as to how they plan to vaccinate.

Again, I believe there is a need for vaccines. I really do. I just think we need to be smart about it and listen to both sides of the argument. We, as a society, need to stop discounting other parents’ experiences and stop assuming they are negligent and uninformed. On the other hand, parents who vaccinate their children love their children too. They want what is best for them. Let’s start asking the hard questions and make the CDC and the news media bring everyone together, as opposed to creating witch hunts and dividing our parents. Can the CDC develop an option for separated vaccines? Can the CDC and the news media invest in a campaign to educate parents on the titers? We need to come together, because in the end we have something in common. We all love our children.•

Let’s start asking the hard questions and make the CDC and the news media bring everyone together, as opposed to creating witch hunts and dividing our parents.

Shelley Huhtanen is an Army wife with two children, one with autism, whose husband is currently stationed at Fort Hood, TX. She is an autism advocate and currently the parent liaison for the Academy for Exceptional Learners.