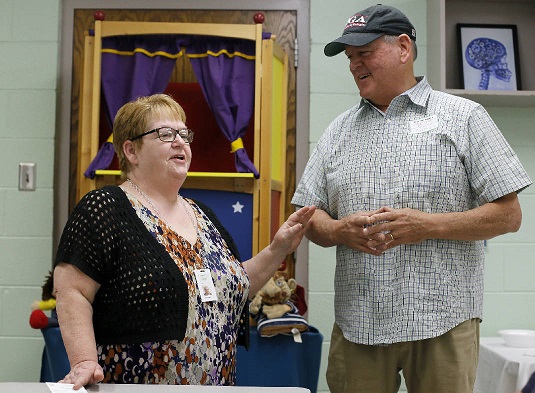 “We called him ‘John Elvis,’ ’cause he always liked to dress up like Elvis and play Elvis music,” she said.

Goodlet had Down syndrome, a genetic disorder caused when a person is born with extra genetic material from chromosome 21. Today, he’s remembered as the inspiration for the Orange Grove Center on Aging, Dementia and Longevity, an education, advocacy and research center in Chattanooga focused on the needs of older adults with intellectual and developmental disabilities.

Officially established in March, the center teaches evidence-based caregiving strategies to family members, medical professionals, students and anyone interested in learning to better care for seniors with dementia or disabilities.

One of the features is a “virtual dementia tour,” which simulates the distortion and disruption of dementia, an umbrella term for conditions like Alzheimer’s characterized by progressive mental decline, most commonly, memory loss.

“We don’t want folks feeling sorry for people with dementia. We want them to understand what’s going on,” said Dr. Rick Rader, director of habilitation at Orange Grove. “It totally changes your perspective when you can’t rely on your sensibilities and your senses.”

In recent decades, the life expectancy of people with intellectual disabilities, such as cerebral palsy, Down syndrome and autism, has increased tremendously. But with aging comes the risk factor of Alzheimer’s disease and related dementia.

Moreover, the risk of developing Alzheimer’s is six times higher in people with Down syndrome, and 75 percent of individuals with Down syndrome who live past 65 with develop the disease, according to a 2012 study in the European journal of neurodegenerative disease.

It was 12 years ago that Wade, assistant director of supported living at Orange Grove and one of Goodlet’s caregivers, began to notice changes in her friend. For people with Down syndrome in the early stages of Alzheimer’s, behavior changes often appear before memory loss, making the disease hard to pinpoint.

“At first, you really weren’t quite sure what it was, but then it just got more and more obvious that he had a form of dementia,” she said. Then, Goodlet’s sister came to visit.

“She said, ‘He’s acting just like daddy when he had Alzheimer’s,’ and that was that big light bulb moment,” Wade said.

In her quest to help Goodlet, who was at the time in his 50s, Wade sought information on caring for people with dementia.

“What I found is that there was a lot of information about Alzheimer’s, but not very much about this population and Alzheimer’s,” she said. “It does present differently. One of the biggies is that it tends to present much earlier than the general population.”

Since people with disabilities, like most individuals, are living longer due to advancements in health care, technology and nutrition, Wade’s hope is that the center can serve as an informational resource on caring for this growing demographic.

Early Alzheimer’s symptoms in people with Down syndrome:

“They have all the same problems that the general population does with aging, plus a host of other things on top of it,” she said.

Rader said greater awareness is needed among providers, who were likely caring for many people with intellectual disabilities and Alzheimer’s long before Goodlet.

“One of the reasons that dementia with this population was never announced to us is that our individuals didn’t live this long,” Rader said, adding that some of the behavioral symptoms of dementia can mimic or be masked by other conditions.

“We have an expression in medical school that says, ‘If you hear hoofbeats, it’s probably horses,'” he said. “But don’t overlook the fact that those hoofbeats can be made by zebras.”

Rader said another problem with diagnosis is a lack of dementia screening tools, since normally physicians use a cognitive test.

“You couldn’t do that with our population,” he said. “On any given day, they couldn’t tell you who the president is. They couldn’t count back from 100 by sevens.”

While the statistics for Alzheimer’s in people with intellectual disabilities may seem grim, Wade said the goal of the center is to capitalize on a person’s remaining abilities, rather that worrying about what they’ve lost.

“We want to give the person the best possible quality of life for as long as possible,” she said, adding that small details like music and creating an environment that’s familiar and consistent can go a long way.

Jack Goodlet, John’s brother, stopped by to visit the center during an open house on Tuesday.

“That was a horrible disease, but John made a lasting impression on everyone he met,” he said. “He already loved everybody. He wasn’t judgmental. I think when normal people go to heaven, they’ll be made like John.”