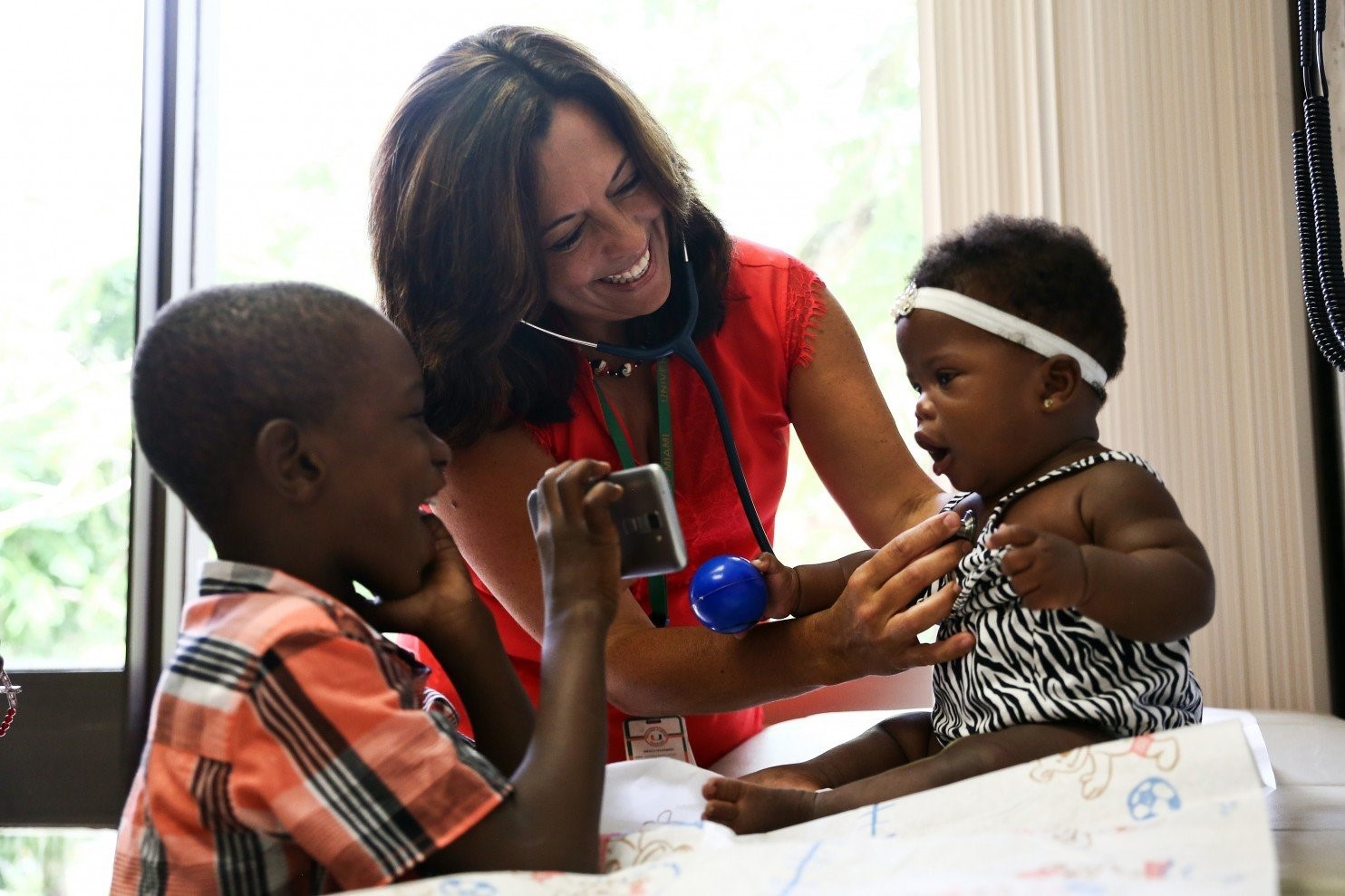 Silvia Fajardo Hiriart, medical coordinator of a Florida Early Steps program at the University of Miami, works with 9-month-old Taylor Moore as her brother Marion watches. Taylor does not have Zika, but is undergoing developmental tests that children with the virus will likely face. (Scott McIntyre/For The Washington Post)

At least 12 babies in the United States have already been born with the heartbreaking brain damage caused by the Zika virus. And with that number expected to multiply, public health and pediatric specialists are scrambling as they have rarely done to prepare for the lifelong implications of each case.

Many of Zika’s littlest victims, diagnosed with microcephaly and other serious birth defects that might not immediately be apparent, could require care estimated at more than $10 million through adulthood. Officials who have been concentrating on measures to control and prevent transmission of the virus are now confronting a new challenge, seeking to provide guidance for doctors and others who work with young children with developmental problems.

The White House and Centers for Disease Control and Prevention are holding regular talks with experts and nonprofits about the array of services the infants and their families will need well into the future. Advocacy groups are seeking to raise awareness among parents and day-care providers, and some high-risk states are streamlining existing programs so that they can rapidly connect Zika babies with physical, occupational and other therapies.

On Thursday and Friday, CDC and the American Academy of Pediatrics convened a special meeting in Atlanta to establish guidelines on how to evaluate and care for infants whose mothers were infected with the virus during pregnancy. They heard ophthalmologist Camila Ventura of Brazil, the epicenter of Zika in the Americas, describe how extremely irritable, even inconsolable, the newborns with microcephaly are.

Just as daunting is the question of how to best monitor those exposed in utero but without obvious abnormalities at birth. Vision and hearing problems can surface, as can seizure disorders.

“That uncertainty and lack of information will be very stressful for the families,” CDC physician Kate Russell said.

The urgency of these discussions increased after Congress adjourned in mid-July without taking action on additional Zika funding. Lawmakers will not return to Washington until September.

“People have been so focused on prevention,” said Katy Neas of Easter Seals, a nonprofit that provides services to children and adults with disabilities. “Now we’re getting to ‘Holy moly, we’re actually going to have kids here with Zika, and what do we need to do?’ ”

Federal and local health officials are monitoring at least 400 pregnant women with Zika in the 50 states and the District, up from 346 a week ago, and another 378 pregnant women in the U.S. territories, most of them in Puerto Rico. In addition to the babies already born with Zika-
related problems — the latest was announced Friday by New York City health officials — at least six womenhave lost or terminated pregnancies because their fetuses suffered brain defects from the virus.

Florida is investigating two possible cases of locally transmitted Zika — the first in any state. Should the virus spread there or elsewhere in the region, it would be the first outbreak linked to serious birth defects since the 1964 rubella outbreak that killed 2,100 babies and left 20,000 others at risk of deafness, heart damage and microcephaly.

“It’s been more than 50 years since we’ve seen an epidemic of birth defects linked to a virus — and never before have we seen this result from a mosquito bite,” said Margaret Honein, chief of CDC’s birth defects branch.

But unlike with rubella, the vast majority of people with Zika have no symptoms. That poses enormous diagnostic challenges because the most accurate tests need to occur within the first two weeks of infection. Also unlike rubella, researchers do not truly know the magnitude of risk for a pregnant woman passing Zika to her fetus.

“This is new territory,” said Anne Schuchat, CDC’s deputy director, with public health officials simultaneously having to learn about Zika’s grave impact on fetuses while devising interventions for the consequences. “We’re trying to prepare ourselves and prepare pregnant women for when those babies are born and what should happen to them.”

In addition to microcephaly, a rare condition usually characterized by an abnormally small head and underdeveloped brain, Zika can cause neurological harm affecting vision, hearing, and muscle and bone development, research shows. The range of impairment can be vast. Some babies lack the most basic sucking reflex, which means they might never develop the ability to swallow.

Even in babies who look “absolutely fine” at birth, ongoing screening may be necessary to detect subtle changes that could signal serious problems. Abnormal movement and prolonged staring, for example, could indicate an emerging seizure disorder.

“You have to really follow them and check,” explained V. Fan Tait, deputy director of child health and wellness for the American Academy of Pediatrics. “What do you need to do for the evaluation, and who else needs to be involved? . . . We know the worst-case scenario, but what we don’t know is the continuum.”

Although the pediatric neurologist acknowledged that it is unclear how many children could be affected, “in my mind, it will stretch the system that we have to care for them,” she said.

Federal law requires every state to have an early intervention program that offers services to eligible infants and toddlers up to 36 months old who have significant developmental delays or conditions likely to result in such delays. The programs, typically funded with state and federal dollars, represent a critical support system for children with complex needs.

In Florida, which has 46 pregnant women with Zika, officials recently decided that any child with a confirmed Zika diagnosis automatically qualifies for early screening and intervention.

[Zika can cause microcephaly even if moms have no symptoms]

“We’re anticipating this is going to be a major problem,” said Charles Bauer, a professor of pediatrics and neonatology at the University of Miami Mailman Center for Child Development. The university runs one of the state’s 15 Early Steps programs, and its pediatricians, psychologists and other specialists see more than 3,500 infants and toddlers a year.

“We’re trying to prepare ourselves to identify these babies and get them into services as soon as possible,” Bauer said. “This is a new category of at-risk baby.”

Children in the university’s program are evaluated by specialists, such as Silvia Fajardo Hiriart, a pediatrician, and Michelle Berkovits, a psychologist. Each goes through a series of physical and neurological tests to gauge developmental milestones. The team checks to see that babies are batting at toys at about 3 months old, sitting on their own by 9 months and saying their first words by about their first birthday.

Speech pathologist Glendys Sanchez performs a development evaluation with 2-year-old Namine Andino as his father, Miguel Andino, watches at the Early Steps program clinic at the University of Miami. Namine does not have Zika, but children with the virus could face similar developmental assessments. (Scott McIntyre/For The Washington Post)

The program also helps mothers go through the grieving process.

“What we see with most of our moms is that they lost their expected normal baby,” Fajardo Hiriart said. “We try to focus on what their child is doing and focus on the positive and provide support.”

With Zika, that support will be harder. It is a new disease. No one knows how a child’s development will be affected in the long term.

Parents of a child with autism or Down syndrome can turn to well-established organizations offering resources and showcasing successes, but Zika-affected families have no such help. At least not yet.

“For a family, it’s going to be more isolating because . . . there’s not a support group,” Berkovits said.

Across the South and Southwest, where the mosquito that is the primary carrier of Zika is endemic, advocates and officials are worried about the ability of private and state systems to handle more children with special needs.

Many Early Steps programs in Florida, for instance, are near capacity and already struggle to meet the federal requirement that all children be evaluated within 45 days of referral for developmental delays, Bauer said.

The exploding prevalence of Zika in Puerto Rico could be a further strain if new mothers there begin seeking care for their babies on the mainland. Several dozen pregnant women are being infected daily on the island, CDC officials said.

But many parents might not have alternatives. The parts of the South that are most vulnerable to the virus are home to some of the nation’s poorest mothers with the least access to health care.

“In Miami, you may have access to a full range of specialists, but if you’re on the Gulf Coast, in a small town in Alabama, forget it,” said Cynthia Pellegrini, a senior vice president at the March of Dimes Foundation.

Funding for support services often is low, is rarely assured and varies tremendously by state. Only intervention by the Texas Supreme Court delayed $350 million in Medicaid program cuts from taking effect recently. Lawmakers there had approved the cuts last year, putting physical, speech and occupational therapies to disabled children at risk.

In confronting a disease that has no treatment, experts said it may take years to fully grasp the damage Zika does over a child’s lifetime.

“We’re at the beginning of the process of discovery. We’re going to find out more and more unsettling issues about this virus,” said Irwin Redlener, a Columbia University public health professor and president of the Children’s Health Fund, which assists disadvantaged children. “There’s going to be a significant uptick in the babies with the obvious consequences, like microcephaly, and an unknown uptick in babies with more subtle problems that have to be assessed.”

Association of University Centers on Disabilities