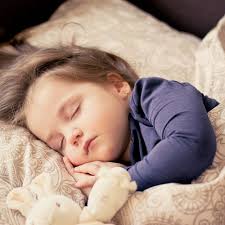 Virtually all sleep problems which occur in children in general are seen in children with Down syndrome. Children with Down syndrome are more likely to develop certain types of sleep disturbances. Some sleep problems have a physical cause; others have a behavioural basis. Some are more likely to occur at certain ages, whereas others may appear during childhood and then persist throughout most of the individual’s life if treatment is not provided. It is very important to identify the underlying cause of a sleep disorder prior to attempting to treat the symptoms.

Behavioural sleep problems are among the most common sleep problems in children, including those with Down syndrome. They include difficulty in settling the child to sleep, repeated night time waking with demands for parents’ attention, early morning waking and insisting on sleeping with parents. In some cases, a child may have challenging behaviour and the night time problems are just another aspect of this. In other children, the presence of a physical or medical disorder (such as an ear infection or other painful condition) may disturb their sleep. More commonly, the settling and night waking problems develop when a child has not learned to fall asleep without their parents being present. Therefore, when they wake up in the night, they are unable to re-settle themselves and demand their parents’ attention. It is important to say that what may be a problem in one family may not be in another. However, what may not be a problem when children are young, may become a problem when they are older and the longer a behaviour has been going on, the harder it is to change.

Studies have consistently shown that children/adults with Down syndrome are more prone to OSA than people in the general population. This is due to various physical characteristics associated with the condition including floppy muscles in the throat, enlarged tonsils and adenoids and a smaller upper airway. OSA occurs when the upper airway at the back of the throat becoming blocked repeatedly during sleep. Each time this occurs, breathing stops for a time and the child is woken up by the struggle to breathe.

These interruptions in breathing (‘apnoeas’) may occur many times during the night (or during daytime naps) causing sleep disruption and poor- quality sleep. It is the frequency of these events which determines the severity and whether treatment is necessary. Night time features include combinations of loud snoring or coughing or choking noises, restless sleep, sleeping with the head tipped back (to try to open-up the airway), other unusual sleeping positions, repeatedly interrupted breathing, excessive sweating and possibly bedwetting.

Sleep studies that measure oxygen levels and other physiological measures can be helpful in establishing a diagnosis and the severity of the problem. Daytime consequences of OSA include excessive sleepiness, behaviour changes and impaired concentration and poor memory. There is evidence to suggest that OSA is under-recognised in the general population and more so in individuals with Down syndrome. About 2 percent of children in general have some degree of OSA (usually because of the relatively simple matter of enlarged tonsils and adenoids). In contrast, the figure is more like between 50 and 80 percent in children with Down syndrome.

Some children may have both a physical and a behavioural sleep problem and it is possible that one may perpetuate the other. Careful assessments are needed to establish the nature of the problems present and treatment tailored accordingly. A multi-disciplinary approach is required in these instances. The physical problem should be treated first and the behavioural problem tackled afterward.

Many other types of sleep disturbance are now known to exist in both children and adults; those mentioned have been selected because of their special relevance to children with Down syndrome. That said, however, because many of these other sleep disorders are common, they might well occur in conjunction or instead of those described above. Examples include sleepwalking or sleep terrors, head banging, night time fears, nightmares and bedwetting. Seizures and central apneas can occur during sleep too. Children with Down syndrome can be very restless sleepers and move around a lot during sleep. Some of these conditions eventually stop of their own accord but others need special treatment which can often be effective.

If you are concerned about your child’s sleep you should contact your physician. Health professionals should be aware of which issues to look out for, in particular:

Sleep problems should be part of routine screening, not only because of the immediate distress that a sleep problem can cause to the child and other family members, but also because treatment of the sleep problem might have a beneficial effect on the child’s learning and behaviour.

In the case of children with Down syndrome, healthcare professionals should enquire about both sleep disorders of a behavioural origin and those caused by physical factors especially OSA. Combinations of the two types of sleep problems may well occur.

The possible effects of persistent sleep problems on other members of the family should be considered carefully. Distress, depression and sometimes marital problems can result from long-standing sleep problems for which no effective help has been sought or provided.

Community and hospital services must be alert to the possibility of severe sleep disorders in children with Down syndrome. Appropriate psychological, physiological and other clinical investigations must be made available. Treatments appropriate to the individual case should be provided as early in the child’s development as possible. Effective treatment is very likely to benefit the child and the entire family.

Editors Note: Parents cannot rely on observed symptoms to assess whether their child has a sleep disorder as observable symptoms are not always present. Symptoms may be silent or may take place while parents are sleeping. The American Academy of Pediatrics Health Supervision for Children with Down Syndrome (2011) states: there is poor correlation between parent report and polysomnogram results. Therefore, referral to a pediatric sleep laboratory for a sleep study or polysomnogram for all children with Down syndrome by 4 years of age is recommended. Refer to a physician with expertise in pediatric sleep any child with signs or symptoms of obstructive sleep apnea or abnormal sleep-study results.

This article is an edited version of an article from the Down’s Syndrome Association UK. The full publication Health Series: Managing Sleep Issues in Children is available for free download at https://www.downs-syndrome.org.uk/download-package/managing-sleep-issues-in-children/.