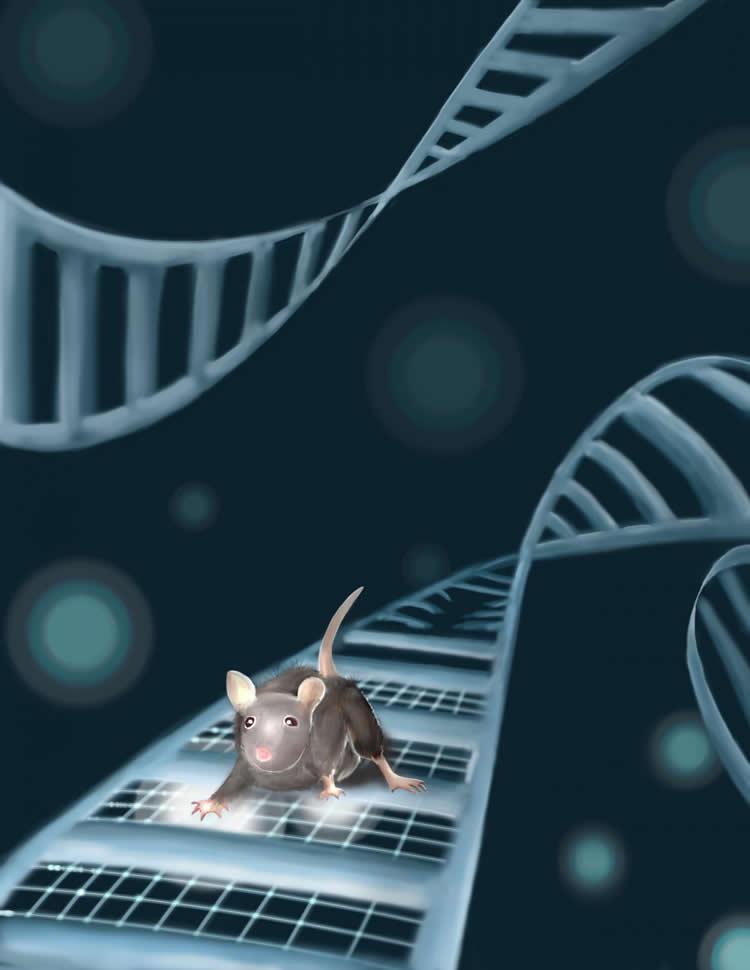 Summary: Study sheds light on how SETD5, a gene associated with ASD, alters behavior and may lead to less flexibility in the brain.

About 1% of patients diagnosed with autism spectrum disorder and intellectual disability have a mutation in a gene called SETD5. Scientists have now discovered what happens on a molecular level when the gene is mutated in mice, and how this changes the mice’s behavior. This is an important step towards understanding how mutations in the SETD5 gene may cause cognitive changes in affected patients. The study was led by Gaia Novarino, Professor at IST Austria, and Kyung-Min Noh, Group leader at the European Molecular Biology Laboratory in Heidelberg, Germany; Elena Deliu, Niccolo Arecco, Jasmin Morandell and Christoph Dotter share first authorship. The results, which suggest that the brains of mice with a SETD5 mutation may be less flexible, are published today in Nature Neuroscience.

In a previous study published in 2014, Gaia Novarino, in collaboration with a group at Bonn University, identified mutations in the gene SETD5 as a relatively frequent cause of intellectual disability and autism. Among patients who are diagnosed with intellectual disability and/or autism spectrum disorder that can be traced to a gene mutation, 1% has a mutation in the gene SETD5. Before the follow-up study published now, however, it was not known what SETD5 does, says Novarino: “This was the motivation for our work. Knowing nothing about this gene, we wanted to find out what its product does.”

The researchers set about characterizing what the SETD5 gene product does on a molecular level and link this to how behavior changes when SETD5 is mutated. This endeavor was not about understanding mouse biology though, Gaia Novarino clarifies. “We want to know what happens in patients who have a mutation in SETD5. To be able to understand this, we made mice that have the same genetic defect as seen in humans.”

For their studies, the researchers characterized what happens in mice which carry one mutated copy of SETD5 and one intact copy of the gene. They found that in the mouse embryo, SETD5 is important for regulating gene transcription, the process by which the blueprint of DNA is turned into a set of instructions for making proteins. In early development, SETD5 plays a role in the specification of tissues, this is the reason why developmental defects are seen when SETD5 is mutated.

Later on in life, SETD5 regulates gene transcription in dynamic processes when signals are integrated, for example to form memories or during learning. When mice with SETD5 mutation are set a learning challenge, the dynamics of gene transcription is different from that in mice without the mutation.

The researchers hypothesize that mice with a SETD5 mutation have a more inflexible brain. SETD5 mice were found to make memories that are too strong and not easily overwritten. “In the brain, balance and precise response are important. The SETD5 mice make more stable memories, which could make the brain inflexible. Because the brain is less flexible, they cannot easily make new memories or adapt to new situations”, Gaia Novarino explains.

The study authors also found that SETD5 cooperates with other proteins to regulate gene expression during learning and memory formation. Several of these associated genes, when mutated, also lead to intellectual disability and/or autism spectrum disorder in patients, says Kyung-Min Noh. “We have found a cluster of genes that are all related to these disorders.”

Understanding the molecular function of SETD5 and linking it to mouse behavior was an important step towards helping patients. “When we look at the brain of these mice, the structure hasn’t changed. So there is no structural barrier that would give a reason why treating patients with SETD5 mutations wouldn’t be possible”, Novarino explains, “This gives us hope that eventually, we will understand how to treat the cognitive issues of patients with SETD5 mutations. The extent to which the condition is treatable will be seen. We have hope.”