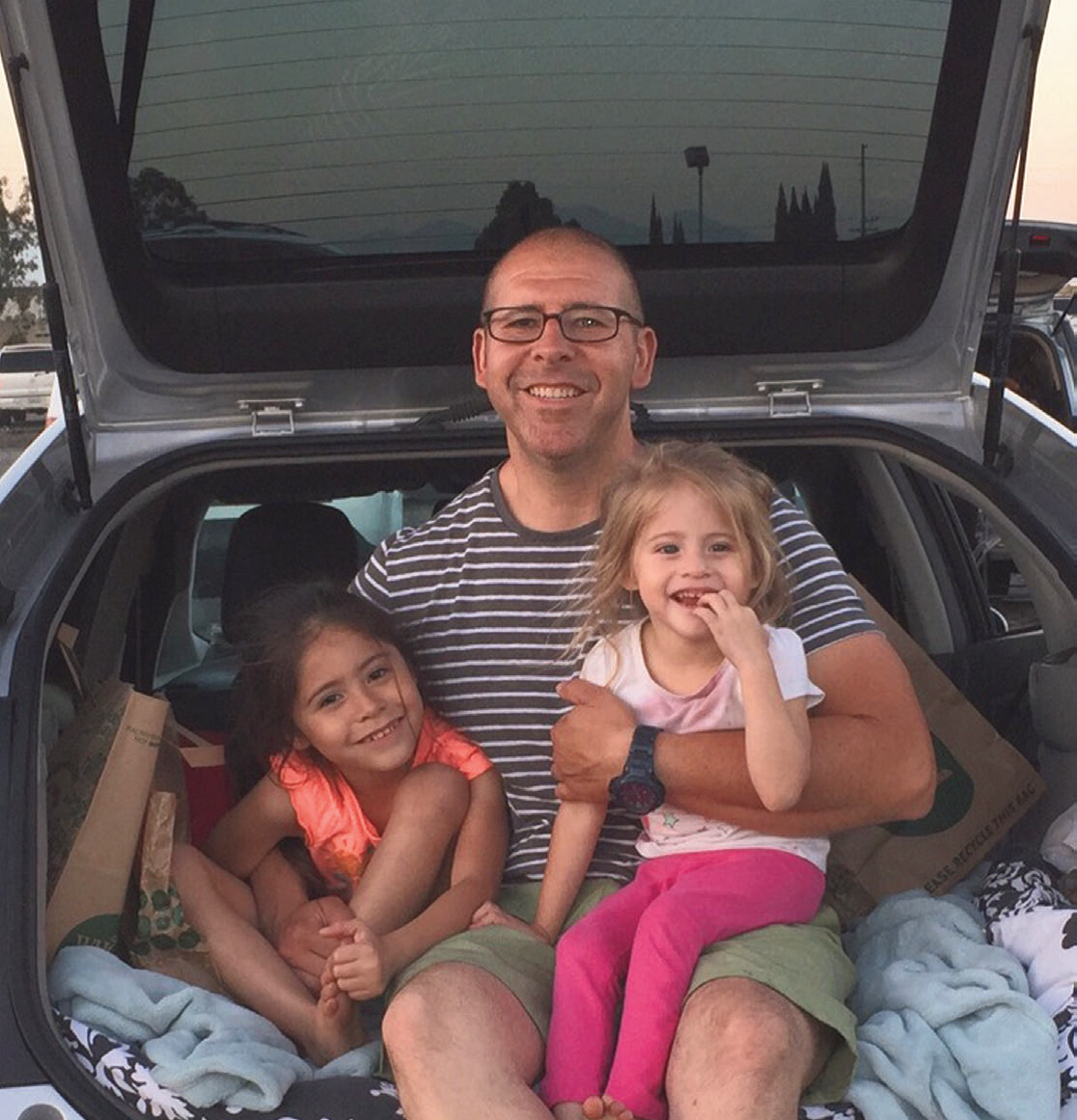 As we move into the hustle and bustle of the holidays, we are looking to honor all men and women of service. At this time, we are featuring two fathers who have encountered difficulties in their own lives, yet have shown up to serve their communities in heroic fashion. We honor Tony DeLeon, serving Los Angeles County Sheriffs Department (LASD is the nation’s largest Sheriff’s Department and the second largest law enforcement agency in the United States). We would also like to honor David Dragotto who has served as a firefighter for the past 24 years. David is married to Natalie and they have a daughter, Gianna.

Tony is a proud single father of three, two daughters (ages three and six) and a son (11). As a police officer, Tony risks his life daily to serve and protect the community. To be hired and continue with the police force, you must pass both mental and physical testing. Your mind has to be sharp, as you are constantly making quick, calculated, and at times life-altering decisions. His decisions impact his life and the community he serves.

In a quest to heal his injuries, Tony recalled listening to a podcast regarding hyperbaric oxygen treatments (HBOT) which, in turn, put him on the road to attending a health and wellness conference. While there, he saw a booth with OxyHealth hyperbaric chambers. OxyHealth was giving complementary treatments at the conference, unfortunately they were completely booked the day Tony was there. The OxyHealth staff had invited him back to the office in Santa Fe Springs for complementary treatments. Tony previously had a brain scan when he went in for the treatments. At OxyHealth, he met owner Samir Patel before the treatments, and Tony expressed his gratitude for their generosity of providing the complimentary treatments for men and women of service.

Tony recalled after his first treatment and told me that he drove home feeling very euphoric and very relaxed. He was sitting in peak Los Angeles traffic without a worry in the world, which was not typical of how he would normally feel in peak traffic. He also noticed after treatments his cognitive function started to improve, that his recall time with his memory became shorter and shorter with treatments. Before treatments he was struggling with his memory.

Tony DeLeon feels HBOT has improved his overall lifestyle and function. He mentioned that he has increased energy levels and his cognitive abilities have improved. He feels the treatments have improved his quality of life, including at work, where he feels he is performing better. Best of he has improved quality time with his children!

David Dragotto best exemplifies the heroic firefighter. To become and continue to be a firefighter, one is required to pass an extremely rigorous physical fitness test and written exam. One must train to run long distances, climb stairs and lift as much as 200 pounds. The challenges facing firefighters demand that they be in tip-top shape, to negotiate difficult obstacles in the face of fire, smoke and incredible heat. Lives are almost always at risk.

You can imagine, with such a demanding career, David would like to ensure that his family is safe and healthy as well. He feels more confident going to work to serve the community and he can perform his job better, knowing his daughter is safe with her OxyHealth HBOT treatments. His family’s well-being is his number one concern and he has trusted his daughter’s health for the past 10 years with an OxyHealth HBOT chamber.

When I spoke with his wife Natalie, she shared her story about Gianna. Her daughter’s onset of seizures started immediately after her first set of immunizations shots at two months old. That was when the eye-rolling started. The twitching began after the 2nd set (four months) and she had her first grand-mal seizure. The ER said it was febrile. During the 3rd set (at six months), the grad-mal began to become frequent. Gianna was in and out of the hospital every few weeks from uncontrolled seizures and pneumonia due to aspiration issues. Gianna was diagnosed with epilepsy at six months old and was given Phenobarbital. She had difficulty swallowing and couldn’t handle her own saliva. They had to suction her constantly to avoid aspiration pneumonia. Gianna lost all head control, didn’t reach for her toys, her hands were always clenched into a fist, and she stopped rolling on the floor. Gianna’s pediatrician was concerned because her arms were continuously in extension and she no longer showed any eye contact.

At 10 months, Gianna was fed only by G-tube, had a variety of seizures lasting 30 seconds to 5 minutes, up to 100+ seizures a day, and she would become lethargic after each seizure. Any body stress such as illness, even temperature change, would increase her seizure activity. Gianna was shown to have a broad range of seizures all over the brain. The majority of her seizures were atypical absence associated with Lennox Gastaut Syndrome (LGS). The parents went to every specialist imaginable, with no luck in finding an underlining diagnosis.

Gianna didn’t show any characteristics of any metabolic disorder. But she had severe developmental delay, could not eat by mouth due to aspiration issues, was subject to re-occurring illness, hypotonic, experienced reflux, would not use her hands, did not give eye contact and had no head control. Natalie said, “Doctors told us that Gianna would never be “normal” and most likely would not live past five. We switched pediatricians at age one and discontinued her vaccinations. Though we know today that the vaccination shots were not the cause of her disorder, we felt that it contributed to the severity.”

“When Gianna was one-and-a-half years old, we were still on a mission to find her diagnosis. We think having this mission helped our healing process of getting through knowing our little girl wasn’t getting better and might not make it. Due to Gianna’s swallowing issues, we only fed her during Vital Stim therapy. Vital Stim is a non-invasive external electrical stimulation therapy to help muscle strengthening and swallowing. It was during this feeding time, we noticed that when we gave Gianna foods high in carbohydrates/sugars, she would have these larger, longer, tonic clonic seizures where she would turn blue. As parents, we felt she had to have an underlining condition where she couldn’t process these types of foods. With the help of her metabolic doctor, this finally led us to the diagnosis of CDG (Congenital Disorders of Glycosylation). At age 2-1/2, Gianna was diagnosed with CDG. Type 1/subtype unknown. Age eight, Gianna was diagnosed with CDG1k (subtype k).”

Natalie Dragotto shared: “I was so inspired by Shannon Kenitz’s quest to help her daughter that I did HBOT with my daughter, Gianna – because I saw Shannon’s story when Gianna was almost two (she is 10 today). After we saw her on the Montel Williams show, her story inspired us to do HBOT and our lives changed forever. I remember telling someone that if I could meet anyone I’d want to meet Shannon, just to tell her how much she made a difference… About a year later, she opened her center “A Place of Grace” in Irvine, CA, right down the street from our house. I got to meet her in person and now I consider myself lucky to be able to call her a friend.”

“Only one doctor (of so many) would give me the Rx. Sometimes you are just meant to meet people in your life and I think I’m lucky. I can say that Gianna is better because Shannon shared her story. Seeing this video brings back memories. When I first saw Grace’s story, Gianna couldn’t even play with toys. Now Gianna can crawl and is working on her balance. Gianna has come so far in the past ten years of HBOT treatments.”

ABOUT THE AUTHOR:
Michelle Boudreau is a national bestselling author who was once considered for a Pulitzer Prize nomination. She is a UCLA alumni, and media journalist, authoring numerous publications. Boudreau has 16 years’ experience as a  consumer product specialist, focusing on health product awareness.