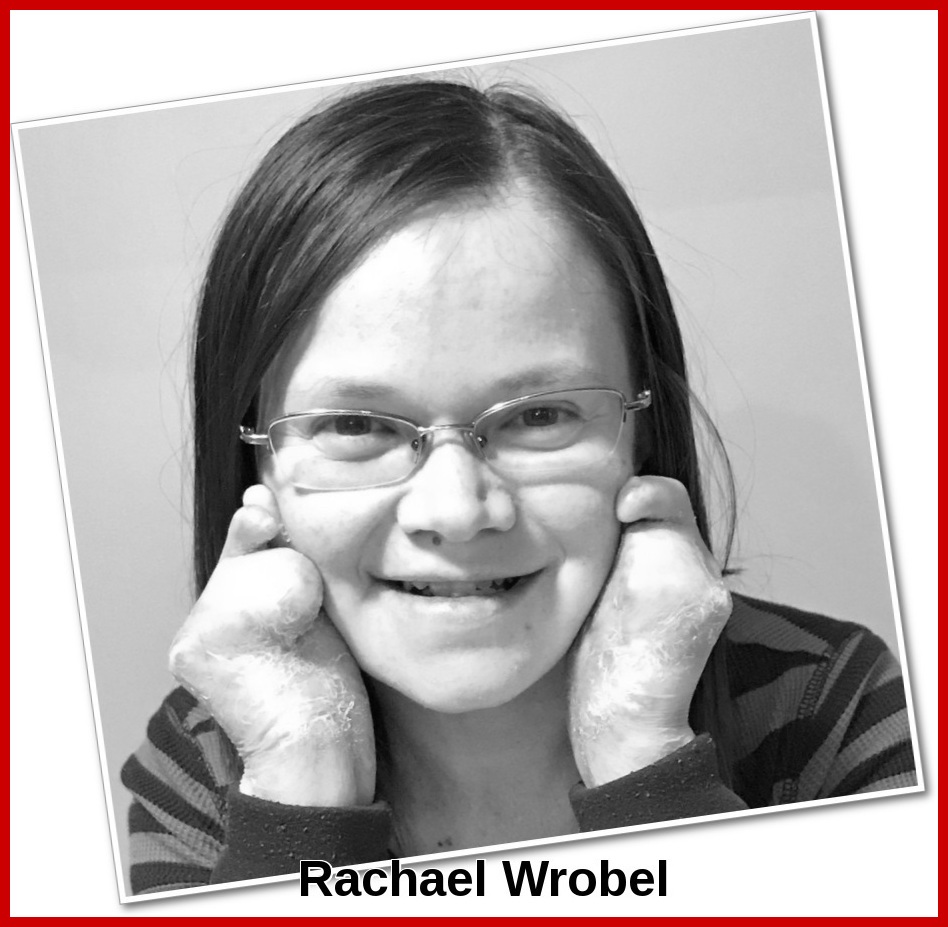 I first met Rachael at a bowling alley.  She is a support worker for people with disabilities and she was there with a client. At the time, I was looking for someone to work with my son and Rachael was highly recommended. Acquaintances told me that she was a safe driver, filled out paperwork on time and was very engaged with her clients. She sounded perfect, so I walked over to meet her. I waited while she finished assisting a young man with his bowling shoes before I stuck out my hand to introduce myself.  She extended her hand towards me and that’s when I noticed that she has no fingers. Yes, you read that correctly—the girl who drove to the bowling alley, helped her client with his fine motor tasks and filled out service logs…Has. No. Fingers.

What is Epidermolysis Bullosa (EB)?

Rachael was born with a rare genetic skin disorder called Epidermolysis Bullosa or EB.  Her condition is caused by a lack of protein between the top and bottom layers of her skin.  Without this vital protein, the two layers are not anchored, so they move independently from one another and any action that creates friction between the layers (like rubbing or pressure) will create blisters and painful sores on her body.

What are her Symptoms?

How Rare is EB?

Of the approximately 4 million babies born in the US each year, only 80 of them will have EB.  To say that the condition is rare is an understatement.

Rarer still, is my friend Rachael.

Despite her disability, she is an independent, smart and vibrant young woman.  In 2012, Rachael graduated from the University of Michigan with a degree in Children & Family Services. And she is always up for anything. Rachael’s philosophy is “don’t think about it, just do it” because trying new things and staying active helps her avoid a depressing cycle of thinking about what she can’t do instead of focusing on what she can do.

Laughter is the Best Medicine

At times I forget that she has a disability.  It is not uncommon for me to ask her to grab something forgetting that it might be a struggle for her.  And since we both share the same dark sense of humor, we also laugh about her disability.  Recently, Rachael and I were out with my son and some of his friends at, you guessed it, another bowling alley.  Shortly after we got there, I offered to buy everyone a round of hot chocolates. As I finished placing the order, I turned and saw Rachael walking toward me.  Without thinking, I blurted out “Oh great, the one with no fingers is here to help carry the hot drinks!”  The woman behind the counter stared at me in horror, but the two of us just giggled.

Rachael says she actually likes it when I forget that she has EB or when I joke with her about her disability.  It makes her remember that although EB often confines her, it never defines her.

It has been 4 years since I first met Rachael and I am thankful for the work that she does with my son. I am also proud to call her my friend, so I am taking her out to celebrate our friendship.  Let’s see…lunch? Movie?  No. Wait, I know.  Back to the bowling alley!  Nah, that won’t work.  The lady at the snack counter won’t let me go there anymore….

Have questions for Rachael?  Want to learn more about EB?

Colleen Berlingieri is a Mom, & Disability Advocate . She lives in Plymouth Michigan with her husband Tony, her two sons, (Geo & Jake), & their rescue dog Andi. Their family owns the FATWHEELS brand that makes adaptive training wheels that enable individuals with balance issues to ride a typical bike. Colleen’s dedication to raising her family & empowering individuals with disabilities is her life’s work and the driving force behind her company & all that she does.