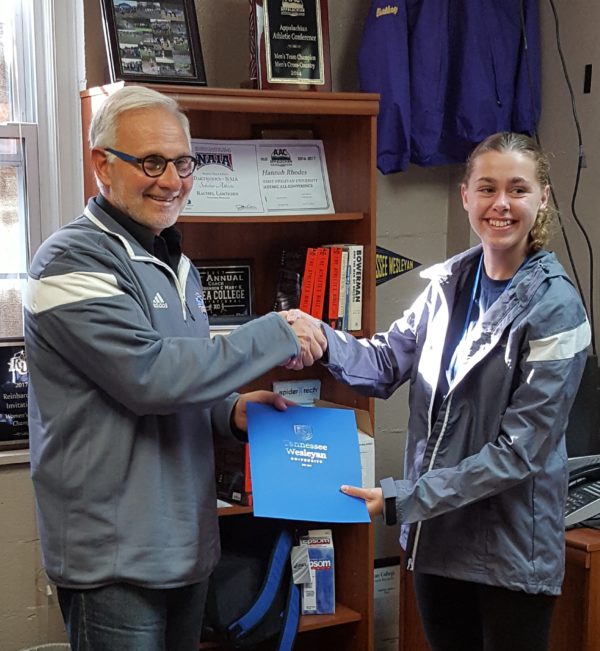 As I sit down to write this, I still find it all hard to believe. You see, my daughter, Bree, walks at a pace equal to that of a turtle.  Okay, I exaggerate, but only to prove the point that she prefers to walk slowly.  As I often say, hurry means nothing to her and the more I tell her to hurry, the slower she goes.  So, as I have written before, I was SHOCKED, when 4 years ago she told me she had joined her high school track team.  Besides the fact that “running” has changed her life in more ways than one, I am beginning to understand how important it is to many individuals on the Autism Spectrum.

We immediately saw positive changes in Bree when she started “running” consistently. As time went on, she told us that when she runs, it is the only time her anxiety and OCD are not affecting her.  As she tells me, she runs away from her anxiety/OCD. We also noticed that her moods were more positive when she is running regularly and an increase in negative thinking when she missed a day. Some of it is obvious, the effects of exercise and moods, but we didn’t realize how much of a difference it would make.

By the time Bree started community college (Harper College), her ability was beginning to develop and she was earning points for her college cross country and track teams. Although, exercise would not have been enough for her, it was also important that she have stellar coaches. Coaches who were good at their jobs, but also encouraged and inspired each athlete’s individual spirit. Coaches who were kind and understanding and open to those whose stories may be a little different than the norm.  Someone who cared about every athlete, not just those who were their best.  Having been blessed with coaches like that, she continued to grow. She grew as a runner, but we also started to see growth in her school work and in her grades.  I started researching “Running and Autism” and I found other stories similar to Bree’s.  Stories of runners who have Autism and have accomplished great things as a runner, but have benefited in other areas too.

Recently, I came across an article in Runner’s World entitled “For Many with Autism, Running is a Sport that Fits”.  The article mentions how families are seeing results they never anticipated, just like we did.  Back in July, 2014 there was an article in the Washington Post entitled “Can Running Help Autistic Children?”  If you Google “Running and Autism” you will find them.  If you think your loved one could participate and benefit from a running program, I suggest you research it. There have even been some scientific studies done on the subject and hopefully more will be done in the future.

I can only tell you our story and the positive effects running has had on Bree.  She may not be the fastest runner out there with Autism, but that was never what we had in mind.  We just wanted her to be happy, to be healthy and to be accepted for who she is.  Sports did that for her. Through the sports she participates in with Special Olympics, she is always happy, healthy and accepted.  Now, she has been blessed to experience the same in her mainstreamed environment.  The growth we have seen has been amazing, not only as a runner, but as a student and an individual.

Four years ago, she started running Track and we were proud of her for finishing a race.  Her goal was to make Varsity by her senior year in high school.  It wasn’t easy, but she did crack Varsity and began earning points.  In community college she has continued to improve and grow, making All-American and breaking a school record. Recently, she signed a scholarship to run for Tennessee Wesleyan University next Fall.  There was a time we didn’t think she would be able to go to college.  Her whole life has been through baby steps, but then one day she started running and now there’s no stopping her.  We don’t know what the future will bring, but at least we feel there is a future.

Mary Ellen Bogucki is the mother of Breanna (Bree.) Bree is a twenty-year-old college student, runner, singer, special needs advocate, Special Olympics athlete and Global Messenger.  Bree has been diagnosed with high-functioning Autism, OCD, anxiety, situational depression and sensory processing disorder. Follow along as her mother describes where Bree began and how she arrived where she is today.  Mary Ellen will explain what helped Bree improve, along with some mistakes they made on their journey. By telling their story, they hope others will find hope and comfort.  Bree currently is attending Harper College in Palatine, Illinois pursuing an Associates Degree in Human Services.  She is a member of their Cross Country and Track teams and the President of the Access and Disabilities Success Club.  Harper College offers a Transition Autism Program (TAP) to help those with Autism transition from high school to college.