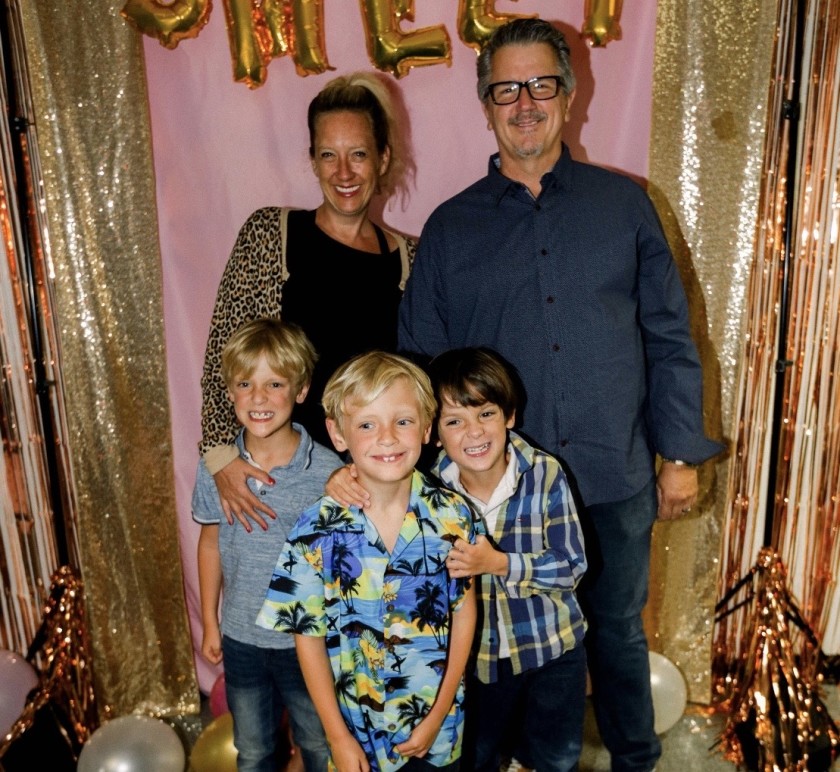 With 8-year-old triplets who go to school in Encinitas, each one on the autism spectrum, Jeff Ladman and his wife Tara felt “like the rug’s been pulled out from underneath” them when the novel coronavirus pandemic closed schools in mid-March and reduced therapy sessions to online only.

Two of their sons, second-graders Keith and Holden, have class with special education and mainstream teachers at Flora Vista and are “high functioning,” Ladman said. The third, Jarrett, is in second grade at Mission Estancia and requires constant attention. He typically has a full schedule of occupational therapy, physical therapy, applied behavioral analysis and other types of intervention.

“All of a sudden, all of those resources, or at least quite a few of them, are taken away,” he added. “All of a sudden you find yourself dealing with not only your kid, but your kid who needs a lot of support, and it’s very challenging.”

Even with teachers and instructional assistants leading the Encinitas Union School District’s distance learning, Ladman and other parents with special needs children who require more extensive, individualized attention are learning to serve as de facto teaching aides. They’re also scrambling to make sure their children maintain some semblance of the therapies and services they’re used to receiving from schools and privately.

La Costa resident Lisa Kushnir-Ansonoff said her 12-year-old son Jack, a sixth grader who has autism and cerebral palsy, is used to spending 70% of his day at La Costa Heights in special education and receiving services. The other 30% of the time, he’s in mainstream classes. Jack required a full-time aid at school to keep him focused because his attention span lasts about 10 minutes, she said. Since the school closed, she’s had to help Jack through all his courses and therapies, held through the videoconferencing software Zoom and prerecorded sessions sent to them by his instructors.

“Everything pretty much is me sitting next to him on the computer and me doing 100% of everything with him,” said Kushnir-Ansonoff, who uses mini peanut butter cups to help keep him motivated.

Kushnir-Ansonoff works as a speech pathologist treating adults who have had strokes or brain injuries, giving her a bit of an advantage in knowing how to work with her son. She’s also participated in many of Jack’s therapies since he was a baby. But for the average parent with a special needs child, she said, it’s probably been a much more difficult transition into “wearing many hats.”

“It’s really made us appreciate how hard teachers and therapists in the school are working, and what a hard job it is,” she said.

Through a special picture-typing device, Jack has also told his mom that he misses his friends at school.

Maria Waskin, the Encinitas Union School District’s director of pupil personnel services, said the sudden school closures haven’t been hard for everyone. But since EUSD already had a program that provides iPads to every student and other technology already in place, she also said it’s been an easier adjustment compared to other districts.

“There’s no question that this is not an ideal situation, and we’re all looking forward to the day that we can get back to in-person education,” Waskin said.

Because of the various public health orders still in place, the immediate future for California’s schools is still to be determined. Some businesses were allowed to start reopening earlier this month, marking the beginning of a slow, gradual return to normal.

In addition to live Zoom classes and therapies for special needs students, EUSD also has asynchronous learning tools that allow parents, some of whom still work during the day, to help their children with their schoolwork later in the afternoon.

“We’re trying to be creative about how we’re giving access to these various learning opportunities and trying to give the broadest range of possible options for parents,” Waskin said.

Molly Hildahl, whose 7-year-old daughter Sabine has autism and attends first grade at Olivenhain Pioneer Elementary, said she thinks it’s an “uphill battle” for special education teachers to be as effective through a computer screen.

Sabine typically benefits from a full schedule that includes both in-school and private services and therapies, in addition to extracurricular activities. Over the last two months, that routine has come to “a grinding halt.”

“There are no two (children) who are alike, but I would say everybody is in for a challenging time right now,” Hildahl said.

Hildahl added that she’ll gradually restart Sabine’s in-home services, but she’s worried about taking her daughter back to certain clinics and risking exposure to the coronavirus.

“We’ve got to come up with something because I think parents with special needs kids are just burning it at both ends,” she said.

For adults who have autism, including Solana Beach resident Reid Moriarty, the adjustments to the new coronavirus realities have been a little easier.

Reid, 25, hosts a podcast that has been on hiatus due to COVID-19, but will be adapted for Zoom. He also sings and plays keyboard in a band that had to cancel several April performances. The shelter-in-place orders and business closures have put an end to some of Reid’s other favorite activities, such as shopping at thrift stores, swimming at the local Boys & Girls Club and getting videos at the library.

“He’s got a lifetime of practice submitting to rules, so he’s taken it pretty much in stride,” said his mother, Andrea Moriarty, who wrote a book called “Radical Inclusion,” which details her experiences helping Reid pursue his passions, and outlining ways to create a more inclusive society.

But, she added, there’s still “the burden of imposing that structure” to avoid regression of social skills and other aspects of his intervention.

“If you’re not able to do that, there’s a lot of guilt that goes along with that,” Andrea said.

To maintain a daily routine, she gave Reid new daily goals, such as FaceTiming one person. He’s also going to have an online listening party to promote his new music.

“I think it kind of proves the thesis of the book in a sense that, no matter what, that hardwired internal drive to belong is there,” she said. “We’re all trying to be better together, even through this forced kind of exclusion.”

Photo above: (From left) Second-graders Jarrett, Holden and Keith Ladman with their parents, Tara and Jeff. (Courtesy)