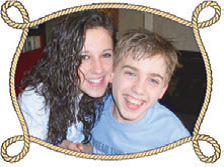 What makes things perfect is when he and I can just sit around and watch TV or listen to music together. We don’t have to talk, or we don’t have to be working on his socialization skills.

As the end of the school year approaches, I find myself cramming for finals, preparing for graduation, and planning my summer. This is about the same for everybody, where some are asking that special girl to prom, or are looking forward to starting college in the fall. But what about my brother? He isn’t asking anyone to prom. He might not ever have a first kiss. Can you imagine? Never falling in love, never getting your heart broken, never stressing over final exams, never getting your diploma, never living with a roommate, never experiencing the dorm life?

This is the part of autism that kills me. It literally rips me apart knowing that my brother might never have a shot at stressing over paying bills or thinking of a clever way to propose to his future wife. Even though some of these stressors are things that almost anyone would give up in an instant, what if you just weren’t able to do them? It’s not because you’re not allowed or because you don’t want to. You are completely unaware that they exist, and even if you do know about it, you can’t do it in the way everyone else experiences it. You have way more essential things on your mind like figuring out how to tell your mom that you are hungry, or walking around in wet clothes because you had an accident.

This gets me thinking… Every time I complained or cried over a hard time, was it really that upsetting? Having $5 in your bank account and not getting paid for another week is stressful. But what if you don’t even have the chance to make money? You don’t even get the value of money. Until you understand how to use the bathroom appropriately, you won’t even be applying for jobs, let alone get hired.

As small or as huge as some of these experiences are – I hate that Sammy doesn’t have the chance to do any of them. I want him to live the “typical” teenage life. I want him to have access to everything all of us do. It bothers me so much that because of autism, Sammy can’t do the fun things that every other teenager gets to do. Sammy didn’t choose to have autism. He didn’t do anything wrong. He didn’t get in trouble and get grounded from prom. He didn’t mess around all during high school and not get into college.

All of this also makes me sad for my other brother. As he goes through high school, I watch him participate in track, have crushes on girls, get his first job, learn how to drive… and he’s doing it all on his own. It’s not like me, where I was six years older than my brothers, so I was the only one of us going through high school when I was that age. But Sammy and Jack are so close in age, they should be going through this together. They should be giving each other a hard time for liking some girl. They should be riding to and from school together. They should be each other’s outlets for when they think our mom is being unfair. Sammy is older than Jack. He isn’t just missing out on learning how to drive or studying for SAT’s, but he is missing out on being the “big brother.” And Jack is missing out on being the “baby” of the three of us.

And this makes me question even more – is Sammy lonely? Is Jack lonely? Is Jack resentful for missing out? Is Sammy so fed up with autism because it holds him back? I wouldn’t change Sammy in a second, for he made me who I am and I love everything about him. But, I wish I knew if he was truly happy. I wish he could have everything in life and more.

Being a sibling of someone with a disability is hard, but it is also an honor. It has brought things into my life that I don’t think I would have ever had the chance of being apart of if it wasn’t for Sammy. Although there are times when I can’t take it anymore, so many favorite moments do result from being Sammy’s sister. I love taking care of Sammy and wanting more for him. But when he’s driving me crazy, I feel like that is when we are the most normal. That is when we can really be siblings. I’m not worrying about his next step or what goals we should put in place for him. I’m able to yell at him and be annoyed, just like I would with my other brother. Making a life for myself as an advocate for autism and working with people with special needs is important to me. It is a large part of my relationship with Sammy. What makes things perfect is when he and I can just sit around and watch TV or listen to music together. We don’t have to talk, or we don’t have to be working on his socialization skills. I’m not being his caregiver or therapist. I’m able to just be his sister and live in the moment with my brother.•

SIBLING TIES
Paige Talhelm, 23, lives in the Baltimore area and will begin pursuing her Master’s degree in Education of Autism & Pervasive Disorders at Johns Hopkins this coming fall. She is currently a Director at PALS Programs, an advocate for The Next Step Programs, and leads a support group for siblings of individuals with disabilities. She is the older sister of two brothers, Sammy and Jack. Sammy, 17, has autism, is non-verbal, and is not toilet trained. He is the sole reason for Paige’s push to help individuals with special needs. She hopes to one day create a program for Autism treating adults over 21 with job searching, continuing education, learning life skills, and to increase their independence. Read more about Paige’s life as a sibling of autism on her blog:www.sammyssister.weebly.com