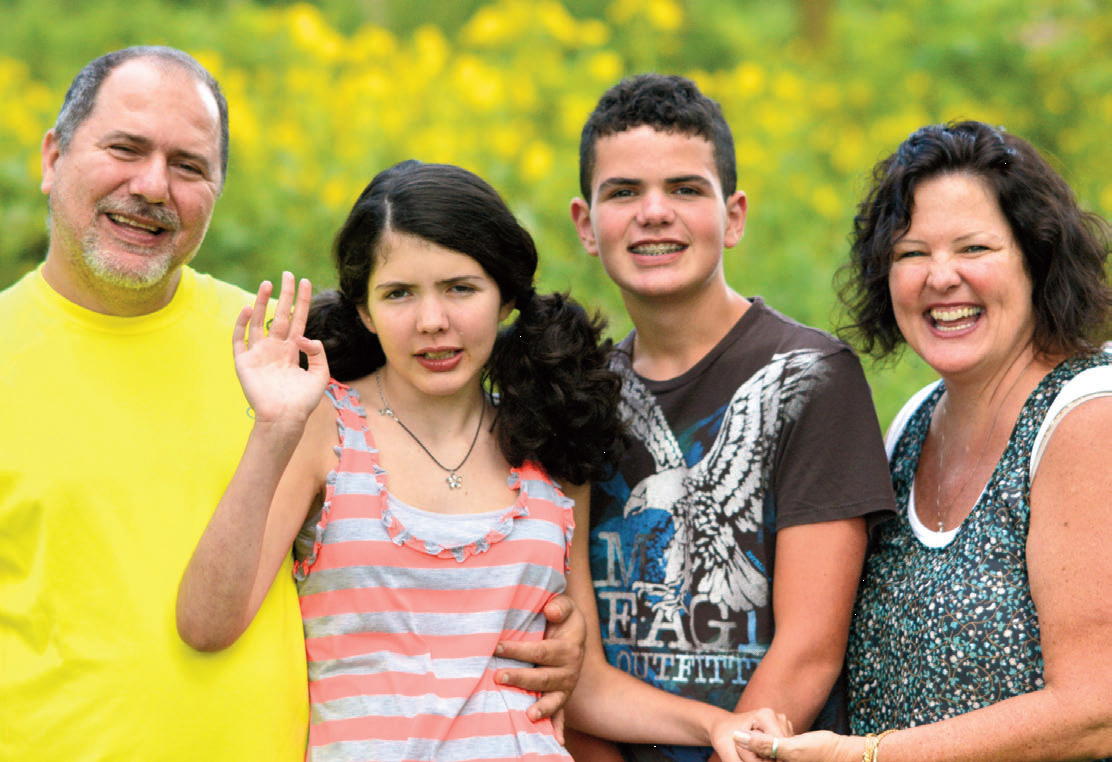 BY GAIL AND HARRY KOUJAIAN

The Niemann Pick Type C (NPC) community is very fortunate and in an envious position. For being a rare disease, there are now several clinical trials in the pipeline with more on the way.

Hayley’s childhood was mostly typical. She was a happy kid that participated in Karate, cheerleading, sports and met all her early milestones. Things however changed around 1st grade. She was clumsy and started to have issues with gross and fine motor skills. These concerns were also brought up to us by her school teacher.

By second grade, we could see Hayley struggling with school. The school suggested Hayley undergo a set of academic tests to determine her abilities and capabilities. We agreed since we also wanted to know. Couple of months later, we were asked to meet with the school to go over the results. To say that the setting was threatening is an understatement. There was the assistant principal, school physiologist, speech therapist, and various teachers in attendance. They presented us with a thick stack of papers and each teacher took his/her turn to go over the results. They all agreed Hayley had learning issues and even suggested that she had ADHD. They further suggested Hayley receive additional services within the Special Education setting of the school. We left the meeting completely overwhelmed. We were so naïve and unprepared. This was all new to us but did make us realize that we needed to educate ourselves with this process for our daughter’s sake.

At the next meeting, we had a parent advocate also attend the meeting on our behalf. Furthermore, we requested that all data that would be presented at the meeting be available to us 10 days beforehand so that we had time to read and understand what was to be presented – something we definitely suggest parents do.

And the journey continues…
Hayley did well in the Special Ed settings but we can still see her struggling with class work. She was just not able to retain the information taught to her. By fourth grade, the school suggested Hayley would thrive better if she attended a school dedicated for kids with learning disabilities who were still high functioning.

And the journey continues…
Hayley did well in this new setting. She made new friends and enjoyed attending school every day. But on March 29th, 2010, she had a seizure while on the school playground. Gail picked her up from school and rushed her to Hayley’s pediatrician where she had another seizure. We were referred to a Neurologist for further assessment. She prescribed anti-seizure medication which, unfortunately, did not work. More doctors and more seizure medications later, Hayley was operated on to remove the tissues from the brain where the seizures were coming from since the data showed the seizures were focal and not spread. After the operation, the pathologist ran some tests on the tissues which came back with evidence of a Lysosomal Storage Disease (LSD). After running several tests to identify the type of the LSD, which all came back negative, Hayley’s doctor seemed disinterested in continuing to find proper diagnosis. Comments such as “We may never know” or, “Do you really want to find out” were very common out of his mouth – something no parent wants to hear. We never gave up though and continued with our research. We listed every known LSD, eliminated the ones Hayley was already tested on; eliminated the ones where the symptoms did not match Hayley’s and came up with a short list of potential conditions. We sent the list to the doctor who finally agreed to have the hospital’s geneticist involved. He diagnosed Hayley within 10 minutes after she asked Hayley to look up and which she was unable too. Vertical gaze palsy is one of the first symptoms of Niemann Pick Type C (NPC), an inherited cholesterol metabolism disorder, which strikes 1 in 150,000 children.

We now had a diagnosis; the search for a new doctor starts and the journey continues…
The initial research into understanding NPC was very grim. NPC is always fatal. Depending on the aggressiveness of the mutation, many kids die between the ages of three to 20. Symptoms included lung and liver failure, cataplexy, delayed motor development, intellectual decline, dementia, ataxia, seizures and with most, eventually losing the ability to eat or walk. It was referred to as Childhood Alzheimer’s disease due to its similarity with Alzheimer’s, although more and more adults are being diagnosed with NPC due to better awareness campaign through programs such as Think Again, Think NPC, sponsored by the International Niemann Pick Disease Alliance (INPDA), which is a global non-profit organization supporting those affected with Niemann Pick Disease.

Further research showed the availability of a drug called Zavesca which has shown to slow the progression of the disease. It was not a cure but we thought it would buy us time for a better  treatment in the future. Unfortunately, Zavesca was not approved by the FDA, even though it was approved in 44 other countries including most of Europe and Canada. Some families were, however, having luck getting approval through their insurance due to the fact that the FDA has granted orphan drug status to Zavesca for NPC patients. After many more months of phone calls, paperwork and denials, Hayley was finally approved for Zavesca.

Unfortunately, Zavesca did not help and Hayley’s progression continued to decline. So the journey continues…
After further research and correspondence with other NPC families, we heard about a compound called cyclodextrin. The National Institutes of Health (NIH) was looking into conducting a Phase I clinical trial with cyclodextrin. We were very interested in this trial, so we traveled to NIH in Bethesda, Maryland in December of 2011 to participate in the natural history study of Niemann Pick Type C. The intent of the study was to understand the disease and its rate progression. Hayley did test after test for four straight days, from swallowing, the cognition test, to gait, to fine and gross motor skill test. At the end, we were given a score of 20. This was the NPC rating scale developed by the NIH which tracked the progression of NPC. The higher the score, the further the progression. We visited NIH again in December of 2012 to see whether there were further decline and whether Hayley would qualify for the trial. The new score was 22. Hayley did not qualify for the trial since she was still having seizures and was on too many seizure medications.
And the journey continues…

Things were not getting better. Hayley was declining further. She was no longer communicative and having issues with swallowing and gait. We knew what the outcome would be and we were desperate. We found out several families were treating their kids with cyclodextrin via the Compassionate Use program, under the Food and Drug Administration (FDA), which refers to the use of investigational drug by patients with life threatening conditions who could not participate in a clinical trial. We talked with our new doctor, Dr. Elizabeth Berry Kravis, to see if she would help us with the paperwork necessary to apply to the FDA and whether she was willing to treat Hayley every two weeks via a Lumbar Puncture, which was the only way to have cyclodextrin reach and treat the brain. She immediately said yes.

And the journey continues.
With the help of the families who were already treating their kids with cyclodextrin and who were kind enough to provide us with their treatment protocol, we were approved by the FDA and had our first infusion on December 23rd, 2013. What a wonderful Christmas present.

We just had our 74th LP infusion. We have found a way to manage this process. You have to. On treatment day, we picked up Dr. Kravis, who lives couple of miles away from us, and drove to Rush University Medical Center in downtown Chicago. We usually arrive by 8 am, do some tests, have the LP procedure and are back on our way back by 10:00 am.

So how is Hayley doing? She is doing great. Her NPC rating score right before treatment was at 31, a 9 point worsening since her last visit to the NIH. She is now at 24 and most important, stable. She has not shown any decline since treatment. She sings songs she used to sing a long time ago, she participates in many Special Olympics events and loves going to school. They take very good care of her at John Hersey High School. We realize she will never be the same or gain some of the skills already lost, but we are happy and count our blessings every day.

The NPC community is very fortunate and in an envious position. For being a rare disease, there are now several clinical trials in the pipeline with more on the way. Vtesse has gained the rights to continue to develop cyclodextrin (VTS-270) from the NIH and is actively recruiting and conducting a global Phase 2b/3 trial. Orphazyme and CTD Holdings are two other companies who are currently going through the site selection and regulatory approval processes to treat patients with NPC in the United States.

In this way, informed decisions regarding participation can be made. As the only patient advocacy group in the United States and Canada for patients diagnosed with all types of NPD, we encourage you to reach out and contact us. Web: www.nnpdf.org Email: nnpdf@nnpdf.org

ABOUT THE AUTHORS:
Harry. Dad. Of Armenian heritage. Grew up in Cyprus and moved to Chicago area in 1979. Works at Siemens Building Technologies in Technical Support department. Enjoys spending time with family, playing soccer and basket ball with his son Alec and go on bike rides with Hayley on their tandem  bike that they won with the help of the NPC community.
Gail. Mother of two, homemaker, working part time at The Nanny Tax Co and raising awareness for NPC. Grew up in Chicagoland area and now resides in Mount Prospect. Loves family time, gardening, photography, decorating, getting together with friends and music. Remains hopeful for a cure!