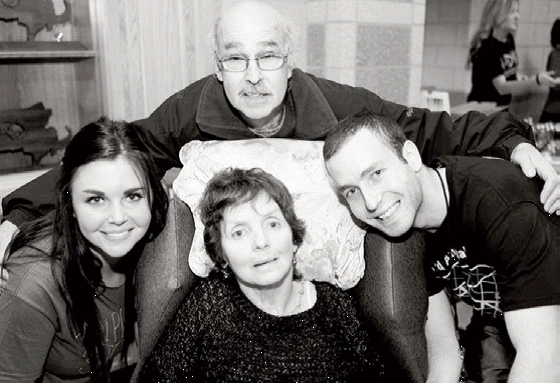 Decided it was time to come out of the genetic disease closest and own my disease:
go from hidden-HD Seth to a new Seth with no secrets.

When I was about 12, I started noticing something wrong with my mom. She wobbled from poor balance, often tripping and falling over, as if she were drunk. She had severe mood swings; one minute she was fine and the next, she was angry, frustrated, or depressed. I was confused as to what was going on and the doctors just labeled it as her being bipolar and having major depression. But we knew it had to be more than that.

A few years later, when I was 15 and my sister was off at college in Arizona, my dad and I were still trying to figure out the problem with my mom. My mom needed help and we were running out of options. After countless doctor’s visits and evaluations, we found out my mom had the rare, neurological, genetic disease known as Huntington’s Disease.

Huntington’s Disease, which is also known as HD, slowly deteriorates a person’s physical and cognitive abilities. The cognitive decline includes a loss of short-term memory, decision-making, concentration, among other things. But the worst part about the disease is that there is no cure. Once the symptoms start, the average life span is 10 to 20 years.

When my parents sat me down to tell me my mom had HD, I still did not understand what that meant. So, I did what any other 15-year-old kid would do – I Googled, “What is Huntington’s Disease?” Even though I learned more about the disease, I was still in denial and was often embarrassed by my mom’s slurred speech and wobbly movements. I would even stay at my friends’ houses, just to get away. I wanted to be “normal.” Yet, I did not realize that HD takes away the possibility of that “normal”.

It was not until college that I understood the genetic component of HD affected me as well – I was at a 50/50 chance of inheriting the disease and ending up like my mom. A coin-flip. I thought: heads I win, tails I lose. I just didn’t know which it was going to be, because to know, you need a genetic test.

Regardless, I felt like I needed to do something. I began to realize that all those past years of my mom acting  differently was truly not her fault and it was actually the HD that caused my family so much stress. Part of me felt guilty for how I treated her and wanted to do something to make up for it. My friend, Max, and I decided to organize a 3-on-3 basketball fundraiser called Hoops for Huntington’s to raise money and awareness for Huntington’s Disease. You could also say this was my way of coping with the disease and keeping my mind off of wondering what my genetic fate would be.

However, I could not help but think about testing because of the impact it will have on my future. I wanted to make sure I could plan my future accordingly, no matter what happened. Without knowing my gene status, I would not be able to better plan what lies ahead for me such as a wife, kids, a house, and career. I became exhausted and drained on a daily basis and I ultimately decided I did not want to live with the unknown.

I walked into the exam room feeling a bit nervous, yet calm. My neurologist introduced me to the genetic counselor who was not at my first appointment. I realized it must mean bad news. He then said “Seth, your genetic test came back positive for Huntington’s Disease.” I had already known, deep down, that I had the disease, but now this was confirmation that it was for real. I was in shock.

Coming out of the testing process, I told a few friends and I was very fortunate for their support throughout the whole process. Yet, apart from those friends, I’d put myself in a genetic disease closet, closed the door, and hid my results from everyone else.

Knowing I had Huntington’s did give me extra motivation in life. I joined a few HD organizations and was supporting young people and families impacted by the disease. I started doing more fundraising and helping with advocacy efforts. I was feeling pretty good about how things were going.

In 2013, my life hit a turning point. My senior year of college, the day before my last semester, my good friend, Jake, unexpectedly died in an accident. His favorite quote – he even had it in his yearbook – became inscribed on his headstone: “Live as if you were to die tomorrow, learn as if you were to live forever.” I thought to myself “How can I keep his memory alive by living my own life to the fullest?” As I still mulled this over for some time, I lost another friend, Meghan, who had a version of HD that took her life at the age of 26. Meghan had always shared her story to raise money and awareness for the disease. She never hid her disease, but instead used it to inspire others.

It made me think more about my HD secret. Why keep going on in life keeping a part of me hidden from the world? Despite Jake and Meghan’s circumstances, their positive outlook on life inspired me. Jake’s legacy wanted me to make the most out of life. Meghan’s example showed me I could be open and use my own disease to accomplish that. I decided it was time to come out of the genetic disease closest and own my disease: go from hidden-HD Seth to a new Seth with no secrets.

Before I could do that, I needed to tell my dad and sister. I told them separately, starting with my dad. I walked into the living room, sat across the couch from him and told him I had something important to say. I could not get the words out. After a long silence, he looked at me and said, “Why are you so nervous? What is it? Come out with it?” I said, “Dad I’ve tested positive for Huntington’s Disease.”

I was expecting him to be upset and even frustrated for keeping this from him. Yet, I have never seen someone so calm. He simply said “Okay.” I was in disbelief: “That’s it?” He explained that he was not worried based on all the research happening. He said it is important to stay positive because, soon enough, there will be a cure for it. It was reassuring to know my dad was going to stick by my side just like he did with my mom.

I then told my sister and I feared telling my sister wasn’t going to be as easy as telling my dad. But of course, I was wrong. After telling her she asked some questions about it but was very supportive. Mostly, she was just shocked, like so many others, that I had kept this a secret for two whole years.

After telling them, I felt so relieved. I was finally out of my closet – people were now aware of my hidden secret: the HD. And better yet I knew my life purpose: sharing my HD journey and mentor young people facing adversity in life. Whether it is HD related or another challenging circumstance, helping young people is what makes me happy and who I am today.

Instead of letting HD define and defeat me, I found ways to use my disease to improve my life and the lives of others. Over the past couple years, I’ve met people I never would have met, been involved in organizations I never would have helped, and had experiences that my hidden-HD Seth never would have had the opportunity to enjoy. In 2015, I was awarded the HDSA Youth of the Year award, and in 2016 I was a recipient of the Heroes Among Us Award from the Boston Celtics. Even though I am still fairly young, I sit on the Board of Trustees for the Huntington’s Disease Youth Organization (HDYO), whose mission is to support young people around the world impacted by HD. The past couple of years, I’ve been able to help out at the HDYO Youth Camp and actively and intimately help young people affected by HD learn how to make their life better as well.

Recently, I was invited to speak at TEDxNatick and share my HD story to inspire others. It was an unbelievable opportunity to meet and listen to so many other people’s experiences. I hope to continue finding opportunities to use my experience to help others learn more about HD and find ways to make life better, no matter where they are at now.

Each day is a new day and you have the opportunity to make the most of it. What’s your next step to a better tomorrow going to be? •

ABOUT THE AUTHOR:
Seth Rotberg is currently pursuing a master’s in nonprofit management at DePaul University in Chicago. He is passionate about bringing his personal experience to working for non-profit organizations. He has more than seven years of experience working and volunteering with a variety of youth development nonprofits.
Contact: Seth@hdyo.org; 508-988-5888

PHOTO ABOVE: SLOW TO SHARE: Seth with his sister, Julie, his dad, Alan, and his mom, Debbie. “Coming out of the testing process, I told a few friends. But, apart from them, I’d put myself in a genetic disease closet, closed the door, and hid my results from everyone else.”