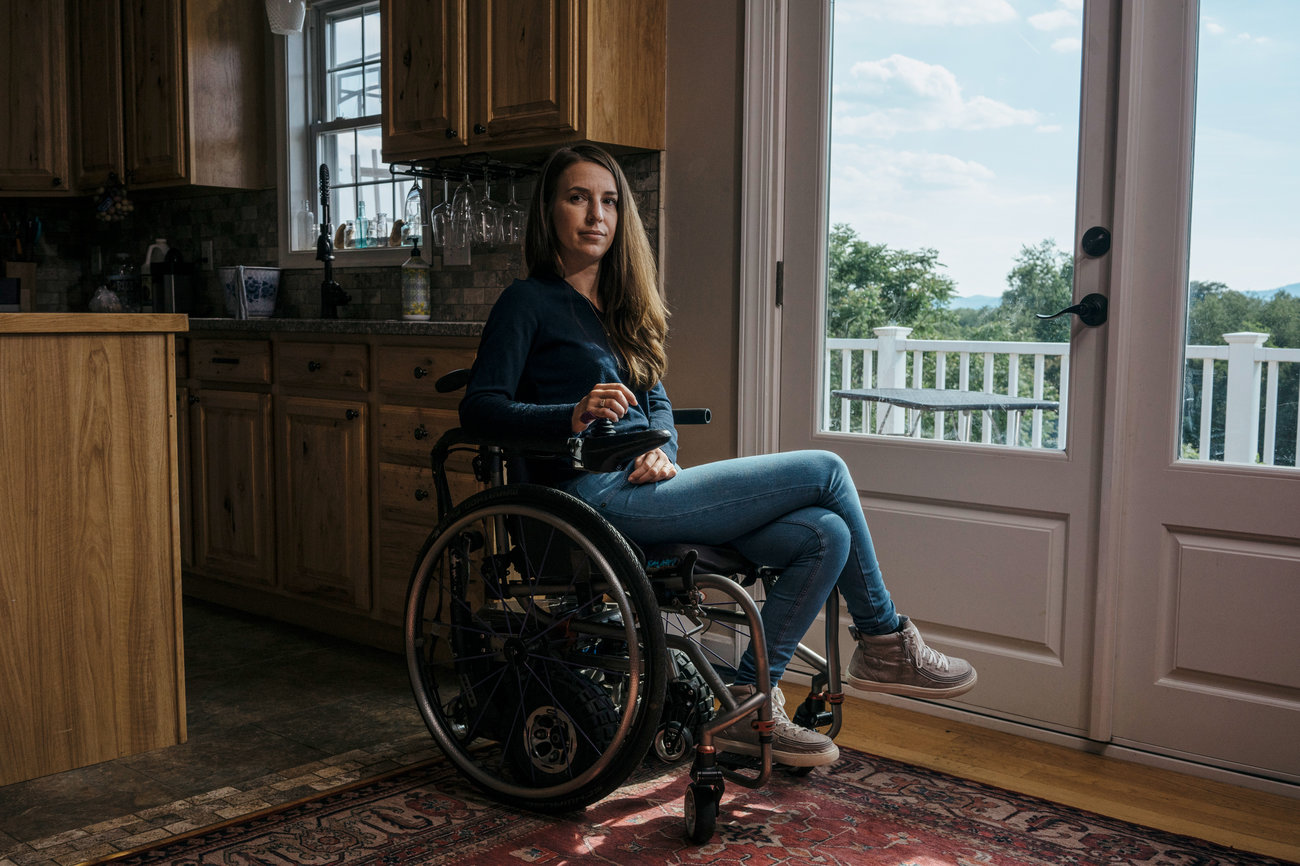 Main Photo: Dani Izzie at her home in rural Virginia. More than a decade ago, she slipped in the bathroom and suffered a spinal cord injury that has left her unable to walk. She works as a social media manager for Spinergy, a company that makes high-performance wheels for wheelchairs.

During and after the Great Recession, people turned to disability rolls in large numbers to make ends meet. This accelerated what had been going on for a generation, as the federal government’s disability insurance program saw steady growth.

But now, for the first time in decades, the disability rolls are shrinking. More people with disabilities are returning to work and holding on to their jobs. With unemployment at a nearly 50-year low, companies are struggling to find workers. And that means people who had trouble finding a job in the past are suddenly in demand. That includes people with disabilities.

Dani Izzie was hired four years ago as a social media marketer for Spinergy, a company that makes wheels for wheelchairs. Izzie is not just a marketer for the company — she’s also a customer.

A decade ago, she slipped in the shower and suffered a spinal cord injury that left her unable to walk. For five years, she collected disability insurance from Social Security. But she was determined to go back to work. When Spinergy hired her, they did have to make some changes in their Carlsbad, Calif., offices.

“The bathroom door was extremely heavy, so I was unable to enter and exit the bathroom,” Izzie says. “It was a very easy fix for them. I don’t think it cost a lot of money.” 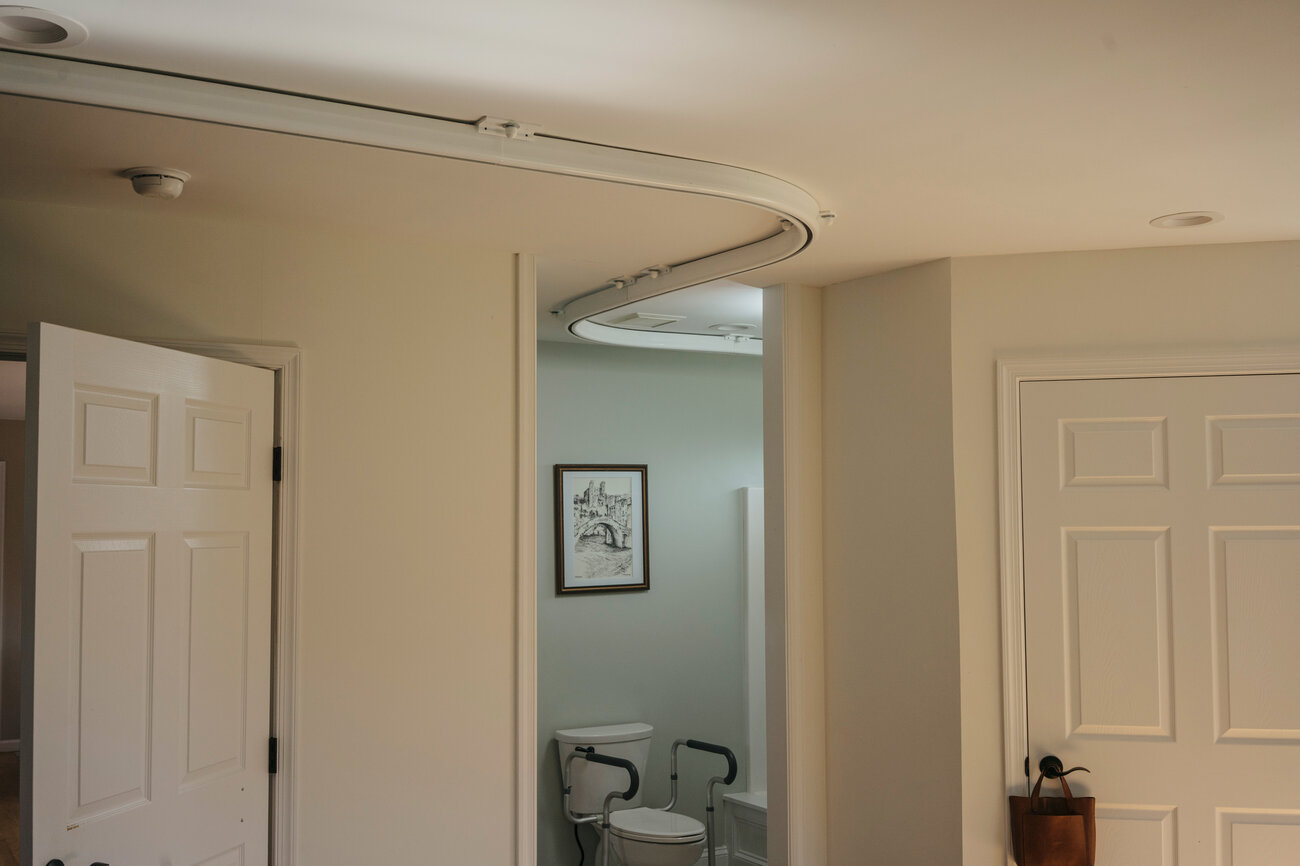 The track for a lift that runs from Izzie’s bedroom to the bathroom helps her get out of bed or the shower.

In today’s tight labor market, more employers are willing to make that kind of adjustment to recruit or retain a talented worker.

Spinergy also welcomed Izzie’s service dog, a yellow lab named Zandra. She’s able to retrieve things when Izzie drops them. And while Zandra is trained to stay out of the way, she’s also a great social icebreaker for people who might otherwise be awkward when talking with someone in a wheelchair.

These days, Izzie works remotely from a house in rural Virginia, where she lives with Zandra, her husband Rudy and a more talkative dog named Blue.

It’s still unusual for people to leave the disability program and return to work. Less than 1% of recipients do so each year. But the numbers have been growing as the job market has improved. In 2017 more than 51,000 people traded disability checks for paychecks, up from about 32,000 four years earlier.

At the same time, aging baby boomers are moving from disability into retirement, and the government has made it harder to qualify for disability benefits.

“I’ve seen a major, major change in the thoroughness and the difficulty of getting a claim approved,” says Abbey Herrin Clarkson, an Alabama lawyer who helps people applying for disability. “People that were typically approved in 2010 may not necessarily be approved now.”

When jobs evaporated during the Great Recession, many people turned to disability as a kind of de facto unemployment insurance. By 2013, nearly 1 out of every 4 workers in parts of Alabama was collecting a disability check.

Since then, the state’s disability rolls have shrunk by 15%. It typically takes Social Security more than a year to review a disability application. Clarkson says more of her clients are now finding work during that period, as employers have grown more willing to make allowances.

“Someone into their 50s, someone who maybe has a medical history with some surgeries, maybe they need some sort of accommodation,” Clarkson says.

Of course, many people on disability are simply unable to work — but not everyone.

About “98% to 99% of all the people I run into would much rather work than collect a disability check,” Clarkson says.

“There’s only so much Judge Judy you can watch,” says Michael Sersch, a counselor who works with disabled people in Wisconsin.

Many people who become disabled suffer from anxiety and depression when they can no longer work.

Angel Salva reluctantly left the Air Force six years ago because of a bad back. He and his wife had just had their first son.

“It was scary,” Salva says. At the time, he thought: “Now I’m not able to provide for my family. I had a ton of challenges.” 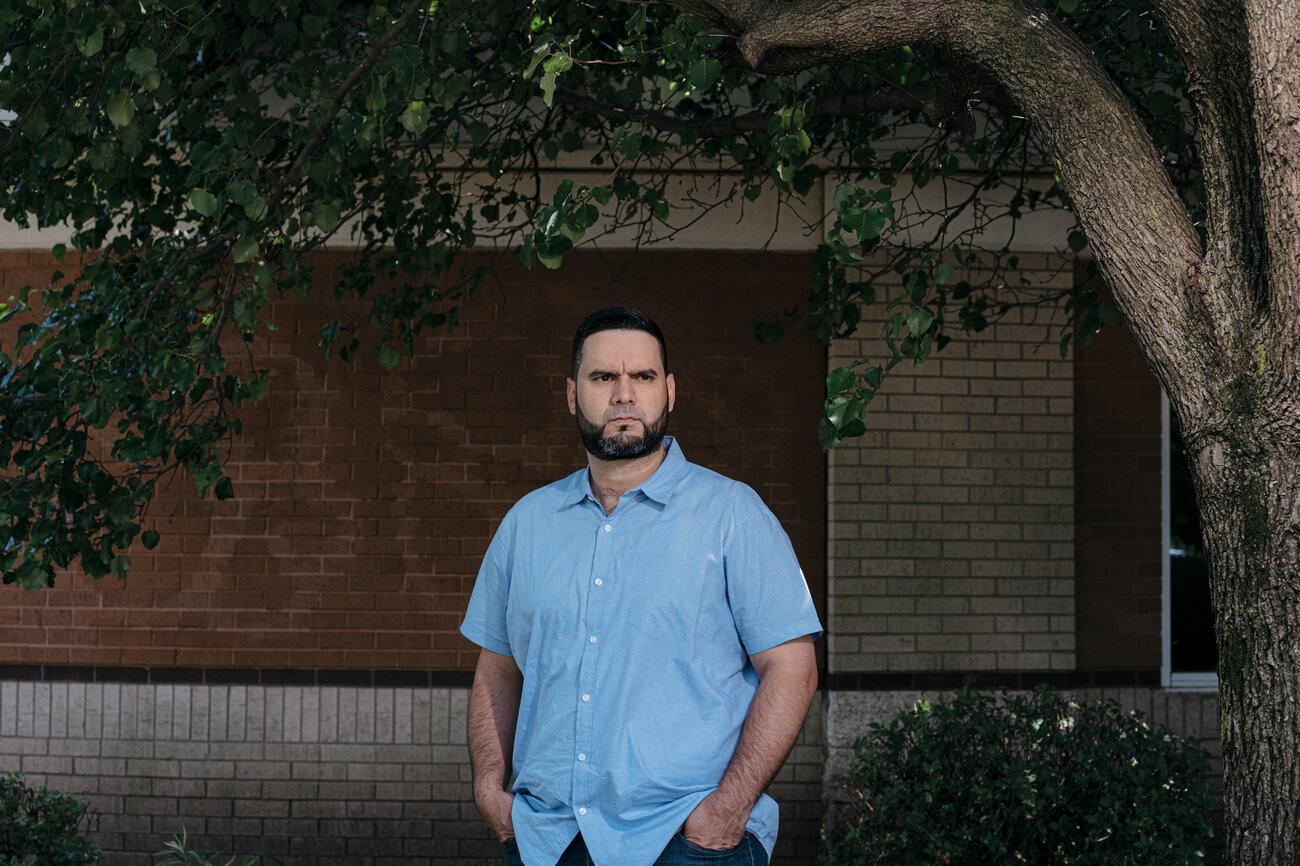 Angel Salva suffers from chronic pain from his neck to his lower back. It forced him out of the Air Force after a dozen years in the service. He has reentered the workforce as an IT specialist for a defense contractor.

After several years on disability, including a battle with thyroid cancer, Salva found a job doing IT work for a defense contractor. He still suffers from chronic pain and has trouble sitting for long periods. But his boss purchased some ergonomic furniture and allows Salva to work flexible hours.

“I’m no longer sitting home, thinking about what’s going to happen tomorrow,” Salva says. “I take it one day at a time.”

Giving up the guaranteed income and health benefits that come with disability is a considerable gamble. Salva took advantage of a program designed to make the leap back into the job market less risky. It allowed him to keep his disability benefits for a trial period when he first returned to work.

“It was always a dream to serve my country,” he says. “I joined the Air Force at 18 years old and I was intending to have a 20-year career. That was cut short, not on my terms.” But he says he learned that “there’s a market for every skill set out there.”

The Trump administration wants to encourage more people with disabilities to work — both to meet the demands of a growing economy and to save the government money. The president’s budget calls for savings of more than $47 billion in the disability program over the next decade.

One of Trump’s economic advisers has long had a personal interest in the disability program.

“My dad was a steelworker, and when the plant closed down, he was out of work and in his late 50s,” says Richard Burkhauser, a former professor at Cornell University who now serves on the Council of Economic Advisers.

Burkhauser encouraged his dad to apply for disability, rather than looking for another job. He later came to second-guess that advice. He suspects being out of work may have contributed to his father’s death just a few years later. “Because his whole life was work, and I think it affected him,” Burkhauser says. “As a last resort, I think it’s fine to be on these rolls. But if we can get people with disabilities to get into the workforce, it would be much better.”

Burkhauser says the hot economy has done more to move people off disability than any policy changes dreamed up in Washington. The drop in disability rolls has been so sharp, last month forecasters said the trust fund that helps pay those benefits will last 20 years longer than had been expected.

Izzie agrees that a tight job market is opening doors for people with disabilities. But she warns that many still face discrimination. If employers can overcome that, Izzie says, they will be rewarded with workers who are adaptable, flexible and persistent.

“The can-do attitude, the creativity involved in living life with a disability, honestly, that attitude is an asset to an employer,” she says.

As the number of disabled workers grows, more employers are finding that out. 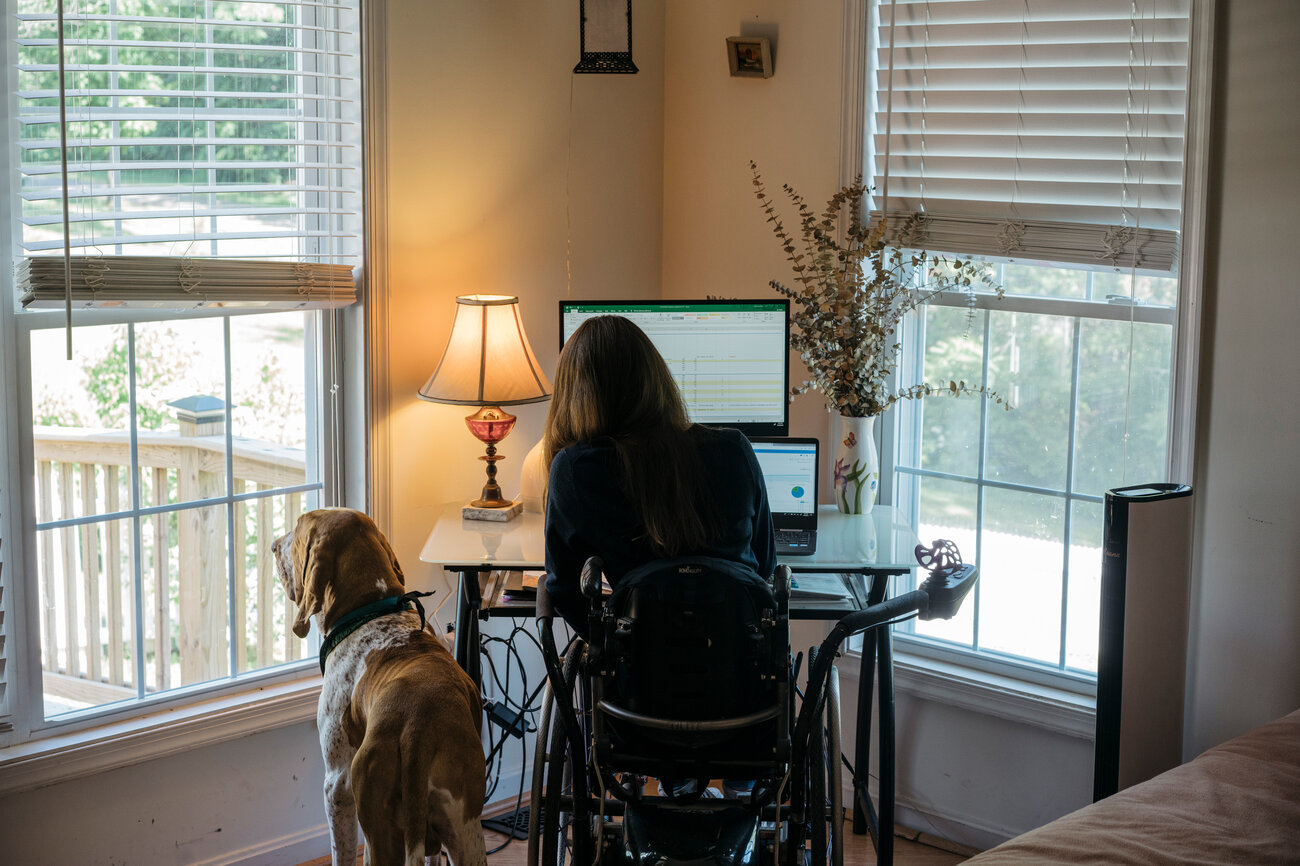 Izzie works remotely from her house in rural Virginia. She says a tight job market is opening doors for people with disabilities. But she warns that many still face discrimination.